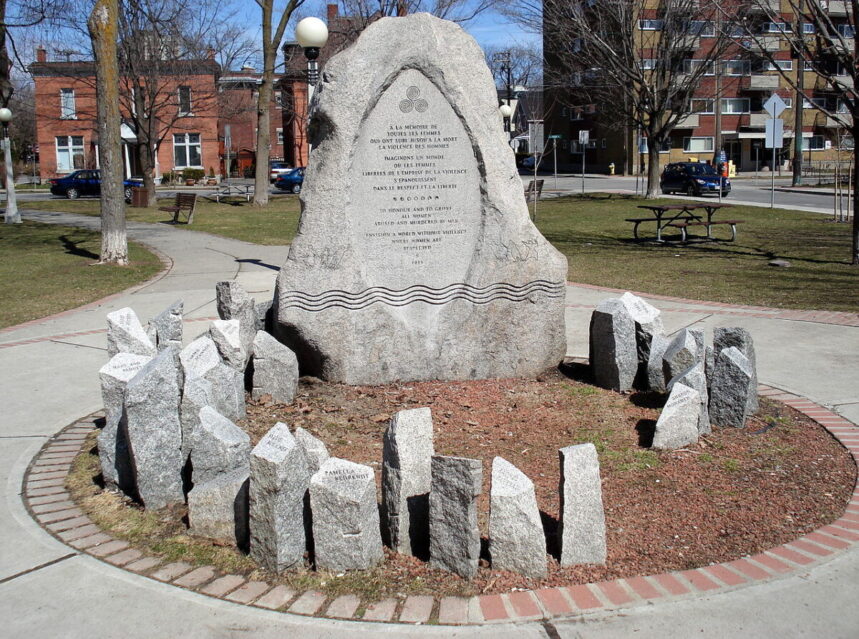 The 30th anniversary of the worst mass shooting in Canadian history was commemorated at Toronto’s City Hall this morning as part of the National Day of Remembrance and Action Against Violence Against Women.

A statement released by the Government of Canada declares, “It has been 30 years since the tragic mass shooting at l’École Polytechnique de Montréal (December 6, 1989) that saw the promising lives of 14 young women cut violently short. This senseless act of targeted violence shook our country and led Parliament to designate December 6 as The National Day of Remembrance and Action on Violence against Women.

At City Hall, Toronto Mayor John Tory read out the city’s proclamation for the National Day of Remembrance and Action on Violence Against Women.

“We remember the 13 female students and a female administrator who were singled out and killed because of their gender, and the 10 more women who were injured.”

“The effects of this tragedy continue to be felt and women remain targets because of their gender. This day presents an opportunity to acknowledge that violence is a daily reality for women and girls, and to remember those who have dies as a result of gender-based violence.”

“Ending violence against women and girls can be achieved through continued anti-violence education programs and constant reminders of our responsibility to treat all members of society with dignity and respect. Eliminating violence against women and girls can also be achieved by our individual actions in naming the violence when we witness it and supporting those who are affected by violence, whether it be at home, school, the workplace or public squares.

The proclamation continues to say: “The city of Toronto continues to take a leadership role in working towards building a society in which everyone has the right to live freely and in conditions of dignity, respect and peace. Through legislation, policies, programs and services, we will continue to promote equity for our employees and residences.”

PM Justin Trudeau spoke in Parliament today saying, “In 30 years things haven’t changed enough. It’s more than time to end violence against women. It’s more than time to build a country where everyone is safe and everyone’s rights are respected and realised… Mr. Speaker, actions speak louder than words. We have to do more because still today our communities are mourning the loss of our loved ones because of armed violence. It’s time to take real steps to end gun violence in Canada. We need to do something to ensure that never happens again for our sisters for our daughters and for our mothers.”

Andréanne Larouche who represents the electoral district of Shefford for the Bloc Quebecois addressed parliament with a passionate heartfelt speech.

“30 years later the entire province of Quebec still lives with this weight. We all lost something that day… They were just students trying to go about their normal lives… A school is where we want our children to go learn, find a career and do the best they can. This cowardice, this hatred this misogyny hit so hard that day. It’s not enough to remember. 30 years later we need to continue the fight so that never again will an incident like that which happened December 6, 1999 will occur… Let us commit to fight misogyny, to fight hatred and to fight violence against women. This commitment needs to go beyond words,” stated Larouche. “We can also act against daily violence against women. For those women we lost and for all women…let us act.”

This was followed by an enormous round of applause.

Statement from the Government of Canada

As we come together to commemorate this national tragedy, we also reflect on the troubling fact that for women, girls and LGBTQ2 individuals across our country violence continues to be a daily reality. Violence will have impacts on their physical, sexual and reproductive health. They may experience anxiety and a reduced ability to participate in social and economic activities, leaving gaps in our workplaces and in our communities as a result of violence.

The National Day of Remembrance and Action on Violence against Women is about honouring those who have experienced gender-based violence; it is also a time to take action. December 6 falls within the 16 Days of Activism against Gender-Based Violence and this year’s campaign #OurActionsMatter calls on each of us to share the concrete actions we are taking in our own communities and in our own lives to question, call out, and speak up against acts of gender-based violence.

We all have a role to play in creating a culture of respect and taking meaningful action to ensure that tragedies like l’École Polytechnique de Montréal never happen again.