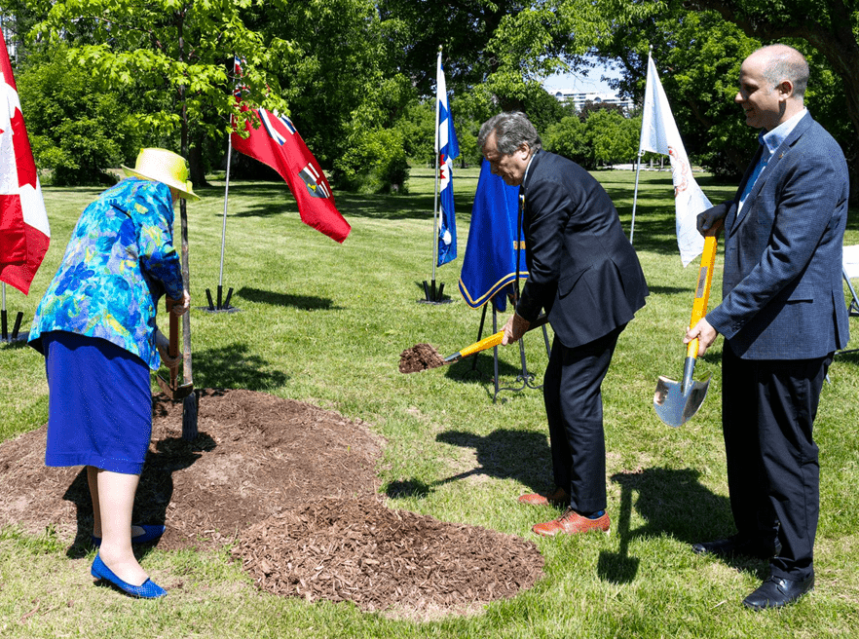 TORONTO, June 6, 2022 – Today, at a tree planting ceremony at Rowntree Mills Park, Mayor John Tory was joined by Lieutenant Governor the Honourable Elizabeth Dowdeswell for the ceremonial planting of an oak tree and unveiling of a commemorative plaque to mark the Platinum Jubilee of Her Majesty Queen Elizabeth ll.

This year, Canada and the Commonwealth will mark 70 years of the reign of Her Majesty Queen Elizabeth ll. The Queen is Canada’s longest reigning Sovereign and the first to celebrate a platinum jubilee. For 70 years, Her Majesty has exemplified service to Canada and Canadians. The City of Toronto congratulates Her Majesty upon this historic occasion.

To celebrate this unprecedented anniversary, the City has planted 70 large trees, one for each year of the Queen’s reign, throughout Rowntree Mills Park. The last tree planted was the City’s new Official Tree, an oak tree. The planting of trees supports the Plant a Tree for the Jubilee and Queen’s Commonwealth Canopy (QCC) initiative. The QCC is a unique initiative that unites all 54 Commonwealth countries in the goal of conserving forests for future generations.

“On behalf of all Torontonians, I am thrilled to congratulate Her Majesty Queen Elizabeth II on this momentous and historic anniversary. For many, she is a dearly beloved and respected figure and the only Sovereign several generations have known. For the past 70 years, Her Majesty’s presence has been felt by Canadians and we are proud to celebrate her reign with this living tribute in Rowntree Mills Park,” said Mayor John Tory. “The Queen has planted more than 1,500 trees in her lifetime at official events so it is only fitting that Toronto would choose to honour the Queen’s Platinum Jubilee through the planting of 70 trees, something the Queen cares deeply about,” said Tory.

The City acknowledges the Department of Canadian Heritage for their grant which has contributed to the planting of trees today.

On June 2, in celebration of the date of Her Majesty’s coronation and to coincide with the culmination of events taking place in central London and across the Commonwealth, the City raised the Canadian Platinum Jubilee Flag at Nathan Phillips Square, illuminated the Toronto sign purple and illuminated the CNE Princes’ Gates at Exhibition Place.

“I am delighted to join the City of Toronto for a ceremonial planting and plaque unveiling at Rowntree Mills in commemoration of Her Majesty The Queen’s Platinum Jubilee. Planting trees is the perfect way to honour Her Majesty’s life of service, commitment to environmental stewardship and abiding belief in the next generation of Canadians. Urban forests are key to the future health and wellbeing of our planet, and I salute the City of Toronto for establishing this living tribute – 70 trees that will help keep Toronto vibrant and green for generations to come!”– The Honourable Elizabeth Dowdeswell, Lieutenant Governor of Ontario

The Queen, with the Duke of Edinburgh, has visited Toronto seven times, starting in 1951, with the last in 2010. Many of the visits marked important milestones in Toronto such as visits to City Hall, Old City Hall, opening the Scarborough Civic Centre, visiting Etobicoke Civic Centre and dedicating the Peace Garden on Nathan Phillips Square.