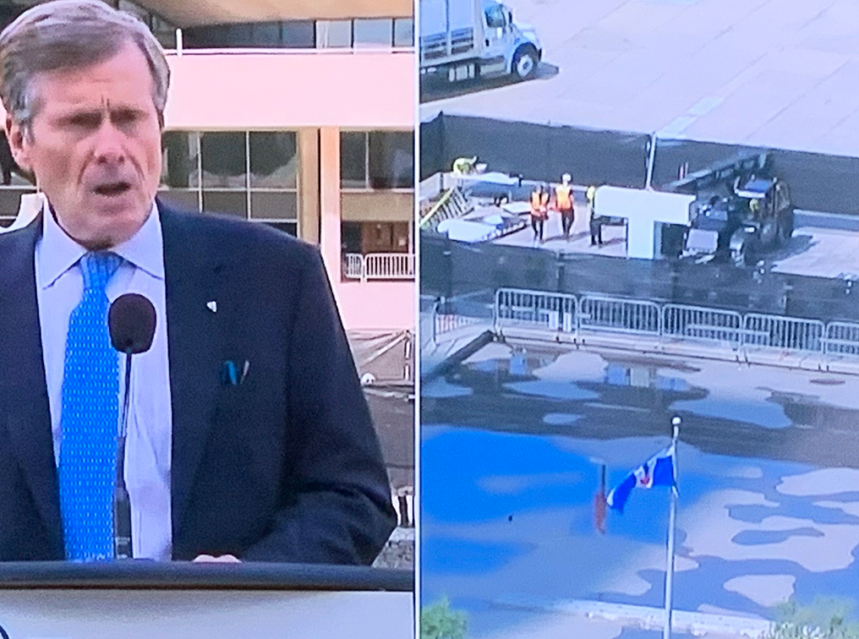 An iconic Toronto attraction, the original Toronto Sign has been a popular spot for selfies and group photos among residents and visitors alike. It was installed as a temporary structure in July 2015 for the Toronto Pan American and Parapan American Games. Although it was only built to last a few weeks, in response to the sign’s popularity, the City extended its presence on the square indefinitely and it has become a Toronto landmark.

The removal of the temporary sign, installation of the new sign and the wrap application will take approximately one week. The new Toronto Sign will be unveiled in the coming days.

Mayor Tory told CP24 that after more than five years, the original sign was showing significant wear and tear and ongoing repairs and enhancements have been required to keep it working.

“As we embark upon the work to rebuild our city from the significant impacts of the covid-19 pandemic, it is fitting that installation of the new, more durable Toronto Sign is underway,” said Mayor Tory. “I know when we get through this, Toronto will shine brighter, just like the sign itself. Like our iconic Toronto Sign, together, I am confident that we will rebuild a Toronto that is inclusive, dynamic and resilient.”

Toronto’s mayor likened the original sign to an old car, saying at some point it is time to get a new one rather than paying for further, ongoing repairs and maintenance of the temporary structure, in September 2019 the City began the process of procuring a new more durable sign.

“I don’t think anyone can imagine Nathan Phillips Square without the now iconic Toronto Sign,” said Deputy Mayor Michael Thompson (Ward 21 Scarborough Centre) and Chair of the Economic and Community Development Committee. It has brought our city together to celebrate our achievements, mark occasions and raise awareness, all while providing a spectacular selfie back drop.”

In December 2019, after an open and competitive process, the City awarded a contract for the design, construction, installation and ongoing maintenance for a new Toronto Sign to Unit 11, a Toronto-based custom design and fabrication supplier for the television, film, entertainment, and marketing industry.

Tory says the new and improved Toronto Sign will be easier to clean, waterproof, and will have augmented lighting capacity and other creative features to support public engagement and interaction.

The City will retain the sign’s maple leaf, which was installed in 2017 to celebrate Canada’s 150th birthday, and the medicine wheel, which was installed on June 21, 2018, in consultation with the Toronto Council Fire Native Cultural Centre to honour National Indigenous Peoples Day.

Since then, the Toronto Sign has become symbolic of Toronto. According to a Destination Toronto visitor survey, the Toronto sign was one of the top three most visited attractions in the city and it is consistently ranked as one of the most Instagram-worthy spots.

The image of the sign is captured daily by local media and it has been a visual backdrop for international media coverage of major events from the 2015 Toronto Pan American and Parapan American Games and the 2017 Invictus Games to the 2019 Toronto Raptors’ NBA championship. The sign has also been illuminated and dimmed for hundreds of charities, community festivals, days of significance and times of mourning for the city and its residents.

As previously announced, the City is using reserve funds to pay for the new sign and existing operational budgets to cover the ongoing cost of maintenance and vinyl wraps. The cost of the design and construction of the new sign is $490,000 net applicable taxes. Removal of the old sign, installation of the new sign, wraps, a three-year maintenance contract, contingency and optional enhancements bring the total cost to $761,842 net applicable taxes.

The City is open to philanthropic support to be able to enhance the features of the sign. Interested donors are requested to contact the Toronto Office of Partnerships at 416-392-6121, top@toronto.ca or donations.toronto.ca/.

Photographs of the Toronto Sign can be shared with the hashtag #xoTO and #TOsign. More information about the sign is available at toronto.ca/TorontoSign.