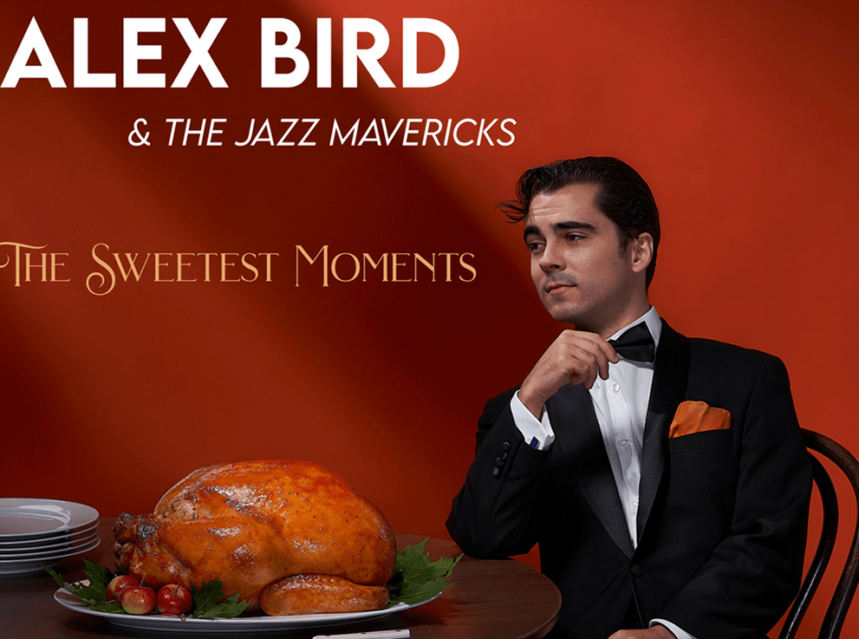 Titled “The Sweetest Moments” and written and performed by Bird, Ewen Farncombe and the Jazz Mavericks, the track captures that fall, Thanksgiving feeling, where the air is crisp, and you can almost hear the laughter of your favourite people around the table and smell the turkey roasting.

“Thanksgiving is one of the sweetest holidays, which is why we couldn’t believe it didn’t have a song,” said Bird. “When we set out to write a Thanksgiving song, we thought about the sounds, the sights, the smells, the faces, the turkey and really tried to encapsulate that in a tune.”

Bird’s quest to write and produce The Sweetest Moments was supported by Think Turkey, the marketing arm for Turkey Farmers of Canada and the Canadian Poultry and Egg Processors Council’s Turkey Primary Processing sector.

“Thanksgiving brings some of the best traditions of the year and Alex and The Jazz Mavericks have beautifully channelled the spirit of the holiday,” said Darren Ference, Chair, Turkey Farmers of Canada. “We’re thankful for the opportunity to support incredible Canadian talent and hope the song becomes a Thanksgiving classic.”

Think Turkey was so moved by the song it will be featured in a new 30-second Thanksgiving ad that airs nationally on broadcast TV, online video and social.

“It means a lot that Think Turkey got behind us and wanted to put this song out there,” said Bird. “It was a natural collaboration! This song wouldn’t be possible without Thanksgiving. And Thanksgiving wouldn’t be the same without turkey.”

Bird has been on the Canadian jazz scene for nearly four years, earning his first JUNO nomination in 2022 for his sophomore album, You Are the Light and the Way. His soft swinging voice and tremendous songwriting talent is pushing the boundaries of jazz and bringing it into the modern era. Bird and The Jazz Mavericks hope this new song reaches Canadians of all ages and inspires them to gather with loved ones and celebrate.

“After the last few years, a real Thanksgiving has felt like a long time coming, as Alex sings in his song,” said Jean-Michel Laurin, President & CEO, Canadian Poultry and Egg Processors Council. “We hope The Sweetest Moments inspires Canadians to come together and celebrate again.”

“The Sweetest Moments” can be streamed on Spotify, iTunes, Apple Music, and Bandcamp, and can be requested on any Canadian radio station.

About Alex Bird & The Jazz Mavericks

Alex Bird is a JUNO nominated jazz singer, songwriter, and actor in Toronto, ON. Alex and his band “The Jazz Mavericks” are working on an entirely new chapter of the Great American Songbook; they are pushing the boundaries of a beautiful tradition and bringing it into a new era. Bird’s original debut album “Whisky Kisses” (Oct 2020) received reviews, awards, airplay, and distribution around the world. To learn more please visit Alexbird.net.

What Is Think Turkey?