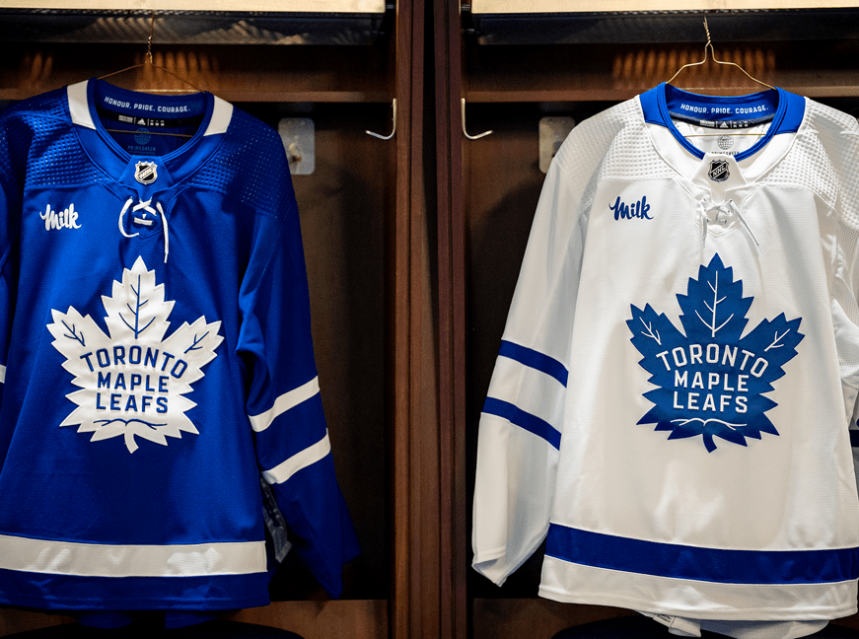 Toronto Maple Leafs will don the Milk logo on their jerseys this NHL season, partner with Dairy Farmers of Ontario

TORONTO, Sept. 20, 2022 – With the Toronto Maple Leafs have just adding ‘Milk‘ to their jerseys it goes without saying that fans will be milking the move for quite some time. The biggest news in Leafs nation today is the team’s announcement that they are adding a Dairy Farmers of Ontario’s “Milk” patch on all their game sweaters starting this NHL season. The Maple Leafs say they are building on the two organizations’ multi-year partnership to support healthy active living, community programming and access to hockey for players and fans everywhere.

The multi-year agreement comes into effect as the NHL introduces an unprecedented sweater partner branding program to all clubs this season.

“Just as milk nourishes healthy bodies, Ontario’s dairy farming families proudly nourish healthy communities, and that’s been the focus of our ongoing partnership with the Toronto Maple Leafs,” said Cheryl Smith, CEO of Dairy Farmers of Ontario (DFO). “Placing our Milk logo on the Leafs’ sweaters is a symbol of this shared commitment, and of milk’s role in building strong bodies and healthy lives.”

DFO’s “Milk” insignia will appear in the upper right chest area of the Maple Leafs’ home, road and specialty sweaters. Fans will first see it in action as the Maple Leafs open their preseason exhibition schedule with a double-header against the Ottawa Senators at Scotiabank Arena on Saturday, Sept. 24 (1 p.m. and 7 p.m. start times).

“Given our pride in our partnership with Dairy Farmers of Ontario, and the immense benefits of milk to both elite and everyday athletes, it’s a perfect fit to see the blue-and-white Milk logo on the Maple Leafs’ iconic blue-and-white sweaters,” said Jordan Vader, Senior Vice President, Global Partnerships, at MLSE. “Alongside MLSE and DFO’s shared values of support for grassroots initiatives, we look forward to further grow our partnership to reach the next generation of fans and give back to communities across Ontario.”