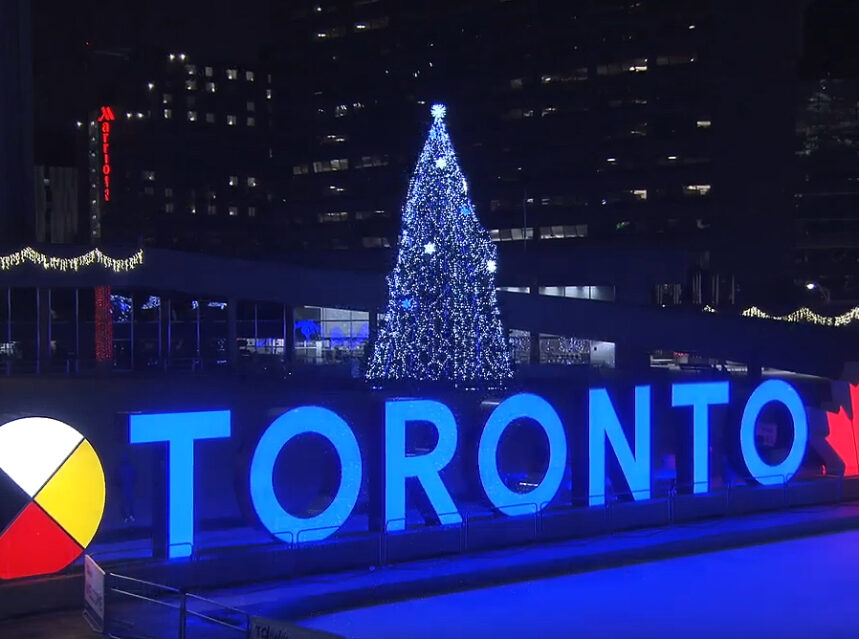 TORONTO, Nov. 13, 2022 – Yesterday, the City of Toronto signalled the start of the holiday season, welcoming its official 16.75-metre (55-foot) Christmas tree to Nathan Phillips Square. Tree decorations and preparations for the city’s hugely popular 56th annual Cavalcade of Lights presented by Desjardins Financial Group will begin on Tuesday, November 15. Cavalcade of Lights will kick off on Saturday, November 26 and run until Saturday, January 7.

This year’s naturally grown spruce tree came from Baldwin, Ontario. A crew of up to seven people will install the tree over approximately eight hours. The tree will require three days to settle before it can be decorated with more than 300,000 energy-efficient lights and 500 ornaments. It will remain on display throughout the holiday season and will then be recycled into mulch for tree planting in the spring. The Christmas tree lighting is sponsored by Toronto Hydro-Electric System.

Saturday, November 26 is the official opening day of Cavalcade of Lights presented by Desjardins Financial Group. Family-friendly special programming will begin at 3 p.m. and run until 11 p.m. A tree and Square lighting ceremony will take place at 8:30 p.m.

Following opening day, Cavalcade of Lights presented by Desjardins Financial Group will run until January 7, showcasing twinkling light displays and festive décor alongside public skating on the Square. This year, the event takes inspiration from light festivals and cultural celebrations around the world and features elements from a variety of holiday traditions associated with light, lantern and fire for new lighting installations.