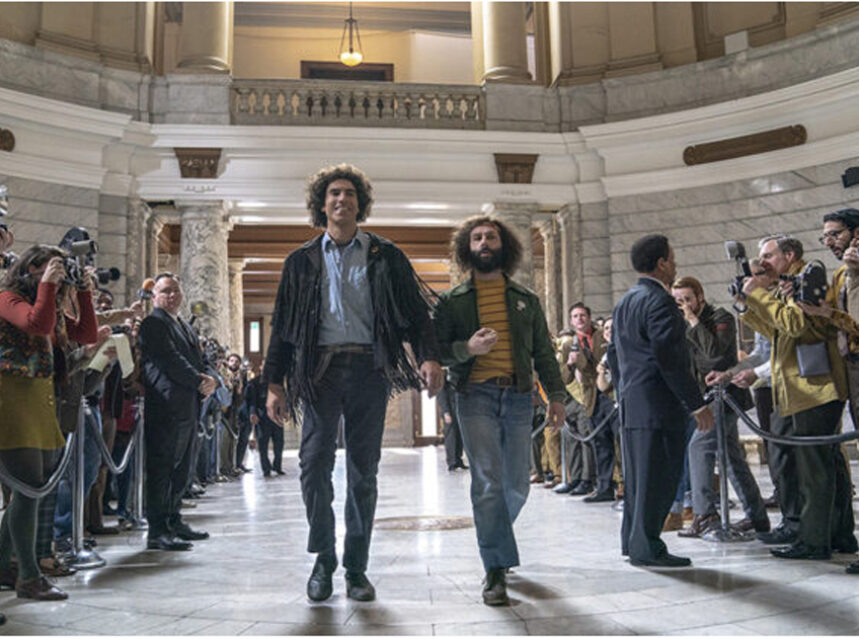 The Trial of the Chicago 7 is one of those interesting films that should have been in theatres last year. Instead, we can find it online. Directed by Aaron Sorkin, the plot is based on seven antiwar activists’ trial after their famous protest during the 1968 Democratic Party National Convention in Chicago. With Richard Nixon in the White House, in 1969 the new Attorney General decided to press charges for federal offences including a conspiracy, against seven activists known for their posture against the Vietnam War and civil rights. The courtroom drama that follows is a good illustration of what manipulation of judicial procedures could do.

The trial took place at an agitated moment in modern US history: the Vietnam War is at its height, more and more young Americans are being sent to fight an unpopular war that increasing number of people are seeing as unjust, and moreover, a war the Americans were destined to lose, at it finally happened.

The seven men accused were not necessarily a homogeneously ideological group. Among them were Abbie Hoffman (Sacha Baron Cohen) and Jerry Rubin (Jeremy Strong) members of the group known as the Yippies (from Youth International Party) which had advocated radical views. Together with Tom Hayden (Eddie Redmayne) a member of the Student for a Democratic Society and David Dellinger (John Carroll Lynch) from a pacifist group. Bobby Seale (Yahya Abdul-Mateen II) from the Black Panther Party, had also been included as part of the conspirators, even though he didn’t even know the other accused. At one point, he would be subjected to humiliating and racist treatment by the judge.

Prosecutor Joseph Gordon-Levitt (Richard Schultz), had been personally picked by the Deputy Attorney General to take the case. Something that he did with some doubts, but went along with it anyway. The defence lawyer was William Kunstler (Mark Rylance) who had to deal with the obvious partiality of Judge Julius Hoffman (Frank Langella) and the sometimes unruly behaviour of his own clients in the courtroom.

The cards were from the beginning set against the defendants.  Even the former Attorney General under Lyndon Johnson, Ramsey Clark (Michael Keaton), would clarify that his own investigation had confirmed that the riots in Chicago had been started by the police, not by the demonstrators. However, Clark would be prevented by the judge, from testifying before the jury.

“The Trial of the Chicago 7” is recommended to those who love a good courtroom drama, but also for those interested in politics and modern American history. Particularly significant in the trial is the background set by that traumatic time of the US intervention in Vietnam and its damage to the Vietnamese population and the American youth who died there for nothing.

Chicago 7 trials review, THE TRIAL OF THE CHICAGO 7 – Miscarriage of justice