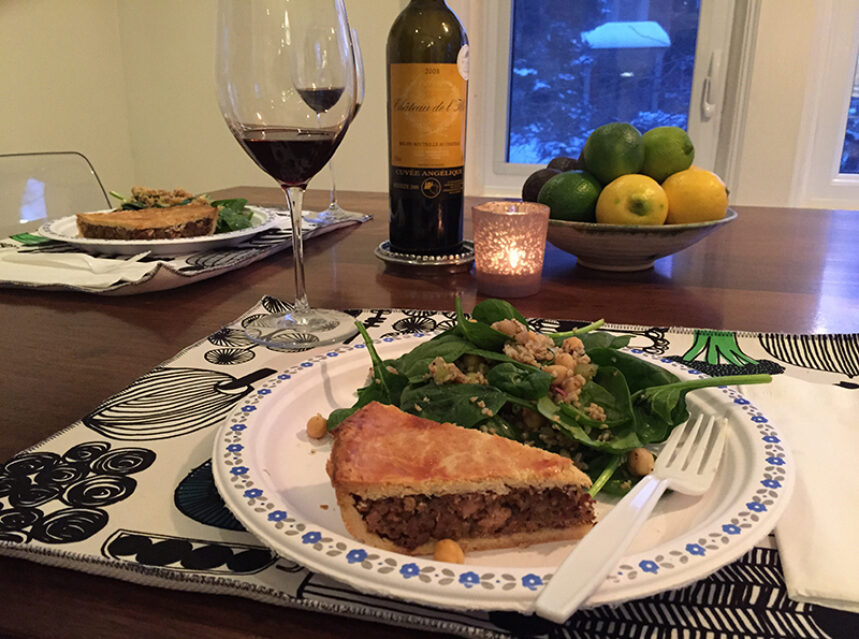 According to food historians (yes, that is a job; yes, you should totally grow up to be one), pies date all the way back to ancient Egypt. But the real pie masterminds—the ones who made it a new art form, realizing all the curiously fun things you can stuff in a giant pot of dough—were the medieval British.

These people lived in a Golden Age—an age when pies could be as big as tables, when they were stuffed with live things, when the whole point of a pie was to provide your dinner and your entertainment all in one go.

Baker’s ovens were just giant, covered fire pits. Any baking container you put inside would melt or explode. So instead of baking in pots and pans, people just baked in massive bowls of thick, hard pastry. These were made of flour, water, and lard, so heavy you could mold it like plasticine dough, and several inches thick to hold over a blazing fire.
Pie crusts were evil—eating one was like swallowing down on a piece of thick gravy-concrete. Foodies of those times just ate the fillings of the pie, and left the crust for the miserables to soak in water or beer and morosely slurp down like cement pudding.

The Renaissance brought refined pastry techniques, ending those brutal cooking days. But today, we celebrate those brilliant medieval cooks by baking a decadent meat pie with traditional, medieval spices. You can bake it in a big pie dish to serve in luscious, meaty slabs, or pop a bunch in a muffin pan to make rather adorable (and oh-so-portable) mini-pies. Bring them to lunch, parties, or just your very lucky dinner table.

Tourtiere can be served with either whites, sparkling or reds, but I prefer light reds to go with them. Try pairing meat pies with light to medium-bodied reds and wines that are fruity like a Beaujolais or a Pinot Noir. Fuller-bodied Côtes du Rhône is a pairs also well. Stay a from pairing any heavy, rich, earthy wine that will beat up the subtle flavors that come from the blend of beef, pork, and veal with the spices in this pie.

Sparkling wine of the week:

One of the French Sparkling Bargains at the LCBO. This Crémant de Limoux comes from the oldest sparkling wine region in the world which continues to produce these amazingly flavoursome, yet affordable sparkling wines. The Sieur d’Arques Aimery Grand Cuvée 1531 is a multiple award winner, picking up no less that 8 gold medals over the past couple of years.

Aimery Sieur d’Arques was founded in 1946 and is one of the largest wine producers in the Languedoc region. The history of this winery begins in 1531, for a century before Dom Pérignon champagne invented a method for the production of sparkling wine, the Benedictine nuns of the Order created the world’s first sparkling wine. For the first time, this wine is mentioned in the 16th century, when the lord of Arc, the owner of the land in Lima, saw this sparkling wine. Languedoc winemakers decided to call their winery Emery Sieur d’Arc in the memory of this historic moment.

Lemon in colour, medium sized and persistent bubbles is apparent in the glass.  Aromatically, the wine brings to mind  apples, brioche with  lemon sorbet and honey. On the palate, the  wine is dry with a good acidity and a elegant mouse.Flavours bring to mind minerals and honey with an excellent length

The Gamay grape makes uncomplicated, easily drinkable, light bodied, light-colored red wines.  It is also capable of producing richly hued, rather tannic, complex and age-worthy wines.  It’s a vinifera chameleon. Many Gamay-based wines are highly drinkable when young, although Gamay is capable of producing age-worthy wines. The Beaujolais Crus such as Chénas  are all good examples of age worthy Gamay.

Cabernet Franc blends pair well with grilled steaks and chops and other meat based dishes. In addition veggies such as  portobello mushrooms and green olives.Lighter versions of 100% Cabernet Franc (look for a lighter pink color) will pair well with chicken, white fish, and quiche. Cabernet Franc likely originated in Basque country – where Northern Spain and Southwestern France meet along the coast of the Bay of Biscay. From there, it spread to Bordeaux and the Loire Valley.

On the nose, pretty aromas of cherry and cassis with a hint of licorice and Supple in the palate. Ample with a luminous presence. Round tannins and quite elegant. Charming wine. 92/100

A pretty Cabernet Franc from the Loire Valley in France. Lovely red fruit aromas with a hint of pepper and violets. Fresh and light with soft tannins. 90/100