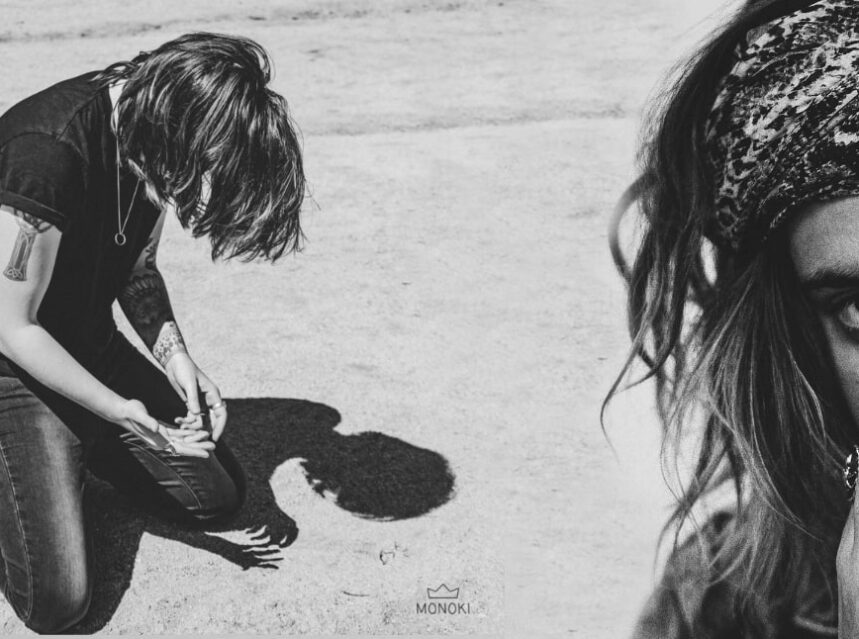 Last month we discovered the lead single Lone Wolf from singer-songwriter Georgi Kay. We were immediately struck with the 25 year old sound and her talent, but we we left wanting so much more song from this amazing artist. Luck was in our favour – Georgi is in production for her debut record – Where I go To Disappear

The independent artist based in LA is rising by the minute. Kay has built a hugely passionate fanbase, with over 70,000 monthly listeners on Spotify, and is regularly garnering tens of thousands of views on her videos. Her debut album is set to release on november 2nd and she’ll already be touring in the regions. Playing at the Toronto Indie Week  – November 6 to 11 th – She is definitely someone to put on your list !

We had the chance to catch the lonely wolf for a close and intimate interview getting a special glimpse into her life and her unique personality just before the big release – Listen To the Single Lone Wolf Now !

Georgi Kay described her single to us as  –  basically about being alone and isolated from distractions and having to really sink into your inner thoughts and feelings, having to face yourself in the mirror so to speak, and accept the vulnerabilities and insecurities you hold within yourself. Overall, it’s a loner’s anthem about turning negativities within the self into something positive.

With a love for creating and looping electronic beats, bass, synths and vocal chops – Georgi Kay is a British-Australian artist based in LA who has received multiple awards for her original work, songwriting, and collaborations over the years. She has won both an ARIA award, multiple APRA awards and received a Grammy nomination for her song “In My Mind” with Swedish House Mafia’s Axwell. Her voice has featured in numerous DJ sets worldwide by some of music’s biggest names and she has collaborated with international EDM/dance artists including Tiesto, Kaskade, Lipless, Matt Nash, Faruk Sabanci and many more.

Gathering inspiration from old sci-fi and horror films, elements of deep house, 80’s inspired synths and a love for the weird and the macabre – audiences around the world have been seduced by Georgi’s hypnotic and energetic live shows, her brooding, husky vocal tones and her honest, symbolic and often ambiguous songwriting – always leaving them wanting more.

Hi Georgi !  Thank you so much for taking the time […]  Where are you and how’s the Album release coming up – are you enjoying your day-to-day experience lately ?

Well, right now I’m actually sitting in my co-producer/mixer Steve Rusch’s studio. We’re working on my debut album ‘Where I Go To Disappear’. I just got back from Australia a couple days ago. I was over there performing at Splendour In The Grass (Australia’s equivalent of Coachella) with my DJ mates CARMADA.We have a song called ‘Lay It Down’. It was our first time playing it live and we performed to over 10,000 people – it was so surreal and crazy!

When I landed back in LA, I played two shows back to back – one at The Moroccan Lounge and another at The Echoplex – severely jetlagged playing both, but well worth it.

Now I’m feeling pretty much back to normal, and I’m sitting here eating an apple listening to Steve tweak some hats and kicks on one of the album songs. Been having a blast with everything lately – I haven’t been this busy in a while so it’s a nice change of pace and a super fun part of the album process to be in.

What makes you happy lately?

Things that make me happy the most are my family, friends, my girlfriend, her Chihuahua, mint tea, video games…sci-fi thrillers, horror films and writing new songs.

What particulary inspired you during the creation of the upcoming album?

‘Where I Go To Disappear’ is basically a body of work inspired by particular experiences I’ve had, either with others or alone with myself – and I think it will give listeners and fans a very in-depth analysis of who I am. It’s extremely self-reflective and personal, with strong themes of loneliness, self- awareness and self-understanding running throughout.

I feel that I reference a lot of my musical inspirations within the album as well. A few years ago I discovered Depeche Mode and whilst living in London, I came across the dark grooving world of deep house. So there are definite synth and bass sounds that I’ve used that pay homage to both genres of music, but are executed in my own style.

Another heavy inspiration for the album is my mad love for horror films and sci-fi thrillers. I’m obsessed with dark and ambient sounds in films like Blade Runner, The Fifth Element, American Horror Story, The Invitation, It Follows… I’m also extremely fascinated and inspired by the visuals in these films.
They’re so vibey and instantly put me in the mood to create a distant otherworldly dreamscape of my own.

What can you tell us about your upcoming tracks?

There are 11 songs on the album, of which 3 have already been released into the world (SCARY PEOPLE, GUILTY PLEASURES, LONE WOLF) followed by the next single TOXINS releasing in September.

When I was a kid I used to write short stories and novellas.
And I’ve only just realized that each song on the album sounds like a chapter title of a book. I guess that was my subconscious working its magic.

It makes sense though, as each song is essentially a storytelling of a particular moment or experience with myself or with another that took place within my life.

Self-reflection is the biggest theme that plays throughout the album.
There are also a few songs that talk about experiences with others, but the majority of the album is very much personal and introspective.

What would you do with your time if you didn’t work in music?

Write sci-fi and horror novels probably. Or become a shark scientist. Do voiceovers for cartoons. Or create sounds and FX audio for video games.

What, in your opinion, is overrated?

What are the fondest musical memories as you were growing up?

Learning how to play guitar and jamming with my dad.

Which artists do you listen most often?

None really. I don’t like to listen to music outside of my own. Not from a selfish perspective but more from a point of view where I don’t want to taint my music with other peoples’ sounds or end up writing songs that sound like carbon copies of something that’s already been created.

I used to live with a friend of mine back in London, and he was a chef. He would cook all day for people and when he got home he would order pizza or a burger and chips. I asked him once why he never cooked for himself at home, because he was a really talented cook and made super tasty meals.

And he said to me, “I’ve been cooking all day. The last thing I want to do when I get off work is cook again.”

Which made total sense, because if you’re doing one thing all day the last thing you want to do when you get home to relax and unwind is that same exact thing.
You want a break from it, and you crave something different.

So that’s how I feel about music outside of my own.

How would you describe your musical process?

I’ll usually start by watching something either really creepy or really futuristic. Sci-fi and horror films are some of my favorite movies to watch, because their visuals are so beautifully haunting and powerful – it really inspires me to create a soundscape that mirrors that environment.

I’ll go through a bunch of synth sounds on my laptop until I find either a bass or lead sound that sets a mood or a tone. Then I’ll add a beat and maybe one other synth element, like an ambient drone or some pitched down vocal chop doused in reverb.

If I can’t close my eyes and imagine the landscape I saw in the film then I know I haven’t created something good enough. Usually that never happens, but when it does – I scrap that idea and start again.

Thoughts on musical genres and label? Do you consider yourself in a specific category?

I don’t think any artist likes being pigeonholed into a specific sound or category. We’re all multi-faceted human beings, and as artists we don’t paint our soundscape with just one color.

When you’re a part of such a competitive industry though, people want to know how to sell you as the next big product. It makes it easier for people with a lack of imagination to better understand the information you’re giving them.

So I guess if I were to sell myself you’d most likely find me down the dark, indie aisle in the electronic-pop section.

Any other artistic sides you particularly enjoy or would like to develop more?

Yes. I like taking black and white photos of my surroundings, like flowers and industrial structures. I’m no photographer though; I just do it for fun.

Drawing has always been something I’ve enjoyed, and I’m relatively good at it. When I was a kid I used to sketch entire comic books filled with my own characters. I remember getting lost for hours drawing those.

I’ve acted once – in Jane Campion’s multiple Emmy award-winning mini TV series ‘Top Of The Lake’. It was a really fun experience, and sort of fell into my lap randomly. I’d love to act more – maybe in the future – but only if it’s for (yep, you guessed it) sci-fi or horror film.