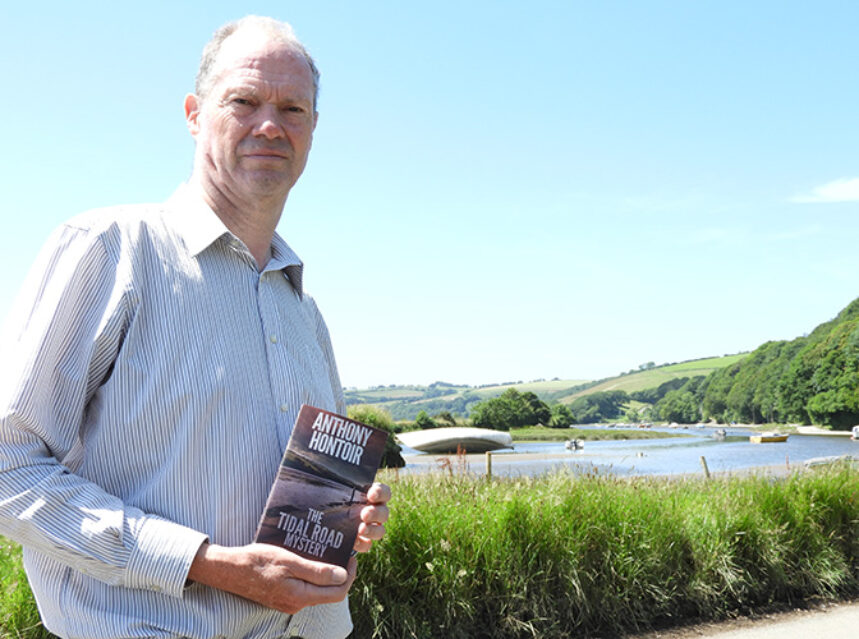 The Tidal Road Mystery – In the modern world of social and technological change, it often feels hard to keep up with what is going on, and I, for one, like the nostalgia of past times. Nowhere is this more apparent than in the Golden Age of Detective Fiction, so well exemplified by the works of Agatha Christie in the 1920s and 1930s, except that in those days it was the modern world. There is something compelling about Hercule Poirot, the small Belgian detective and Miss Marple, his later English counterpart, that makes us want to slip back into decades long gone, years that will never return with social values that are often hard to recognise.

Four years ago, I decided that I would like to write a whodunit novel, almost for the fun of it. After spending my working life in journalism and film production, I made up my mind that I wanted to do something different. My family has always been in the habit of making its annual holiday a week’s stay in Devon, and 2013 was destined to be the same, except that we found a small holiday cottage in the village of Aveton Gifford, where there happens to be a tidal road. My son was, at that time, a keen reader of Agatha Christie murder mysteries and took several books to read during our stay, and I picked up one of these novels myself and became thoroughly engrossed in it. On one day of our stay we visited Greenway, once Agatha Christie’s summer residence overlooking the river Dart and now maintained by the National Trust as a shrine to the Queen of Crime. The atmosphere definitely got to me, and my daily walks along the tidal road gave me the germ of an idea for a whodunit plot – I knew I had to write one myself!

Contemporary detective stories and television series tend to leave me cold. I do not take to them because they are set in familiar surroundings and the characters are usually full of twenty-first century angst. So I came to a deliberate decision to write The Tidal Road Mystery in a way that harked back to past generations whilst being firmly set in the present day. I created my own hybrid world as I chose to see it, and I stuck resolutely to the formula of portraying most of the characters as murder suspects, with an amateur sleuth, Erwin Graham, who does the work of the police for them and reveals the culprit in the denouement at the end, where everyone is gathered together for the unmasking of the villain. It is written in standard up-to-date prose (unusually, perhaps, it switches between first-person and third-person narrative for a perfectly good reason which I shall not divulge here), but without the vulgarities and obscenities that seem to sprinkle much contemporary fiction. The characters are generally well-to-do middle-class people who appear, on the face of it, to be leading busy and prosperous lives until the shrewd detective begins metaphorically to open cupboard doors only to find plenty of skeletons inside. I am, in effect, populating it with people who have been transported from a past era to the present day, broadly from a background with which I am fairly familiar and comfortable. When you pick up The Tidal Road Mystery, you are entering my version of Devon, or wherever the next one might happen to be set, and the characters have attitudes and ways of behaving that may not be wholly familiar to the world of here and now, although I am determined that future books in the series should deal with specific matters of concern to today’s readers, woven carefully into the plot.

The writing of a whodunit inevitably involves twists and turns, with clues and false trails, and although I managed to write most of the book in the space of three months, I got a bit stuck towards the end and laid it up for more than two years, and it was only in the spring of 2016 that it was finally finished, the murderer brought to book and everything resolved. I now faced the dilemma of getting it published. I am already the author of seven woodworking books published the traditional way in the United Kingdom by John Murray and The Crowood Press, but I was also aware that independent book publishing has seriously taken off in the new digital age, and that self-published books far outnumber “properly” published books, as one editor politely put it to me.

So I opted to publish The Tidal Road Mystery in paperback and e-book versions through my own company, Downwood Books, and go it alone, knowing that I would face an enormous uphill struggle to get it noticed. I did not have a large publicity budget, but concentrated instead on a door-to-door leaflet campaign in my own home town, where I am known, and in the areas of South Devon where the book is set. It is hard to get press publicity because local newspapers are inundated these days with self-published books from authors who are popping up all over the place. But at least I have total control over it, and many of the reviews and comments from readers have been satisfying, making it all seem worthwhile.

Thus, The Seagull Bay Mystery is being written at this very moment as number two in the Erwin Graham series, and The Ferryboat Inn Mystery is due to follow that, each with its own distinct flavour of the past mingling cheerfully with the world that we recognise today. And I’ll go on doing it as long as people enjoy reading this slightly unorthodox, in-between world of my own creation.