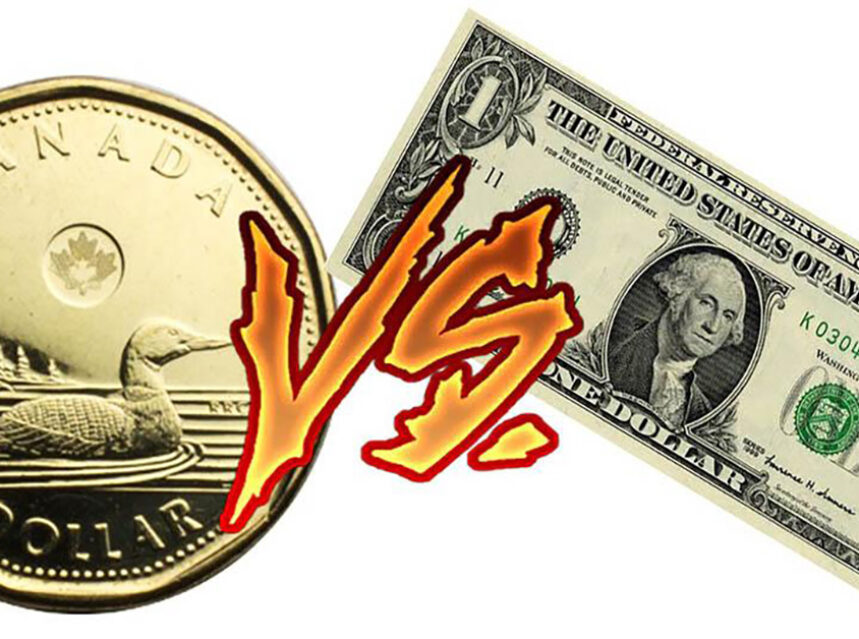 The Canadian economy is strengthening towards the tail end of 2021, but there are still some concerns over inflation. The economy has grown by 5.4% in the third quarter (annualized), which has far outperformed analysts’ expectations of 3% growth.

Some of this growth has been down to the rising employment, which grew by 153,700 in the month of November, Stats Canada reported. This was four times greater than the 37,500 that economists predicted. This led to unemployment falling to 6%, which is close to what it was before the Coronavirus pandemic.

With the new variant Omicron making itself known and being all the more transmissible, there is yet another year of uncertainty that lies ahead. But, how will Canada’s economy be impacted, and will the CAD fare better than the USD and EUR?

Will the CAD be stronger next year?

With high inflation in the US forecasted and Canada’s strengthening economy, Barclay’s have forecasted that USD/CAD will fall to 1.21 in Q3 2022.

This isn’t particularly down to the Canadian Dollar strengthening either, it’s that the USD is expected to have hit its strongest already, and will potentially depreciate gradually over the year.

The USD doesn’t look particularly attractive heading into 2022, with the Fed remaining static with its low-interest rates despite high inflation, and an underwhelming economy. “Monetary policy is going to remain fairly static at the Fed, with the central bank sidelined from a hiking perspective into 2022,” claims Mazen Issa, a strategist at TD Securities.

Dave, expert currency analyst comparison site internationalmoneytransfers.org, says he is expecting a sideways movement from the CAD – though it will depend heavily on the Canadian economy relative to Europe’s and the United States.

Canada has certainly been increasing its employment at a faster rate, with strong GDP growth, and the rate hike cycle that is expected of the BoC has all led to an expectation that the USD will become weaker against the CAD.

The world has fallen into an energy crisis too, yet with Canada being a key oil producer, it’s likely to see the Canadian Dollar further strengthen against the Euro. The outlook for the Euro is further worsened because the European Central Bank is still a long way away from an interest rate hike, which attracts foreign investors, whilst the BoC is.

It’s not just a job market that has fully recovered back to pre-pandemic levels, but its record levels of investment that is giving Canada’s economy a positive outlook heading into 2022. Being a key oil producer and with energy prices remaining firm, Canada holds a strong economic position – particularly if there will be issues regarding Russian energy from Nord Stream 2 that Germany has made Europe more reliant upon. Of course, there could be many economic implications too if conflicts begin between Russia and Ukraine.

Furthermore, the Omicron variant is looking less of a threat to Canada, which has one of the most successful vaccination campaigns in the world. With so few people now unvaccinated, providing the booster jabs are rolled out quickly, they appear to be getting a head start against Omicron, unlike Europe who already has many cases and more unvaccinated people.

The interest rate hike is expected to come by the third quarter of 2022.

Analysts at Scotiabank stated “The Bank of Canada is still likely to initiate its tightening cycle well ahead of its peers and this will drive the CAD higher against the USD, as well as the EUR and JPY, for example. We expect commodity prices to remain relatively well-supported as the global economy re-opens and supply disruptions maintain a premium on certain raw materials. Backwardation in the crude oil curve suggests that elevated crude oil prices are not expected to last but firm prices for commodities generally and improving Canadian terms of trade do provide a further tailwind for the CAD.”

So, whilst there is certainty in the amount of uncertainty we will see from the US and Europe’s major economies, Canada’s economy heading into 2022 looks relatively more certain. This certainty will help further boost business and consumer confidence, which will further increase the already record amounts of investment.

House prices saw a record spike in house prices over the pandemic, with the average home being priced 18% higher in October 2021 compared to October 2020 (data from Canada Real Estate Association). The hot housing market may begin to cool down due to the interest rate rise, but Canada is looking increasingly compelling for expatriates and immigrants.

The main concern for the Canadian economy remains to be inflation. The increasing interest rates will seek to keep any demand-pull inflation under control, but the cost-push inflation caused by global shortages of microprocessors, among many other crises, will likely remain.