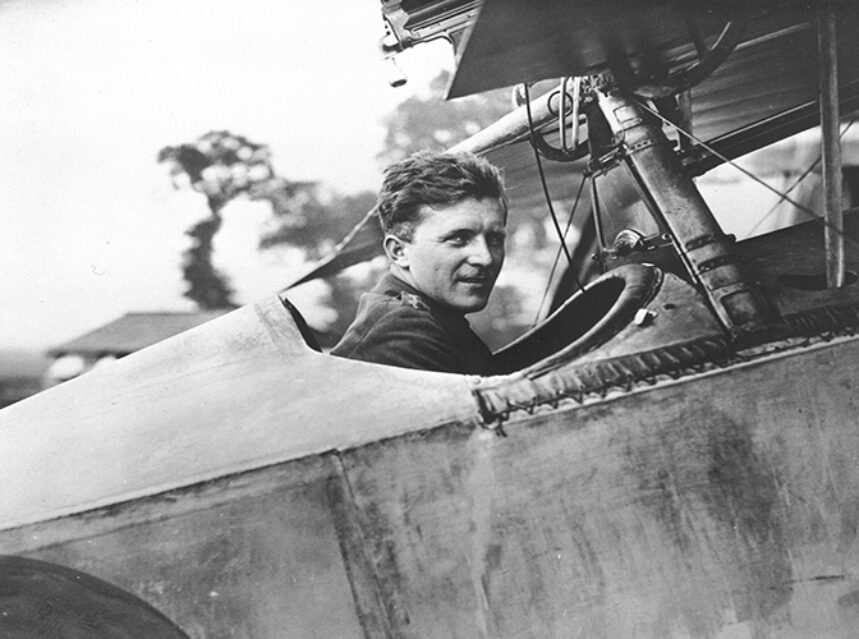 Living Up To A Legend – It’s not always easy to live under the shadow of a famous relative, especially one who has a historic, legendary status attached to them.

Just ask former CBC/CTV/Global News reporter Diana Bishop. Her famous grandfather is the late Billy Bishop, the Canadian World War I air force pilot and flying ace who shot down 72 German planes, and was also best known for his solo raid against a German aerodrome in 1917 that earned him the highly coveted Victoria Cross medal.

To a degree, Diana had some pressure to live up to the Bishop name and the legacy her famous grandfather established exactly a century ago. However, that legacy fell more heavily on the shoulders of her father, Arthur Bishop. A fighter pilot in his own right during World War II with the RCAF, Arthur Bishop happily preserved the heroic legacy of Billy Bishop, from writing numerous books (which included the biography “The Courage of the Early Morning”, which became a national bestseller and is still in print), and reliving that legacy in countless personal appearances and speeches he delivered at military and aviation events.

“He was masterful,” writes Diana. “Playing a part that he had been born into – though it was not one he had selected for himself.”

And now Diana Bishop, who has made a career telling other people’s stories on three television newscasts, tells her own story of what it was like to grow up with the same family name and blood ties with one of Canada’s greatest war heroes in her memoir Living Up To A Legend.

In her book, which effectively doubles as a rather cathartic confessional, Diana recounts the story of both her father and grandfather; how one built an extraordinary, heroic reputation as a result of his actions in the skies over war torn Europe, and how the other tried to echo that reputation nearly 30 years later, but to a rather lesser degree.

She chronicles the life of Billy Bishop as a man who showed exemplary bravery as a fighter pilot who faced increasing danger with every dogfight he engaged in against the nascent German air force. And although he married into a wealthy family (his bride Margaret was a member of the Eaton family, of the department store fame), he didn’t exactly get the chance to enjoy the instant monetary wealth that marrying into a wealthy family can bring. However, up until his untimely death in Florida in 1956, Billy Bishop enjoyed his celebrity, especially serving with the RCAF during World War II, and even as a technical consultant for the 1942 Warner Brothers war flick “Captains of the Clouds”, which starred James Cagney.

As for Bishop’s son – and Diana’s dad – Arthur, life wasn’t easy being the son of a World War One flying ace (he only shot down one German plane during his service with the RCAF). Although he found success as an author and speaker whose main focus was to preserve the legacy of his famous father Billy Bishop, Diana notes that he had very little success in the public relations field and the various marketing projects that he undertook (one rare success happened during the mid-60s, when he promoted a device called the “Play Tape” – which was like the precursor to the Sony Walkman). Usually, he came home from a hard day of work, had his dinner, drank his daily glass of scotch and went to bed. Although he was the life of the party when he and his wife attended parties and social gatherings, Arthur Bishop was at best a distant father to Diana and her siblings.

Also, Diana had that unenviable task of having to live under Billy Bishop’s shadow, first with the commercial success of the play “Billy Bishop Goes to War” (which helped to elevate his already legendary status), and then with the release of the NFB documentary by Paul Cowan called “The Kid Who Couldn’t Miss”, which was basically a scathing critique of Billy Bishop and his wartime record, and alleged that he lied about his war record (especially the number of German planes he shot down). She later responded to those charges after she joined Global with a documentary she put together called “A Hero to Me”, which refuted the allegations that were put forward in Cowan’s documentary about Bishop.

Diana Bishop has written a complete family memoir with Living Up To Legend, and has succeeded tremendously in telling the story of three generations of a family and how they dealt with one member’s enormous contribution to Canadian history. It is written with a great deal of honesty, journalistic integrity, admiration, pain and poignancy (especially the latter part of the book, which deals with Diana’s heartfelt reconciliation with her father towards the end of his life, as the ravages of dementia began to take over is body and mind). If Diana has proven anything with this book, is that having a family member who is historically famous can be a burden, but with a great deal of personal reconciliation and acceptance, it can be something to be proud of, and not ashamed, and face it with as much courage as Billy Bishop did a century ago. As she states at the end of the book:

“I believe that each generation builds on the experiences of the last, so in telling my story, I’ve sought not only to mend and heal my own pain, but perhaps a little of my parents’ and grandparents’, too. This is where I found my own courage. And discovered that there is a hero in all of us.”

Feature Image: Capt William A. Bishop, VC, DSO, MC, in the cockpit of his Nieuport Scout, while with No 60 sqdn. According to the caption on the picture as held by the Imperial War Museum, it was taken on August 6, 1917, and “up to this date he has brought down 37 german aeroplanes.”