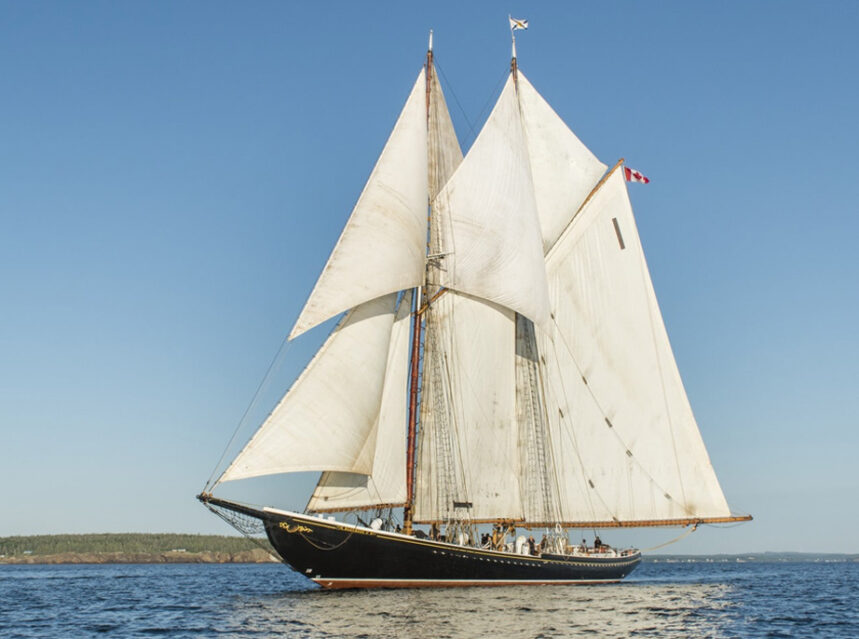 Canada celebrates 100th Anniversary of the Bluenose this June. That’s right! It’s the country’s most famous schooner which appears on the Canadian dime. It was also Canada’s fastest schooner on June 26, Canada Post will issue a commemorative ‘Bluenose’ stamp, while the Canadian Mint will release a special Bluenose coin set.

As you can imagine, there will be plenty of Bluenose 100 events in Nova Scotia where the famed ship was built. Bluenose II has already set out on a Bluenose 100 Sail Past Summer, sailing by and anchoring in ports around Nova Scotia.

Likely by now you are asking, what happened to the original Bluenose?

The original Bluenose was built in Lunenburg in 1921 as a fishing and racing vessel. For two decades Canada’s most famous schooner reigned over the North Atlantic and brought fame to Captain Angus Walters and his crew when it won the renowned International Fisherman’s Cup in 1921! Bluenose crossed the finish line first with almost a perfect record, only ever defeated once in her 17-year racing career.

After a long winning streak, the famous schooner ‘went on tour’, travelling the world under the helm of Captain Walters. Nicknamed the “Queen of the North Atlantic”, Bluenose represented Canada at the Chicago World’s Fair in 1933 and crossed the Atlantic in 1935 so that King George V could see it.

Captain Walters bought the famous ship and worked vigorously at restoring her. He eventually was forced to sell the Bluenose in 1942. It was put back into service as a working ship, carrying cargo in the Caribbean. One fateful day in 1946, the Bluenose hit a coral reef off the coast of Haiti. The crew survived but the Bluenose was severely damaged and sank.

Some thirty years later an exact replica of the iconic schooner was built in the same shipyard as the original—Bluenose II was launched on July 24, 1963. Today the ship is owned by the province of Nova Scotia and sails the Maritimes and beyond to promote tourism, under the helm of Captain Phil Watson. This year he celebrates his 35th year as Captain.

“I made my first trip on the Bluenose when I was 16 years old and I was immediately hooked,” says Captain Watson. “I started at the bottom, cleaning toilets and worked my way to the top. For me, being Captain of Bluenose II is equivalent to winning the Stanley Cup! It is my honour to mentor our young crew. This year we had over 100 applications for crew, 70-80% are from Nova Scotia, with six full time crew and 14 new or returning recruits. The role of Bluenose II is so impactful in acting as an ambassador for Nova Scotia. When we are on tour, an average of 100,000 people cross our deck, and it is our hope and goal that they will follow us back to Nova Scotia. This summer we hope that people can visit our small towns and cities and come out to see the Bluenose II Sail by Tour.”

No, unfortunately Bluenose II is not coming to Toronto this summer as it has several times previously as part of The Tall Ships events. However, Nova Scotia will roll out the red carpet to tourists (again—COVID-19 restrictions permitting) by offering several events and one-of-a-kind experiences and packages.

A visit to Lunenburg is a must, including a visit to the Bluenose Exhibit in the Big Boat Shed where the original Bluenose and Bluenose II were built, along with the ship Bounty used for the movie Mutiny on the Bounty. The Lunenburg Marine Museum Society (LMMS) will host traditional boatbuilders with viewing areas, exhibits and interactive workshops. The main boat building facility was part of the famous Smith & Rhuland Shipyards where more than 270 ships were built, including the most famous Canadian ship of all, the Bluenose.