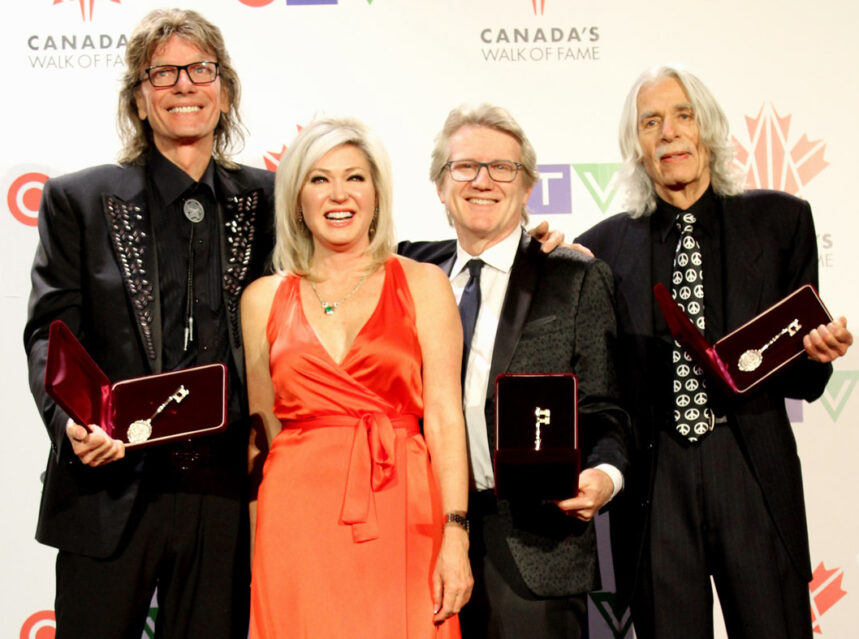 MISSISSAUGA, November 25, 2019: Mississauga Mayor Bonnie Crombie presented Keys to the City to Rik Emmett, Mike Levine and Gil Moore, members of the classic hard rock band Triumph as they were inducted into the 2019 Canada’s Walk of Fame this past weekend.

Triumph formed in Mississauga in 1975 and went on to receive 25 Gold and Platinum Awards in Canada and the United States. In its early days, Triumph established a dedicated creative workspace in central Mississauga at Metalworks Recording Studios. Metalworks grew into Canada’s most celebrated studio garnering nearly 200 gold and platinum awards and winning Recording Studio of the Year Award from Canadian Music Week Conference in Toronto, an unprecedented 17 times.

“Rik, Mike and Gil have played a vital role in putting Mississauga’s music scene on the map. Already members of Mississauga’s ‘Legends Row’ and inductees into the ‘Mississauga Music Walk of Fame’, the band is celebrated and admired by Mississauga residents and beyond,” said Mayor Bonnie Crombie. “From contributing proceeds of a concert to United Way, to donating music and business archives to the University of Toronto Libraries, the band has demonstrated a legacy of giving back. They continue to champion the powerful role that music plays in job creation and growth, and we are proud to honour them with Keys to the City.”

About the Key to the City

The Key to the City of Mississauga is the City’s most prestigious form of recognition. It is reserved for and bestowed upon esteemed community members, former residents and visitors whom the Mayor wishes to honour. It’s a sign of great achievement and distinction and is given to an individual who has positively impacted and changed our City for the better.

While primarily symbolic, the key signifies trust and freedom for the recipient to enter in and out of the city as they wish knowing that Mississauga will always be their home.

The Canadian hard-rock power trio Triumph stands out as a visionary, uniquely influential entity among their fellow brethren. Virtuoso musicianship, soaring melodies and exceptional songs with a positive perspective and outstanding live shows made vocalist / guitarist Rik Emmett, bass guitarist / keyboardist Mike Levine and vocalist / drummer Gil Moore destined for stardom. They defined and epitomized arena rock. Individually, Emmett, Levine, and Moore received countless accolades for their instrumental abilities. Their creative prowess manifested itself in other outlets as well. Levine co-produced some of the band’s early work. Emmett became a cartoonist for Hit Parader magazine. Moore designed Triumph’s phenomenal live show, which consistently evolved over the years and always utilized state-of-the-art lighting, laser and pyrotechnic effects. In fact, Triumph received the influential Performance Magazine’s “Innovators of the Year” award in 1981 for the unique way they changed the arena rock landscape. The first-ever feature documentary about the legendary power trio “Triumph: Lay It on the Line” is currently under development and will cement Triumph’s role in Canadian music history.