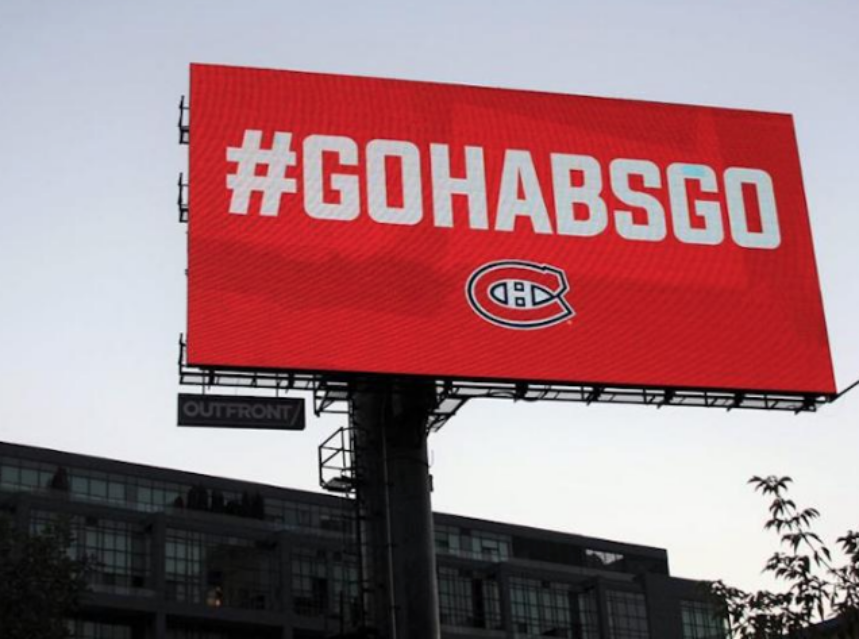 If it isn’t bad enough that both Canadian hub city teams did not make it past the qualifying round, Toronto’s friendly neighbours to the east have advertised themselves on a giant billboard beside the Gardiner Expressway.

The Montreal Canadians posted a photo of the billboard on their Twitter and Instagram accounts along with a one word statement, “Views” and the hashtag #GoHabsGo.

It was originally posted by NHL.com with a simple statement, “Habs put up a billboard in Toronto.”

After eliminating the favoured Pittsburgh Penguins from the post season, the Canadians are currently down 1 – 0 against a high-FLYing young Philadelphia team, and sadly today they were dealt some seriously bad news.

Their head coach Claude Julien has been hospitalized after suffering chest pains in the night following the team’s 2-1 loss to the Flyers on Wednesday night. It was announced by Montreal Canadiens general manager Marc Bergevin during a press conference Thursday afternoon in Toronto. Bergevin said Claude Julien was taken to the hospital in an ambulance after experiencing chest pains overnight and is undergoing tests while he is kept under observation.

The Canadiens also announced that associate coach Kirk Muller will take over as interim head coach.

A report by Sportsnet stated that the chest pains are unrelated to COVID-19. Bergevin said this in French at the Canadiens’ press conference. Bergevin also said if/when Julien gets the all clear the logistics surrounding the pandemic with the bubble and quarantine rules, will mean most likely Muller will be in charge for the remainder of the first round.

“For sure we’ll be missing Claude, said Bergevin. “But our three coaches have experience as head coaches…So we have experienced guys who will work together.”

A native of Blind River, Ont., Julien 60, has been an NHL head coach since 2002 and led the Boston Bruins to the Stanley Cup in 2011. He returned to coach Montreal midway through the 2016-17 season.