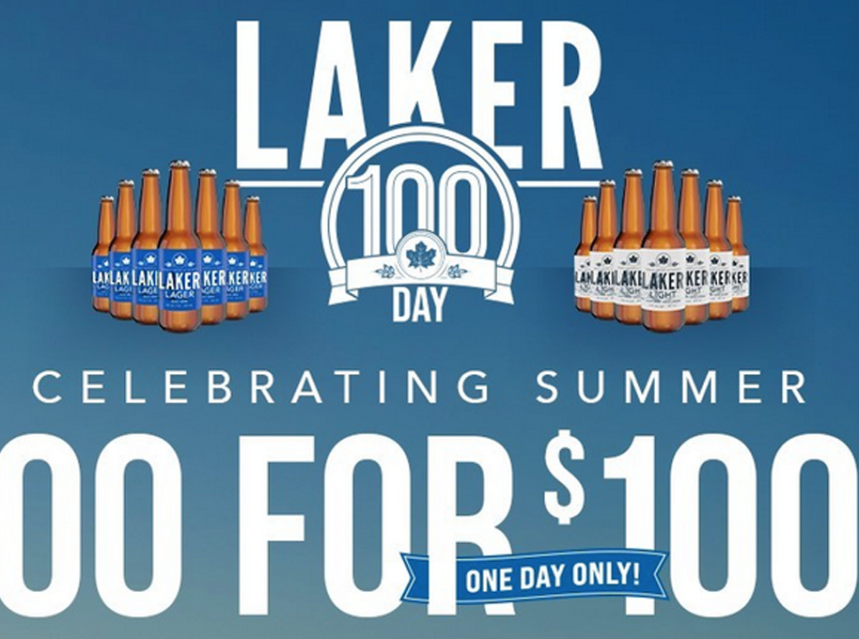 TORONTO, June 14, 2022 – 100 beers for 100 bucks? That’s basically a buck a beer (plus deposit)! Celebrating the kick-off of summer with a 100 beers for a 100 bucks (plus deposit) is a deal that’ll have you saying “cheers” all summer long. That’s right, the kind folks at Laker Beer are giving you everything you need to make it through summer with a One Day Only Celebration of Summer Super Sale. Oh yeah, also in order to take advantage of this amazing summer beer deal, you need to visit the Waterloo Brewing Beer Store on Tuesday July 21, 2022.

It’s a One Day Only Deal

On Tuesday, June 21 you can stock up for summer with the special offer of 100 beers for 100 bucks, plus deposit.

Waterloo will be pouring on the fun from sunup to sundown with free gifts for the first 100 customers, another random 100 prize giveaways throughout the day, hotdogs on the grill, live music and more!

“We wanted to celebrate summer the best way we know how, by sharing our refreshing beer!” said Kim Mannerow, Director of Marketing. “Offering our Monde Selection Gold Quality Award Winning Laker Lager and Laker Light at this great price will help beer fans kick off their summer right.”

“Laker’s crisp and clean taste is the perfect contrast to a hot summer’s day,” said George Croft, President and CEO. “We know the heat is coming and are excited to give Laker lovers the chance to set themselves up for a summer of good weather, good friends, and great brews. We want to honour and celebrate all the support Laker has received by offering our local community a great deal on a great beer.”

This offer includes 100x341ml bottles, and is exclusive to the Waterloo Brewing Beer Store, ONLY located at 400 Bingemans Center Drive, on June 21st.

Come grab your packs to say cheers and mak-er a Laker on the first day of summer!

Waterloo Brewing Ltd. is a regional brewer of award-winning premium quality and value beers and is officially certified under the Global Food Safety Standard, one of the highest and most internationally recognized standards for safe food production. Founded in 1984, Waterloo Brewing was the first craft brewery to start up in Ontario and is credited with pioneering the present-day craft brewing renaissance in Canada. Waterloo Brewing has complemented its Waterloo premium craft beers with the popular Laker brand. In 2011, Waterloo Brewing purchased the Canadian rights to Seagram Coolers and in 2015, secured the exclusive Canadian rights to both LandShark® and Margaritaville®. In addition, Waterloo Brewing utilizes its leading-edge brewing, blending, and packaging capabilities to provide an extensive array of contract manufacturing services in beer, coolers, and ciders. Waterloo Brewing trades on the TSX under the symbol WBR.