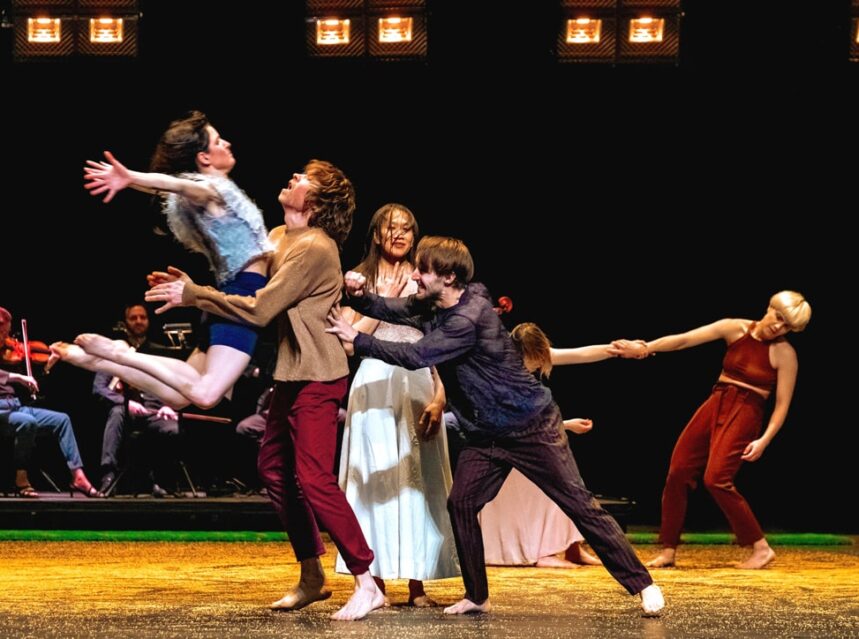 Choreographed by Virginie Brunelle, the work showcases Brunelle’s signature expressiveness and vigorous physicality to portray both the intensity and vulnerability of humanity. The work is further heightened by the Molinari Quartet, whose classical repertoire, performed live, permeates the work and helps animate and amplify
the dancers’ movement, resulting in a seamless fusion of gesture and sound.

“We are thrilled to present Les corps avalés to Toronto audiences for the first time,” says
Nathalie Bonjour, Director, Performing Arts at Harbourfront Centre. “An award-winning
choreographer, Brunelle is renowned for her highly detailed work and great musicality – all of
which is widely on display in this mesmerizing performance.

“She deftly combines rhythm and individual notes with intricate choreography to showcase every nuance of the dancers’ movements,” said Bonjour.

Les corps avalés features seven dancers and four musicians on the same stage, resulting in an
immersive visual and auditory experience. The dancers capture loss, separation, resilience and
hope through a fiery movement vocabulary: sharp throws and challenging suspensions portray
the precariousness of our collective struggle to connect with the world and the drama of
relationships and interactions. Hailed as a work of “great beauty, which touches the heart” (La
Presse), the performance uses intense physicality and athleticism to communicate a
complicated relationship with our physical world. The Molinari Quartet further energizes the
steps and movements of each dancer for a poignant performance of healing and deep
reflection.

Since its inception in 2009, the choreographic company Compagnie Virginie Brunelle has been
under the artistic direction and management of choreographer Virginie Brunelle. Its repertoire
includes award-winning contemporary dance works, which have been presented in Quebec and
on international stages. Brunelle won the 2009 Bourse RIDEAU at the Vue sur la Relève festival
for her work Les cuisses à l’écart du cœur, which led to the founding of her eponymous
company in 2009. In 2011, Brunelle opened La Chapelle’s fall season with Complexe des
genres, which received second prize at Denmark’s prestigious Aarhus International
Choreography Competition. Brunelle’s works have toured Europe and Canada, culminating inan invitation in 2018 to create a production for the Gauthier Dance Theaterhaus Stuttgart
company. Her most recent work, Fables, was presented in May 2022 at the Lugano Danza
Festival in Switzerland, and in Montreal by Danse Danse in November 2022.

As part of their contemporary dance series Torque, Harbourfront Centre will host a Torque Q&A
immediately following the performance on February 25, 2023.

Harbourfront Centre is a leading international centre for contemporary arts, culture and ideas,
and a registered, charitable not-for-profit cultural organization operating a 10-acre campus on
Toronto’s central waterfront. Harbourfront Centre provides year-round programming 52 weeks a
year, seven days a week, supporting a wide range of artists and communities. We inspire
audiences and visitors with a breadth of bold, ambitious and engaging experiences. We
champion contemporary Canadian artists throughout their careers, presenting them alongside
international artists and fostering national and international artistic exchange between
disciplines and cultures.