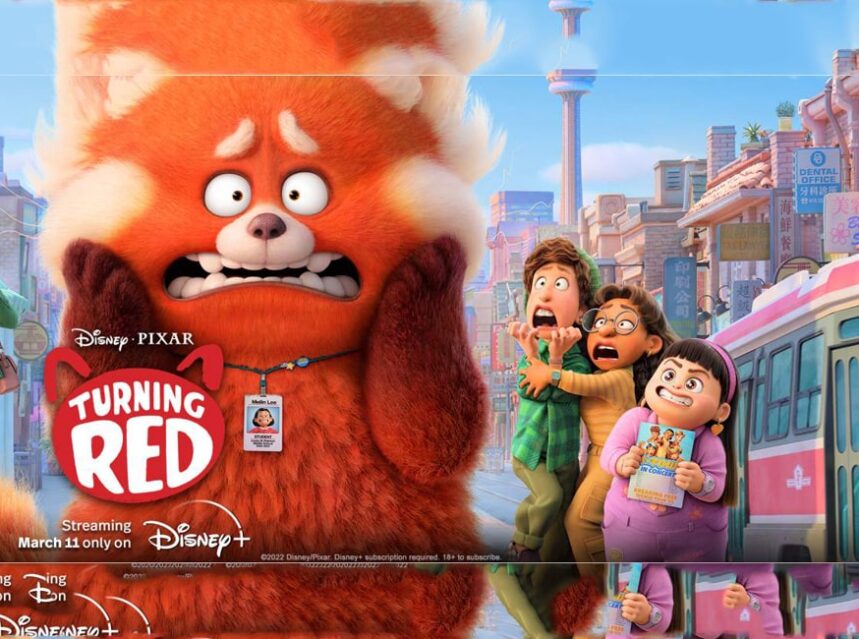 TORONTO, ON, Feb. 28, 2022 – Destination Toronto is celebrating the release of Disney and Pixar’s Turning Red, a coming-of-age story by Toronto-native, and Oscar-award winning director Domee Shi, streaming March 11 only on Disney+. Turning Red, the first solely female-directed Disney and Pixar feature film, tells the story of Meilin Lee (voice of Rosalie Chiang), a confident, dorky teenager, living in Toronto, Canada, torn between staying her mother’s dutiful daughter and the chaos of adolescence. Her protective, if not slightly overbearing mother, Ming (voice of Sandra Oh), is never far from her daughter—an unfortunate reality for the teenager. And as if changes to her interests, relationships, and body weren’t enough, whenever she gets too excited (which is practically ALWAYS), she “poofs” into a giant red panda!

The film, which starts streaming March 11 on Disney+, showcases key landmarks and elements of Toronto. It also highlights the rich array of cultures and people living in the city. Audiences are invited to discover and find inspiration in the city where Meilin Lee lives and experience the creativity and diversity that it fuels.

“Turning Red shines a bright spotlight on Toronto. More than just the setting for the film, the city comes to life as a character full of vibrancy, iconic locations and local flavour,” said Scott Beck, President and CEO of Destination Toronto. “Turning Red is an opportunity for potential travellers of all ages to get a taste of Toronto and fuel their desire for more.”

Destination Toronto is also giving one Canadian family, and one American family the chance to win a trip for four to Toronto to experience the vibrancy and excitement of the city for themselves. The contest* is open from February 28 to March 27, 2022. Visit www.destinationtoronto.com/disney-pixar-turning-red to enter, and learn more.

Toronto continues to be a creative, and innovative hub fostering and uplifting up-and-coming talent and voices from all cultural backgrounds. In recent years, rising Canadian talent has shone a light on the influence that Toronto has had on their work and their creative processes. Notably, Mississauga-born actress and star of Never Have I Ever, Maitreyi Ramakrishnan, lends her voice to the film as one of Meilin’s best friends, Priya.

Growing up in the heart of Chinatown, Shi takes inspiration from her Chinese heritage and the city of Toronto to produce a relatable, heart-warming and creative story. “Turning Red tells the universal theme of the awkward and cringy moments of puberty with a culturally specific paintbrush that is Mei, a Chinese Canadian living in Toronto’s Chinatown”, says Shi. “At the end of the day, we’re all just trying to figure out our furry messes.” And in true Toronto spirit embracing diversity and inclusivity, Shi directs Disney and Pixar’s Turning Red with an all-female leadership team, alongside a female producer, visual-effects supervisor, production designer, and lead voice cast.

“Toronto has so much to offer, and this movie is a true reflection of that. We are a vibrant place that fosters creativity, and embraces diversity and we are so proud to see our city represented on the big screen in Disney and Pixar’s Turning Red,” says Mayor John Tory. “A big congratulations to Domee Shi for the release of her film Turning Red – this film further proves how special Toronto is, and demonstrates that it is the innovative and cultural heart of the country.”

*No Purchase Necessary. For full rules, visit www.destinationtoronto.com/promotion. Closes 11:59 P.M (ET)  2022/03/27. 2 grand prizes available to be won (1 for U.S & 1 for Canada). Each Grand Prize has an ARV of $10,000  (CDN) & consists of a trip for 4 to Toronto, ON incl. round trip airfare; airport transfers via UP Express; 3 nights’  accommodations in 1 room; and $2,500 (CDN). Odds of being selected depend on the total number of eligible entries  received per Country. Must be a legal resident of Canada (excluding QC) or the United States (inc.50 United States  & District of Columbia) who are age of majority in their state/province. STQ Required (Canadians only). Sponsored  by Toronto Convention & Visitors Association. Enter for your chance to win. Void where prohibited.