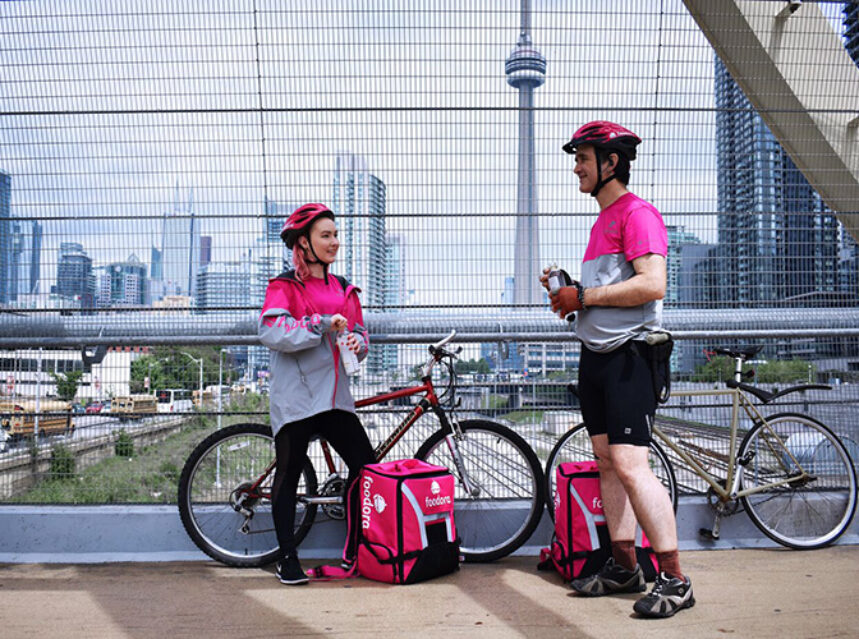 Bike safety – In honour of the nationwide Bike to Work Day on May 29th, and the following month-long bike festival in Toronto, foodora and SmartHalo have come together to create a pilot program to promote bicycle safety.

“Bikes are a part of our DNA,” says foodora Canada’s Managing Director, David Albert. The company is a bicycle food delivery service whose riders can be spotted in Montreal, Toronto, and Vancouver. “Anything we can do support biking initiatives within the cities, we are excited to be a part of. It’s something we can do to help promote bike culture.”

The entire company has adopted bike culture. Aside from the fleet, “About 50 percent of our office bikes to work every day,” says Albert.

Bike safety is obviously high on foodora’s list of priorities. “We launched a trial partnership with SmartHalo,” says Albert. SmartHalo is an urban smart biking device. “We are allowing our riders to test the new technology. It helps them navigate the city in a safer way.” The hands-free device mounts to the handle bars to help bikers navigate. The technology is currently available to the public, but is being tested by foodora on a commercial level.

The second portion of foodora’s bicycle safety initiative for their riders is new gear for the fleet. “All of it has reflective material in it,” says Albert. “This is something else we are doing to make sure our fleet is safe.” The new gear includes a shirt and rain jacket. Both are the same bright pink with reflective silver.

While the initial goals were to create a safer work environment for their delivery fleet, foodora hopes that the public follows their lead. “For the average person it is making sure that whatever you are wearing makes you stand out.” Reflective, bright coloured clothing is best for bikers on the road.

Local bikers can replicate foodora’s bicycle safety standards to promote safety in the bike lanes. “We find it helpful to do everything we can to plan routes beforehand,” Albert says. “When you are navigating through the city, there are many elements that can be dangerous. If you know your route beforehand, it eliminates potential indecisiveness.” Alternatively, local riders can purchase a SmartHalo device for turn-by-turn navigation.

Those who usually choose four wheels over two can still do their part to promote safe bicycling in the city: “It’s important for drivers to be aware of the bike lane,” says Albert.

To expand their bicycle safety initiative to the public, foodora will be sharing Happy Cycling Maps across Canada. In each city that foodora operates in, customers will be able to find Happy Cycling Maps on their blog starting June 11. “The Happy Cycling Maps will highlight safe cycling routes within the city,” Albert says. As a food delivery service, foodora’s cycling maps will include a few food-related tips: “They will also feature some of our suggested restaurants where riders can pick up food along their route.”

Toronto celebrates Bike Month, versus other Canadian cities Bike Week, so riders have more chances to participate. Bike Month runs from May 29th through to June 30th this year. The month kicked off with a Bike to Work Day on Wednesday. The rest of the month includes races, fun rides, festivals, music, and safety presentations all in the name of promoting bike culture in the city.

Cycle Toronto is organizing the month-long bicycle festival, but Bike to Work Day is a nationwide event to promote bike culture. Register for the races, rides, and see event details online.