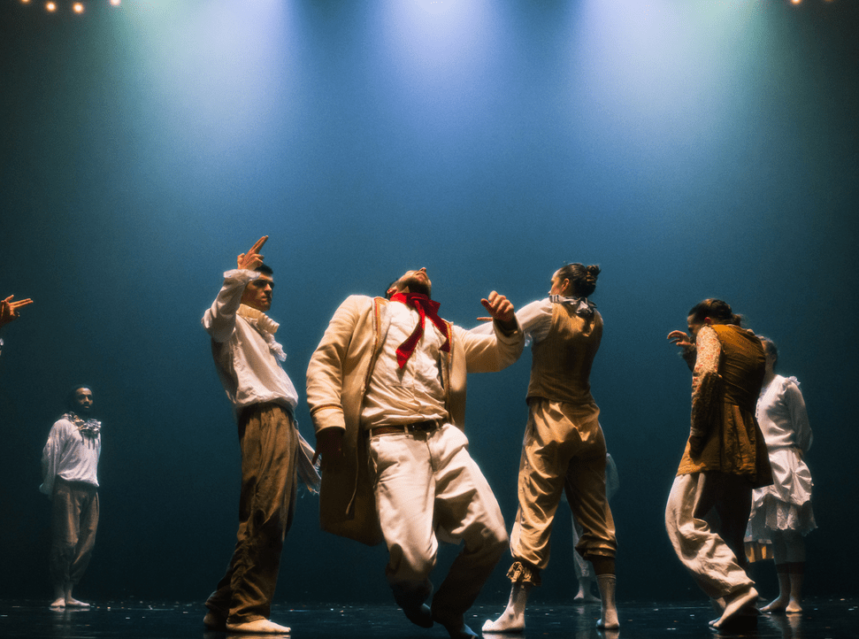 TORONTO, September 19, 2022 – Harbourfront Centre opens its international contemporary dance series, Torque, with the Ontario premiere of Hofesh Shechter Company’s hypnotic and high-energy double bill Double Murder, on stage October 27–29, 2022 at 7:30pm at Fleck Dance Theatre. Created by internationally celebrated choreographer and composer Hofesh Shechter, Double Murder is a thrilling exploration of the chaotic and oppressive forces in our modern times. The performance features two distinctly contrasting works that explore societal schisms and human kinship: Clowns is a sarcastic and playful nod to our ever-growing indifference to violence. At the same time, The Fix presents a tender, fragile antidote to the omnipresent forces of aggression that press on us daily. Set to Shechter’s sweepingly cinematic, percussive score, Double Murder exposes painful truths and deep emotions.

“Renowned for their intense energy and intricate choreography, the Company brings us on an adventure of unbridled discovery, from the urgent movement and pulsing power of Clowns to the gentle lines and connecting moments of The Fix. Audiences are in for an unforgettable experience!”

Opening the evening is Clowns, which premiered in 2016 at Nederlands Dans Theater 1 in The Hague, and was later produced as a 2018 dance film for the BBC. Pulsing with “anarchy and tongue-in-cheek showmanship” (The Stage), Clowns is a macabre comedy of murder and desire, which unleashes a whirlwind of boisterous, dynamic energy, testing how far we are willing to go in the name of entertainment.

As a healing balm to the murderous power of Clowns, Shechter’s newest creation, The Fix – which premiered in London in September 2021 – brings a tender sentimentality to the stage with gentler sounds and meditative choreography. Lauded by The Observer as “heartwarming and beautiful, an antidote to the suffering of the world,” The Fix delivers compassion, shielding us from the white noise and aggression of our daily lives. Violence, tenderness and hope are all laid bare through Shechter’s achingly beautiful and cinematic lens.

Influenced by a collection of sources, including Israeli folk dance, clubbing culture, rock performance and installation art and film, Shechter’s distinctive choreographic style has been described as a “combination of dance-maker and rock star, but with film-director sensibilities” (The Times). The Israeli-born contemporary choreographer and composer has created dozens of works through his eponymous dance company, which launched in 2008. His works have been performed at leading festivals and on major international stages from Rio to Sydney, Shanghai to New York, winning him a passionate worldwide following.

Shechter has also worked as a choreographer in theatre, television and opera, most notably with the Metropolitan Opera, the Royal Opera House, the Paris Opera Ballet and Bartlett Sher’s Fiddler On The Roof on Broadway (2015), for which he was nominated for a Tony Award. In 2018, Shechter was awarded an honorary OBE (Order of the British Empire) for Services to Dance, and he currently serves as Artist-in-Residence of Gauthier Dance in Stuttgart, Germany and as an associate artist of Sadler’s Wells Theatre.

As part of the Torque contemporary dance series, Harbourfront Centre will host a Torque Q&A immediately following the performance on October 28, 2022.