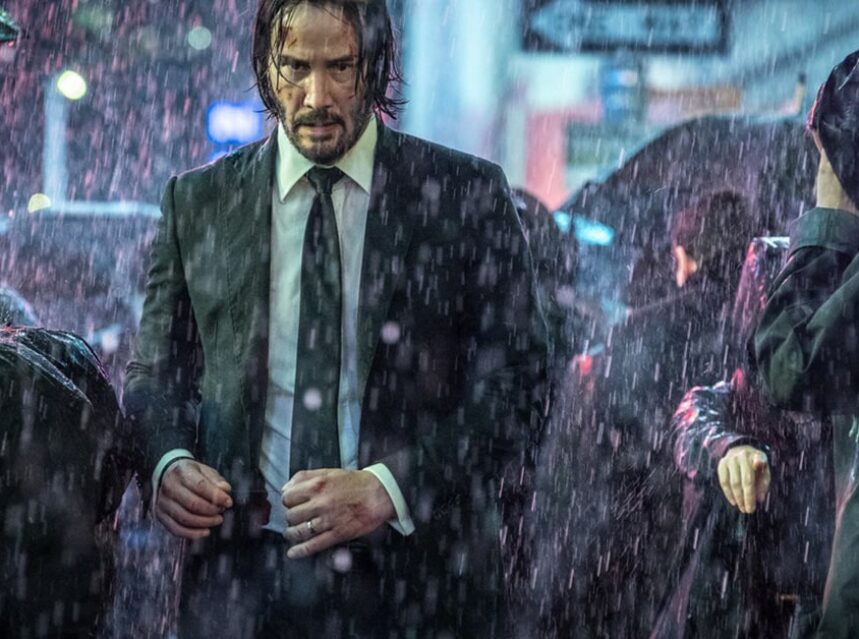 JOHN WICK 3 Parabellum – The successful franchise continues, after chapters 1 and 2, we are now offered a sequel to this story initiated in 2014 by director Chad Stahelski. On this occasion, he also counted on the writing skills of Derek Kolstad, Chris Collins, Marc Abrams, and Shay Hatten. The photography by Dan Laustsen is another element of this film to highlight. If there can be aesthetic value in images depicting some extraordinarily violent scenes, this Danish cinematographer certainly delivers it.

This modern cinema noir story starts at the moment that was left in chapter 2, John Wick (Keanu Reeves) sentenced to death by the High Table, the consortium of crime, after he contravened a rule that prohibits to do business (i.e., to kill anyone) in the premises of the Continental Hotel in New York, a sanctuary for criminals. A 14-million dollars bounty is offered to anyone who kills the now excommunicado John. Winston (Ian McShane) owner of the Continental, had delayed the official announcement of the prize on his head, to give John one hour to elude his potential assassins. John will make good use of the extra time, but it won’t be enough to be safe, and he would be again on the run. Fortunately for him, his killing abilities remain intact and just in the first twenty minutes of the film you would have lost count of the bodies that he has left lifeless.

After seeking the help of The Director (Anjelica Houston) resorting to their shared roots, he would go to Morocco where he would meet an old acquaintance and colleague, Sofia (Halle Berry). She in turn will take him to another assassin, Berrada (Jerome Flynn) who will not cooperate, until he is persuaded –by the usual methods– to give the information allowing John to get to the mysterious elder (Saïd Taghmaoui) seeking the removal of his excommunicado condition. But the troubles for John won’t end there. Indeed he gets deeper into trouble, mainly when The Adjudicator (Asia Kate Dillon) makes an unannounced visit to the Continental with the bad news that would also involve both status of the establishment and that of his owner.

After a few more dozens of dead bodies, some of them killed in a quite gruesome way, we are seeing our hero (or anti-hero) still on the run. Ready for chapter 4, one should say.

“John Wick Chapter 3 Parabellum” is very entertaining, there is violence from beginning to end, but some of the kills, in fact, are so excessive that most people in the audience laughed. Those who like action and feel curious about the ritualistic practices and codes of a sophisticated criminal organization such as the High Table, will undoubtedly enjoy this movie. Of course, if violence is not your cup of tea, this is not the movie for you.