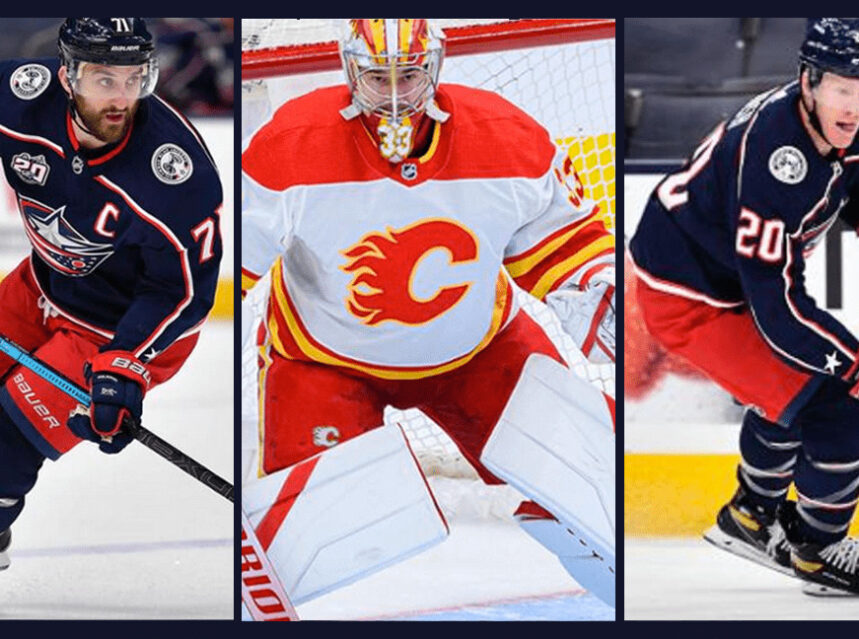 TORONTO, ON., April 11, 2021 — As the Monday afternoon 3 pm ET NHL trade deadline rapidly approaches the Toronto Maple Leafs have been extremely busy on Sunday. The hockey club has acquired Columbus Blue Jackets forward and team captain, Nick Foligno along with forward Stefan Noesen from the San Jose Sharks in a three-way trade that includes the Leafs giving up their 2021 first round draft pick. The Leafs made several other acquisitions including adding forward depth with Riley Nash also from the Blue Jackets, and goaltender David Rittich joining the blue and white from Calgary.

This means the Maple Leafs will have zero cap hit for Nick Foligno.

Foligno, 33, has appeared in 42 games with the Columbus Blue Jackets this season, recording seven goals and nine assists. In 950 career NHL regular season games between Columbus and Ottawa, the Buffalo, N.Y., native has registered 482 points (203 goals, 279 assists), while adding nine goals and 13 assists in 51 career Stanley Cup playoff games. He represented the Blue Jackets at the NHL All-Star Game in 2015 and won both the Mark Messier Leadership Award and King Clancy Trophy in 2016-17.

Nick Foligno is well acquainted with the Leafs and their history as he is the son of former Toronto Maple Leaf Mike Foligno.

Foligno was originally selected by the Ottawa Senators in the first round (28th overall) of the 2006 NHL Draft.

Noesen, 28, has split his 2020-21 season between the San Jose Sharks and San Jose Barracuda (AHL). He has skated in five games with the Sharks this season. In 12 games with the Barracuda, he has recorded two goals and four assists. In 204 career NHL games, the Plano, Texas native has registered 54 points (31 goals, 23 assists), adding a goal in four career Stanley Cup playoff games.

Noesen was originally selected by the Ottawa Senators in the first round (21st overall) of the 2011 NHL Draft.

Nash, 31, has appeared in 37 games with the Columbus Blue Jackets this season and recorded a pair of goals and five assists. In 578 career NHL regular season games between Carolina, Columbus and Boston, he has recorded 172 points (63 goals, 109 assists), while adding two goals and six assists in 32 career Stanley Cup playoff games.

Nash was originally selected by the Edmonton Oilers in the first round (21st overall) of the 2007 NHL Draft.

The Maple Leafs also added goaltending depth by acquiring David Rittich from the Calgary Flames and Veini Vehviläinen, from Columbus.

Vehviläinen, 24, made his NHL debut with the Blue Jackets on March 6. He has also appeared in one game with the Cleveland Monsters (AHL) and 13 games with JYP (Liiga) in 2020-21. He appeared in 33 games with Cleveland in 2019-20, posting a 10-18-5 record with a 2.76 goals-against average and a .901 save percentage as a rookie in the AHL. Prior to coming to North America, Vehviläinen earned the Urpo Ylönen Award as the Liiga’s best goaltender and was named to the Liiga All-Star Team in both the 2017-18 and 2018-19 seasons as a member of Kärpät.

The Toronto Maple Leafs also announced today that they have acquired goaltender David Rittich from the Calgary Flames in exchange for Toronto’s third round selection in the 2022 NHL Draft. As part of the deal, Calgary will retain 50 percent of Rittich’s contract.

Rittich was originally signed by the Flames on June 13, 2016.

The Maple Leafs also announced today that the hockey club has signed forward Alex Steeves to a three year entry-level contract for the 2021-22 season.

Steeves, 21, skated in 29 games for the Notre Dame Fighting Irish (NCAA), recording 32 points (15 goals, 17 assists) to lead Notre Dame and rank 10th among NCAA skaters, while earning a place on the B1G Second All-Star Team. Across three seasons at Notre Dame, Steeves recorded 69 points (33 goals, 36 assists) in 104 games and captured a B1G championship in 2019. Prior to playing at the University of Notre Dame, the Eden Prairie, Minn., native played two seasons with the Dubuque Fighting Saints (USHL) and recorded 75 points (26 goals, 49 assists) in 108 games and won the 2018 USHL Scholar-Athlete Award, earning a place on the USHL All-Academic Team.