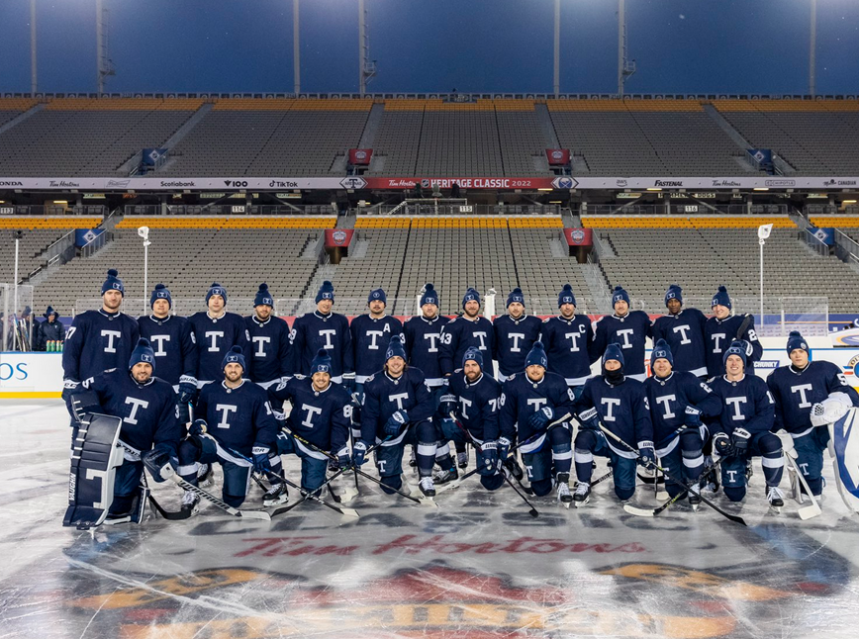 Today Sun Mar 13 at 4:00 pm EST in the great outdoors at Tim Hortons Field, the Toronto Maple Leafs will face off against the host team, Buffalo Sabres in the NHL Heritage Classic in Hamilton, Ontario.

The Sabres recently on March 2 took it to the Leafs 5-1 at Scotiabank Arena and will hope to continue that trend in the classic outdoor setting in front of 24,000 hockey fans. In the previous matchup way back in November, Toronto narrowly defeated the Sabres 5-4 at home.

The Maple Leafs arrived in Hamilton carrying Tim Hortons coffee and dressed as steel workers in honour of the city’s steel manufacturing history and the birthplace of the hugely popular coffee and donut destination, which also has its name on the venue.

The starting goalie for the Maple Leafs will be Petr Mrazek. No. 1 goaltender Jack “Soupy” Campbell is still our with a rib injury. Mrazek struggled in his last outing against the Coyotes, allowing 4 goals on 12 shots before being replaced by newbie backup Erik Kallgren.

Meanwhile between the pipes for the Buffalo Sabres will be veteran Craig Anderson who has 9 wins 8 losses and a .904 save percentage.

Sunday’s NHL Heritage Classic will be played at Tim Hortons Field, home of the Hamilton Tiger-Cats of the Canadian Football League.

It all gets going at 4:00 pm and if you aren’t braving the elements and snow flurries to watch in person, you can catch all the action today on Sportsnet.