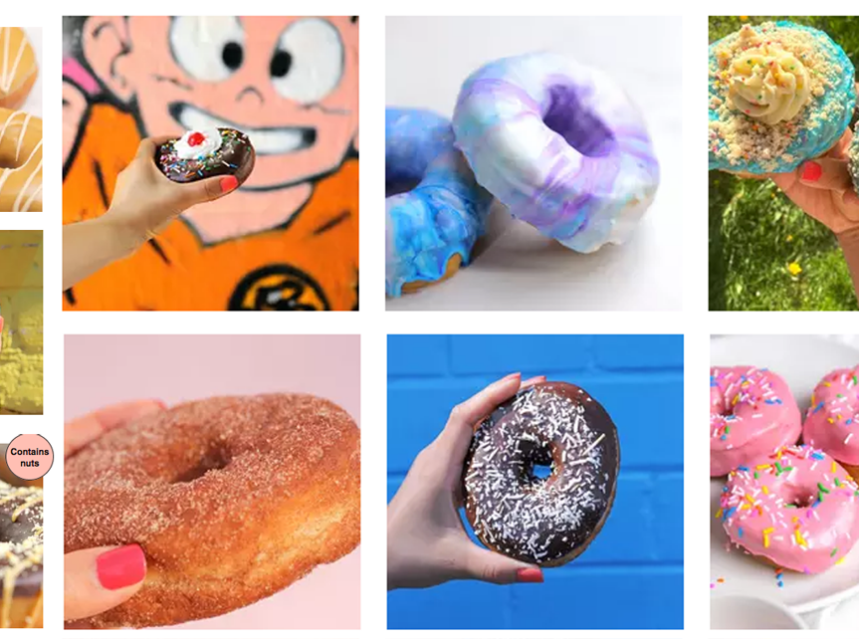 Joughnuts Doughnuts has been creating quite a stir after recently opening their decadent vegan doughnut operation in central Mississauga. In fact, they are so popular that they can’t keep up with the demand, selling out almost every weekend.

The brainchild of four Misisssauga friends, named Jon, Mel, Andrea and Justin, who are vegans and vegetarians, Joughnuts Doughnuts specializes in creating the most tantalizingly decadent, completely plant-based doughnuts in an array of mouth-watering flavours.

Joughnuts is pronounced “jo-nuts” to rhyme with donuts (or the Canadian spelling, “doughnuts”). It is named after Jon, one of their team members who loved making his vegan doughnuts for his family and friends. Well, they were such a hit that his doughnuts became affectionately known as “Joughnuts” for the J in his name.

Jon took up baking and cooking during the COVID pandemic in 2020 and one of his go-to faves was his vegan yeast doughnuts. The doughnuts were a huge hit, which led Jon and his friends launching it as a business venture.

“Our friends and family loved our handcrafted premium doughnuts so much that we wanted to share them with you. Treat the people you love most in your life to hole-some soul food that you can feel good about,” they say.

Mississauga has long been starved for vegan options, especially compared to places like Toronto, and Burlington with their famous vegan eateries and bakeries, and unlike most other GTA doughnut establishments Joughnuts Doughnuts’ entire eye-popping flavour line (as many as 27 in all) is vegan friendly.

Vegan doughnuts are not a new concept as there are a few popular vegan doughnut hotspots in Ontario including, Beechwood Doughnuts in St. Catherine’s, Maverick’s Donuts in Ottawa, and tons of choices in Toronto, while Daddy O Doughnuts, well-established in Mississauga also serves up a few vegan options daily. But for Mississauga to have such a vegan doughnut selection it is proving to be a big deal.

The Joughnuts team plans to have an actual sore location one day but right now they are a small business making doughnuts for pre-order online only. Pick ups of pre-orders are on Saturdays between 12:00-3:00pm.

“Our team is committed to using clean, plant-based ingredients that are kind to animals and downright nourishing to your soul,” their statement says.

All of their doughnuts are proudly vegan containing zero animal products. This means no dairy, no eggs, no honey, or anything else that comes from an animal. The facility where our doughnuts are produced is also completely vegan.

The team of four along with their two pugs Winston and Shelby share their story: “Our story begins on a couch, nestled in a cozy corner of the GTA. On this couch sat four hungry friends and their two pugs, Winston and Shelby. Their eyes glazed over as the credits scrolled across the screen ahead, closing out the 6th consecutive episode of Gilmore Girls. Netflix politely (but rather tauntingly) questioned: “are you still there?”…but Jon, Mel, Justin and Andrea were not there. They were instead deep in some kind of otherworldly dream state, their minds composing the most taste-bud-tingling concoctions.

“Jon dreamt of a doughnut so pillowy soft, that your tongue felt like it had landed upon the sugary clouds of heaven.

“Justin imagined infusions so temptingly innovative, that foodies from across the land would brave the 401 during rush hour to marvel in the flavours, while “Andrea sat contemplating how to make such an a-glazing confectionary using only clean, hole-some ingredients that would make your momma proud.”

Meanwhile, “Mel and her love of animals big and small, wished for ingredients that were completely vegan and free from harm. “No animals should ever be harmed to create delicious food!”, she thought.

There is also a charitable angle to Joughnuts Doughnuts through their “Share the Dough” program. A program designed for giving back to the community by donating a portion of their net sales to organizations to help animals and humans alike. To #sharethedough, Joughnuts Doughnuts donates to two different charities each month- one supporting animal causes and one supporting people in need.

This month, when you enjoy a box of Joughnuts Doughnuts, you are also helping to support the following charities and organizations: GLO Farm Sanctuary and Egale Canada.

Other #sharethedough charities have included:

But back to their delish doughnuts. Pre-orders are only for the six (6) assorted doughnut flavours offered that week in their Tasters Box. The Last day to place an order is Friday at 5:00pm. The doughnuts are made fresh on Saturday morning for pick up between 12:00 – 3:00pm that Saturday at 5915 Atlantic Dr. Unit #1 in Mississauga.

​Currently, you cannot order flavours that are not on the Tasters Box menu for the week. This week June 5 the flavours included:

Joughnuts Doughnuts take pre-orders for their Tasters Box change each week so there is always something different to try!