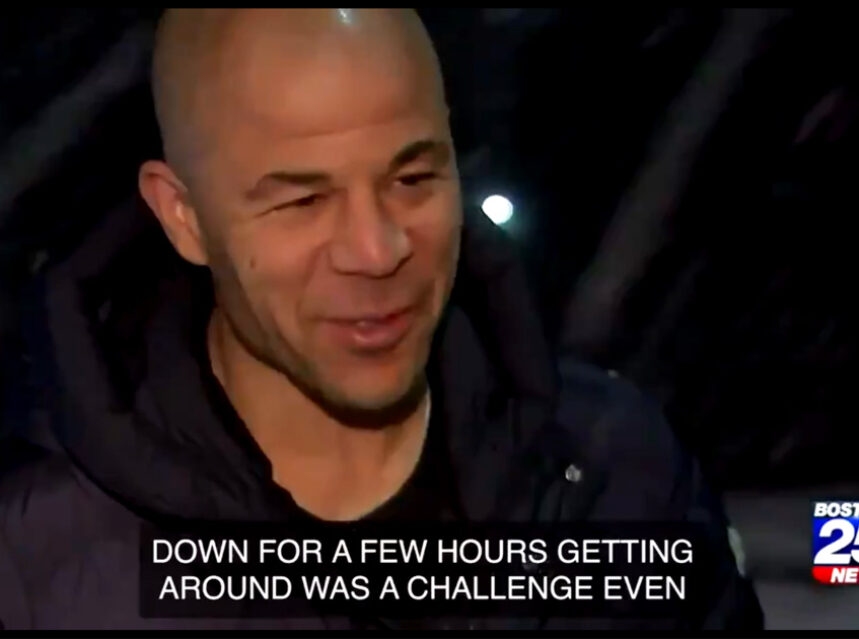 NHL Hall of Famer Jarome Iginla was interviewed by Boston 25 News about driving in heavy snow, and the reporter and crew did not realise he was Jarome Iginla.

His short interview consisted of a few comments offering advice about driving in snow. Not surprisingly it comes off like a Hockey Night in Canada post game interview, something Iginla grew accustomed to over his storied 20-year NHL career mostly with the Calgary Flames.

The reporter’s lead in said “Visibility was poor on the highways as heavy snow came down for a few hours. Getting around was a challenge even for those who are used to this.”

Then the camera cuts to NHL legend Jarome Iginla who says:

“Pretty tough, we’re from Canada so it’s not too crazy, I mean we’ve got some winter tires and used to this growing up, so it’s not great I’ll tell you, you get some tough stretches but if you don’t go fast, it’s doable.”

“I like the winter but not necessarily this. This might be too much,” Iginla told the news crew.

He appeared to be at a rest stop on the highway.

After a long career as captain of the Calgary Flames and also playing for the Penguins, Bruins, Avalanche and Kings before retiring with the Flames in 2018, Jarome Iginla eventually settled with his family in Brookline, MA., in the Boston area. He had played for the Bruins in the 2013-14 season, and now he enjoys coaching his two boys, 12 and 10, and 14-year-old daughter.

He told The Athletic that he chose the Boston area to settle not only because he really enjoyed playing there, but also: “It’s a nice city to live, obviously. There are a lot of great things – the schools, the hockey and the proximity with the good competition. [After playing in Boston] we went to Denver for three years and we really enjoyed it …But, the hockey for the kids, it’s all travel there in Colorado. Without exaggerating, they probably had a minimum of five flights a year each, maybe six, and they were gone weekends. Those are usually Thursday to late-Sunday trips. Since I was done [playing] I didn’t want to travel that much because I wouldn’t be able to see them all.”

While with the Bruins Iginla had a decent season finishing with 61 points (30 goals, 31 assists) and had an NHL career-high plus-34 rating, contributing to the Bruins first place finish in the Atlantic Division and winning the Presidents’ Trophy. That year they lost to the Montreal Canadiens in the Eastern Conference Second Round. Iginla chipped in with five goals and two assists in 12 games in what was to be his last trip to the playoffs. Before that Iginla played for Pittsburgh on their 2013 playoff run before being eliminated in the conference final by the Bruins.

Following his season in Boston, Iginla played two seasons with Colorado becoming the 19th player in NHL history to reach 600 goals. Then he was traded to the L.A. Kings in 2017 before retiring as a member of the Calgary Flames in 2018.

The 41-year-old forward, longtime Flames captain scored 625 goals in 20 NHL seasons and was inducted into the Hockey Hall of Fame in 2020.