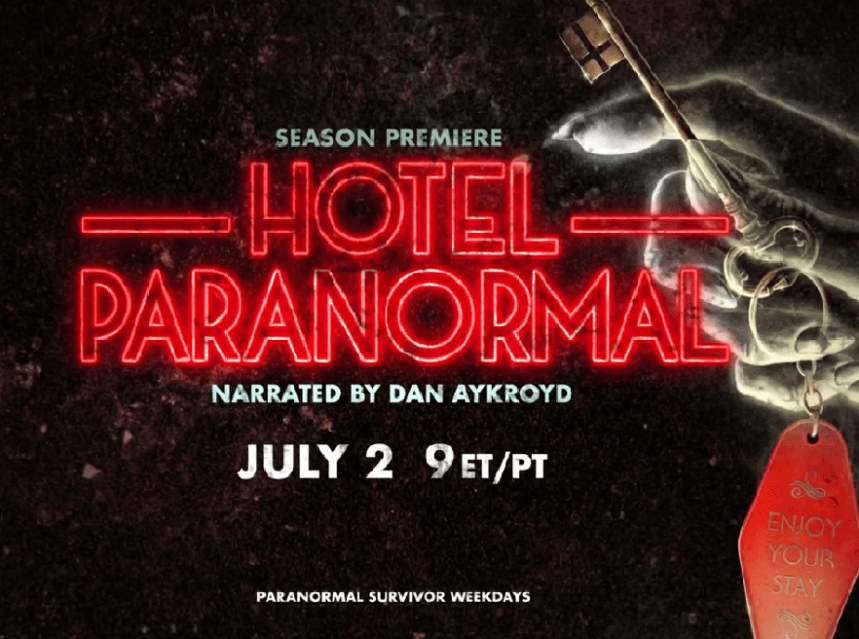 A national survey, commissioned by Canada’s leading paranormal television broadcaster T+E and conducted by market research firm Ipsos, reveals nearly half of Canadians (46%) believe in ghosts. Of the 1,000 Canadians polled, one in 10 have checked in to a haunted hotel, motel, inn or rental, with nearly half of guests (45%) claiming they had a spooky paranormal experience during their stay. A further two in 10 (21%) said they would “absolutely” want to stay in a haunted hotel.

The survey was commissioned by T+E to celebrate the second installment of the broadcaster’s #1-rated, original series Hotel Paranormal, narrated by Emmy® Award-winning and Oscar®-nominated actor Dan Aykroyd, who is a firm believer in the paranormal. Season 2 ramps up the scares with more bone-chilling real-life stories of otherworldly run-ins told from stays at grand hotels, highway motels and short-term rentals around the world. The world broadcast premiere of Hotel Paranormal, Season 2 airs Friday, July 2 at 9 p.m. ET/PT, exclusively on T+E.

“What makes Hotel Paranormal so unnerving and entertaining is that these are all documented real-life encounters – and the new season has even more scary stories to share than the first,” says Dan Aykroyd. “These eyewitnesses are very believable; you can tell they really went through something that still haunts them to this day.”

Saloon Media’s Sarah Zammit, Series Producer for Hotel Paranormal, Season 2, found the survey results to be in line with the eyewitness interviews and research they conducted during production. In fact, several members of the production crew reported experiencing paranormal events during filming on location in an Ontario hotel, one reputed to be haunted – from an old bullet casting appearing in a room during the night, mysterious words appearing in a mirror and a shadow figure terrifying one crew member out of their sleep.

Audiences who watch the Hotel Paranormal, Season 2 premiere on Friday, July 2 at 9 p.m. ET/PT, will witness everyday people reveal their terrifying encounters with the presence of ghosts, supernatural beings and even demons, as they share their remarkable stories, and in some cases, reveal the evidence they captured on camera.

Many Canadians have actively taken matters into their own hands to contact spirits from beyond the grave. At some point, nearly half (45%) have either used a Ouija board (32%), consulted a psychic (20%) or a medium (11%), or participated in a séance (4%). Among those who believe in ghosts, six in ten (60%) have tried at least one of these methods of connecting with the other side, with Ouija boards (40%) and psychics (30%) being the most popular.

“The fact that one in 10 Canadians have stayed in a haunted hotel and nearly half of Canadians have felt the presence of a ghost is very exciting, as it shows you have a good chance of witnessing something spooky. Hotel walls hold so many stories, and not all of them are good, so they’re the perfect place for an unrested soul to dwell,” says Paranormal Expert and World-Renowned Psychic Medium, Deborah Louise Levin.

There is no shortage of famous ghosts and when it comes to hotels, a number of guest rooms around the world may be haunted by the spirits of celebrities who have passed away within their walls. One in four Canadians said they would want to “meet” the ghost of beloved Canadian actor and comedian John Candy if given the chance. Rock legends Jimi Hendrix (12%) and Janis Joplin (10%) are next in line, followed by iconic fashion designer Coco Chanel (7%) and former British Prime Minister Margaret Thatcher (6%).

Other articles from totimes.ca –mtltimes.ca – otttimes.ca