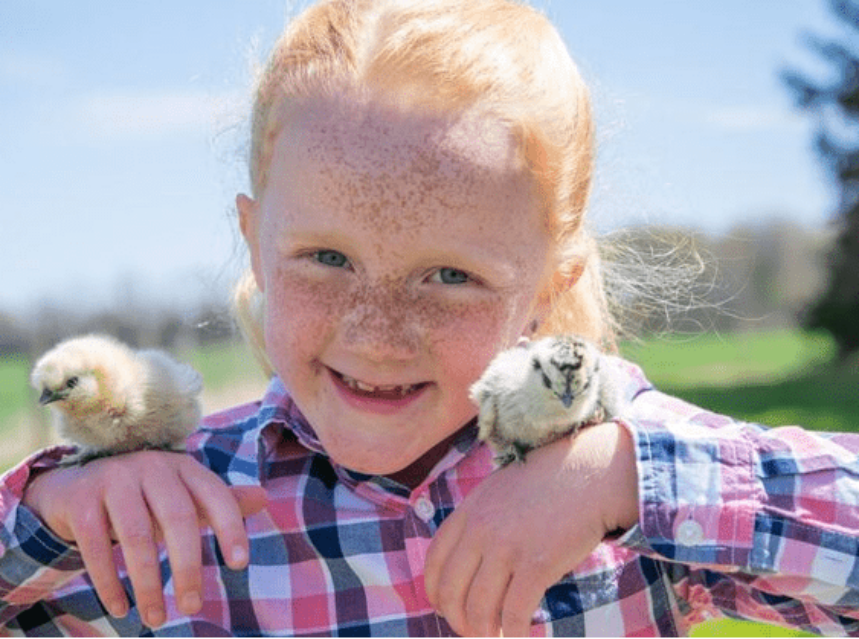 Meet Gabby. She is a six-year-old girl who lives on her family farm near Guelph, Ontario. At such an early age, Gabby is already a farm girl at heart. She is passionate about everything to do with her life and world down on the farm, from her chores, to working with the many farm tools and implements that are at her disposal, to interacting with the many animals that inhabit her family farm (including horses, chickens, cows, sheep, lambs and cats). In fact, Gabby loves farm life so much, she is now about to share that enthusiasm and passion with pre-school viewers on her new TV series “Gabby’s Farm”, which airs on TVOKids and the TVOKids YouTube channel starting May 17.

“I never dreamed that I would have my own TV show. My mom sent a couple of video applications, and I ended up auditioning with 2000 other kids. And apparently, they picked me,” said Gabby during a recent Zoom call direct from her family farm.

“Gabby’s Farm” is a series geared towards young viewers between the ages of three and five, in which Gabby acts their guide to the world of farming and agriculture, and show them, through her passion for farm life, how they can pique their curiosity about nature, how and where food grows, and caring for animals, amongst other related topics. As well, she shows what her everyday life is like on the farm, as she introduces them to her family, friends and neighbours, and some of the fun activities she does regularly on the farm, such as milking cows, riding tractors and even exploring beehives.

However, the series’ focus is not just restricted to Gabby’s family farm. “I travel a lot and visit other peoples’ farms in the area,” she said. “I have visited dairy farms, goat farms, pig farms, sheep farms and apple orchards, so they could learn a lot of things like what are cows like, or where food comes from.”

Chloe Gray, the series’ producer and director, knew from the offset that Gabby was a natural to host this show. “She’s a real farm kid, whom you could envision her climbing a fence, then jump into a flock of sheep and run around with them. Gabby also took a shining to the job of hosting a TV show. She’s a natural who knows she can be a star,” she said.

“She is a real hands-on person, especially when she shows the skills she has learned so far doing her responsibilities and chores on the farm,” she said. “And with Gabby, kids do see themselves being represented on the screen, and through her experiences, they can learn a whole lot of new life lessons, such as how to play and engage with animals.”

Ms. Gray adds that “Gabby’s Farm” also offers a new dimension in learning some new educational skills. “As well as the farming skills, seasons, animals and responsibilities that are displayed on the show, we also have a math element (the short form series “Count with Gabby”), where Gabby counts different items around the farm, or compares sizes, etc. So there are lots of great learning outcomes for pre-schoolers.”

Although young Gabby is a farm girl at heart, she has appreciation of some of the joys of city life on her mind. When Gabby found out I live Montreal, she had this special request for me: “Can you send me some Montreal bagels? Can I have five boxes filled with them?”

“Gabby’s Farm” debuts on TVOKids and its YouTube channel starting Monday, May 17. Also, it has been recently announced that the show has just been renewed for a second season. For more information, or to watch episodes of the series, go to www.youtube.com/tvokidspreschool or www.facebook.com/tvokids .