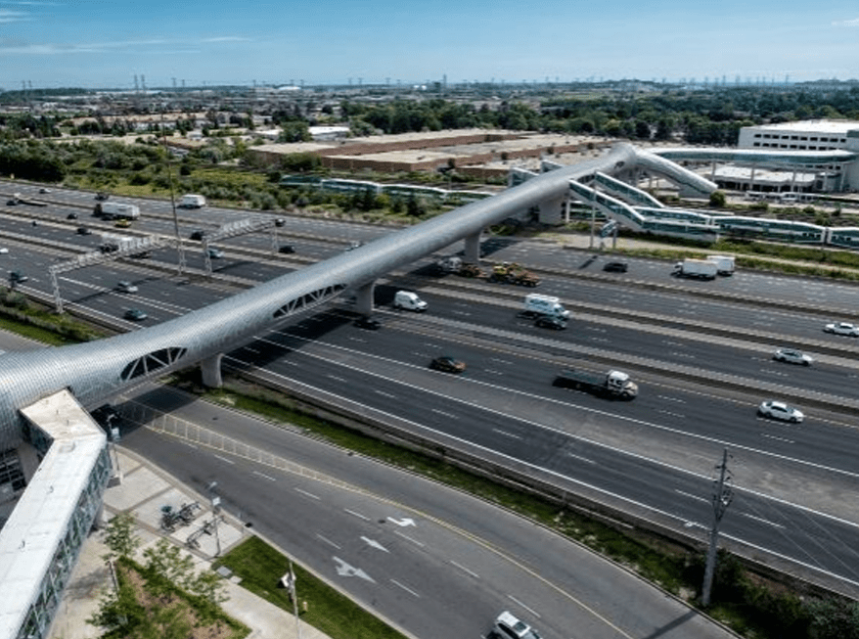 Guinness now says officially that “the longest enclosed pedestrian bridge is 250 metres and was achieved by Metrolinx (Canada), in City of Pickering, Ontario, Canada, on September 2018.”

“It’s no small feat to jump over 14 lanes of traffic and another six rail tracks. And that boast has earned the Pickering Pedestrian Bridge – the remarkable piece of engineering over Highway 401- an equally iconic award and place in the record books,” reads a Metrolinx news release.

The Pickering Pedestrian Bridge, spans 14 lanes of highway 401, six live rail tracks, and a two-lane municipal roadway is located approximately 45 minutes east of Toronto, in the City of Pickering, Ontario, Canada It was officially completed back in September 2018 after nearly a decade of planning, design, and construction.

Here’s a video from Metrolinx that illustrates the measurement process.

The bridge, located in Durham Region, showcases regional and local infrastructure in that it connects Pickering GO Station on the south to both Durham’s largest shopping mall, and local college, as well as regional bus service which are all located on the north side.

At night the organically shaped bridge takes on a life of its own illuminated approximately 300 LED lights glowing in rotating shades of lilac, purple, blue and teal.. The bridge is no stranger to receiving accolades as it received the City of Pickering’s 2019 Urban Design Award and Metrolinx also received the 2019 Engineering News Record (ENR) Global Best Projects Award in the tunnel/bridge category.