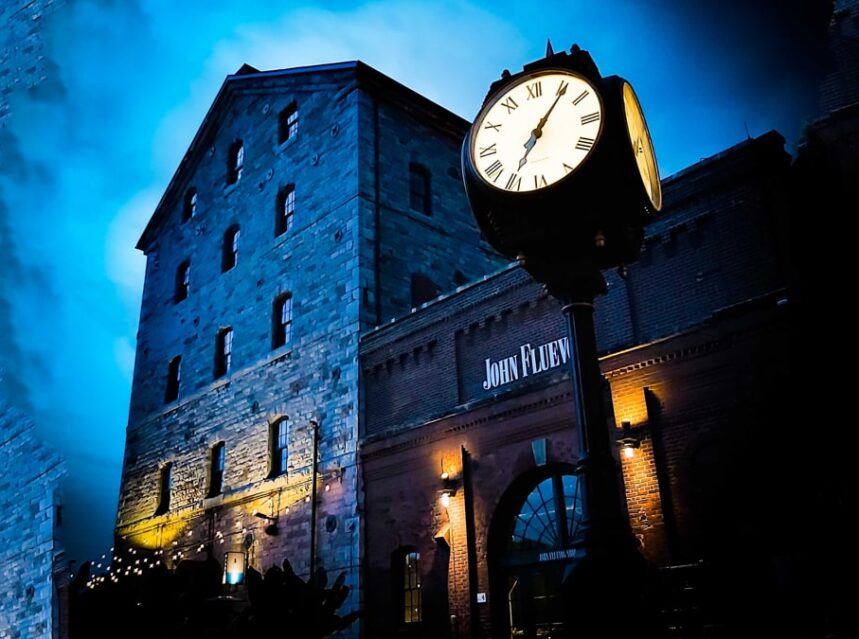 Ghouls, goblins and things that go bump in the night. These are just a few of the things you may experience on a Haunted Walk of Toronto, that includes a visit to the popular Toronto Distillery District (aptly named Spirits of the Distillery District Ghost Tour – but I don’t think they are talking about the alcoholic type of spirits). Hear spine-tingling ghost stories on haunted walks of Toronto like the Ghosts of Black Creek Pioneer Village, Campus Secrets and Spectres-University of Toronto Ghost Tour, and the Original Haunted Walk of Toronto.

“You will never look at the city the same again!” promises the website!

“We have been operating the haunted walks in Toronto for nine years and are very focused on telling ghost stories that give the background as to why a building may be haunted and who may have lived or worked there and what happened there based on historical facts,” says Rowena Brook, Business Operations Director, Haunted Walks Inc. “The walk is fully outdoors, but we do go into a few buildings on certain walks. Our guides stop in front of the various sites to talk about spooky encounters at some of Toronto’s most notorious haunted places.”

Since starting its Toronto tours, The Haunted Walk has been running a tour of Toronto’s Distillery District, adding three other tours over the years. “The Distillery District dates to the 1830s when James Worts immigrated from England and bought a plot of land and opened a flour mill. His brother-in-law William Gooderham later opened a distillery. Unfortunately James Worts never lived to see the success of the distillery—his wife and child died during childbirth and not long after, the body of Worts was found in the bottom of a well onsite. There have been many reports from merchants and visitors in the Distillery District seeing a shadowy figure of a man. Staff at Brick Street Bakery reported seeing a man in old-fashioned clothing peering in their shop window, while others have said they have seen a glimpse of a man watching them from behind but when they turn around, no one is there. It’s as if James Worts continues to watch over the Distillery District. To this day we hear stories of people seeing a shadowy presence. There are too many of these stories and sightings for it to be just a coincidence.”

Brook refers to Black Creek Pioneer Village as “one of the most notorious haunted places in the GTA”. She explains: “We started doing tours in 2016, and I am not one who spooks easily, but this has to be the spookiest place I’ve ever been.”

The village seems to be a hot bed of paranormal activity. The village has many original buildings built by European settlers and other historic buildings which have been moved here. Two of the buildings which are believed to be haunted are the Manse and Burwick House. The Manse seems to have an angry male presence on the upper level.

“There have been stories of books being pulled off the shelf in the office and our guides have heard loud banging coming from upstairs. One family said that during their daytime visit, their daughter refused to go into the house and said, ‘there’s a mean, angry old man inside’. During one tour, the guide was telling the story inside, and a couple were holding hands, listening to the story, and when suddenly the woman fell to the ground. She said she had felt a cold force that was so strong it forced their hands apart and knocked her to the ground.”

Burwick House is known as one of the “most haunted places” at Black Creek Pioneer Village, according to Brook. “Many staff have experienced strange occurrences including one guide who entered the house and saw a woman sitting on the couch. They made eye contact and the guide was surprised and looked away. When she looked back within seconds, the woman was gone. Others have heard a cradle rocking on its own on the second level or banging against a wall but when they go up, the cradle is still. Children have said they have felt someone touch them on the arm and one child said someone gently touched their cheek. We feel the spirit may be a mother who perhaps lost a child and is trying to connect with children on the tour.”

The Haunted Walk team have experienced so much activity at the site over the years that the website warns: “Not recommended for children or easily frightened adults!”

The tours are best for children ages 10 and up, says Brook. Each tour is conducted by a guide dressed in a black hooded cloak and carrying an old-fashioned lantern (with a modern LED bulb). The trained guides are given a carefully researched script which highlights the history of the different buildings, people who frequented them and other known facts. Each guide brings their own flair and personality to the stories.

Haunted Walks Inc. was founded in 1995 in Kingston by CEO Glen Shackleton. He was studying at Queen’s University when he travelled to York, England and happened to sign up for a ghost tour. Shackleton was so intrigued with the experience, he returned to Kingston and started Haunted Walks Inc. which has now grown to include tours in Ottawa and Toronto. Brook was a drama student at Queen’s University when she joined as a guide and later moved to Toronto to help establish the location there. Tours run nightly in Toronto’s Distillery District and the Black Creek Pioneer Ghost Tour is currently offered on weekends. Other tour dates and availability are listed on the company website, hauntedwalk.com.

“People go on ghost tours for a number of reasons—curiosity, to learn a bit about history of certain buildings, while other people enjoy being frightened, similar to watching a scary movie or telling ghost stories around a campfire,” says Brook. “This is like ghost storytelling based on historical facts. There’s nothing scarier than the truth!” https://hauntedwalk.com