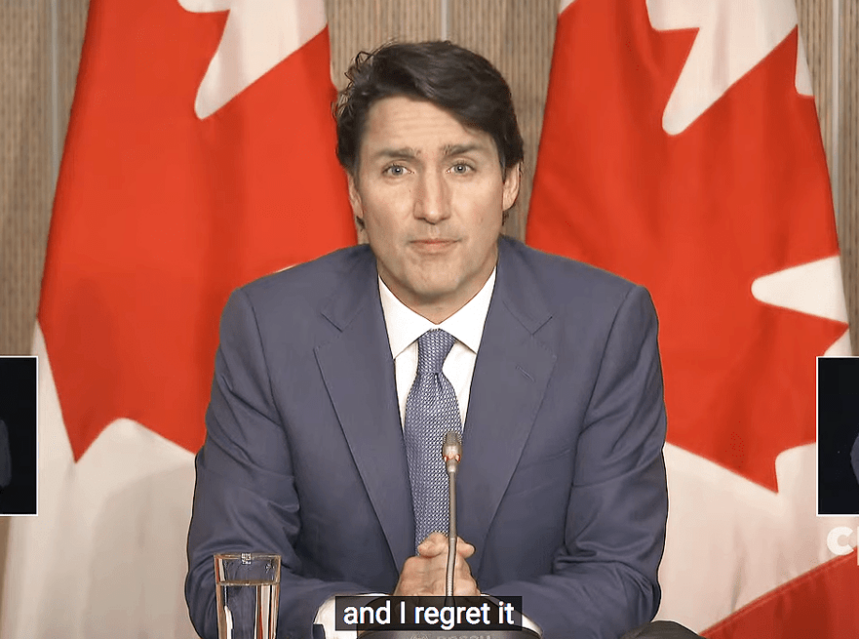 TORONTO, ON, Oct. 6, 2021 – Today, at the COVID-19 briefing in Ottawa, Canada’s Prime Minister Justin Trudeau said it was a mistake to choose to vacation on National Day of Truth and Recnonciliation. Trudeau had been criticized last Thursday for travelling to Tofino, B.C. with family, following an official National ceremony held in Ottawa on Wednesday night.

“Travelling on September 30th was a mistake and I regret it, ” said the Prime Minister. “The first National Day for Truth and Reconciliation is a time for Indigenous People and non-Indigenous people alike to reflect and connect, think about the past but also focus on the future,” added Prime Minister Trudeau.

He then said he issued a formal apology yesterday to Kukpi7, Chief Roseanne Casimir of Tk’emlúps te Secwépemc Nation, “I want to thank Chief Casimir of the Tk’emlúps for the conversation we had over the weekend, in which I apologised for not being there with her and her community for this important day, and I committed to going to visit Tk’emlúps te Secwépemc community in the coming weeks. There is a lot of work for us all to do and I am committed to doing it,” said Prime Minister Justin Trudeau.

“I was in error to choose to travel on that day and I apologised directly to Chief Casimir, for not having attnded the event that she invited me to” reiterated Trudeau after being asked why he travelled on the National Day of Truth and Reconciliation.

“We will continue to do even more on the path of reconciliation, added Trudeau. “Whether it’s continuing to eliminate long-term boil water advisories, whether it’s making sure there’s better investments in housing and support for kids going to new and better schools across the country and in Indigenous communities, there is much work to do and I am committed to doing it,” said Prime Minister Trudeau.

Federal public servants in the core public administration must be fully vaccinated by October 29. Unvaccinated employees will be place on unpaid leave by November 15. This includes those who work in the federal government’s various departments, the RCMP, Canada Border Services Agency, Correctional Services of Canada, and many other offices and agencies.

“We are taking this step to protect those who work in the federal public service and their families and their communities” said Freeland. “We are also directing Crown corporations and agencies to implement policies that mirror those we are announcing today,” added Freeland.

Also in the announcement, Prime Minister Justin Trudeau said by the end of October those ages 12 and older travelling by plane, train or cruise ship in Canada must be fully vaccinated. There will be a short period where people who are in the process of getting vaccinated can show a negative COVID test but by the end of November proof of vaccination will be mandatory to travel in Canada.

“Testing will no longer be an option before boarding,” said Prime Minister Trudeau. “If you’ve done the right thing and gotten vaccinated you deserve the freedom to be safe from COVID-19. To have your kids safe from COVID and to get back to the things you love.,” said Trudeau. “And if you haven’t gotten your shots yet but want to travel this winter, let’s be clear, there will only be a few extremely narrow exceptions like a valid medical condition. For the vast majority of people, the rules are very simple. To travel you have got to be vaccinated,” emphasised Canada’s Prime Minister.