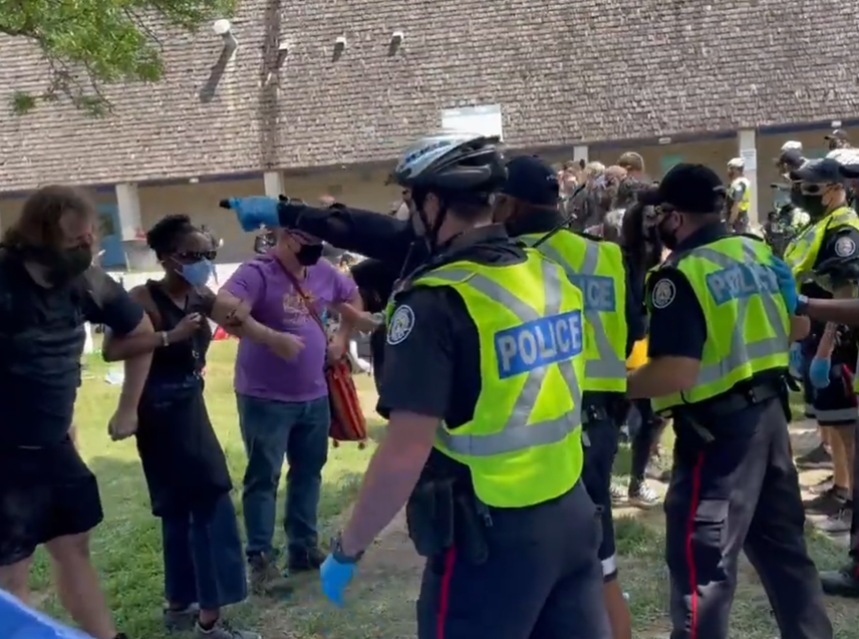 City says all those experiencing homelessness in this encampment, (between 14 and 17), are being offered safe, indoor space, with access to meals and more

This morning, the City of Toronto began the enforcement of trespass notices that were issued at Lamport Stadium park near King and Dufferin on June 12. Dozens of people showed up and were linking arms around tents and structures at the encampment in support of homeless individuals living there.

Many of the supporters were there as a call to action by the Encampment Supporters Network ESN). ESN say the City of Toronto has repeatedly said that they’ve offered shelter or housing to everyone in encampments, justifying forced evictions by insisting that there’s space for everyone inside. ESN says that the “shelter system being offered isn’t safe for everyone, but even when people want to get in, it’s really hard.”

“The system is broken,” they say. “People should be able to make choices about where to live, for their safety and survival. The video below, posted to their Instagram account explains how many homeless like Casey, can fall through the cracks.”

The city says all individuals experiencing homelessness estimated to be between 14 and 17, are being offered safe, indoor space, with access to meals, showers and laundry, harm reduction, physical and mental health supports, and a housing worker.

At Lamport as many as an estimated 22 arrests were made when some people did not cooperate with the police. One police officer and one security guard sustained minor injuries.

City of Toronto says that occupants are given time to pack two bags of belongings to take with them. All other belongings will be collected and stored for up to 30 days for future pickup. There are more than 30 structures on-site, including tents and makeshift structures.

The Toronto Police Service were present today at the request of the City to ensure the safety of encampment occupants, City workers and the public.

Risks of living in encampments

As outlined in the City Manager’s report to City Council in June, the City says encampments contravene several chapters of the Municipal Code and are not a solution to homelessness. The health outcomes for people who stay outside are complex and serious. The City says Individuals living in encampments are also at risk of contracting COVID-19, while the homeless support groups say there is an equal COVID risk in the shelters.

City officials say its “parks also must be ready, safe and accessible to all. City staff, once encampment occupants have left the area, will begin to remove debris and start the process for restoring the grounds.

“Currently, an estimated 50 to 60 people are staying in encampments at Lamport Stadium, Moss Park and Cherry Beach Park, with far more tents and makeshift structures (more than 100) in those encampments than people.”

“The City of Toronto continues to help and protect people experiencing homelessness through COVID-19 vaccinations, an increased focus on infection prevention and control (IPAC) measures in the shelter system, a COVID-19 rapid testing program for new shelter residents, and by referring people to indoor accommodation and access to a housing worker. Since June 15, 108 people staying in encampments, including eight people this past week, have been referred to safe inside space. Since last spring, the City has referred more than 780 people from Moss Park, Lamport Stadium, Alexandra Park and Trinity Bellwoods Park to safe inside space.”

City of Toronto says its staff attempting to assist those experiencing homelessness are increasingly facing intimidation, threats and criminal harassment by advocates or protestors at encampments. This behaviour is unacceptable, and the City is committed to ensuring that employees are protected from harassment in the workplace.

To this end, over the last several months the City has announced nine new supportive housing projects consisting of more than 700 new homes across the city. The new housing will be developed through acquisition and renovation of existing properties or modular construction on City-owned or controlled lands. A map and information is available online.

“Bringing people inside means there are fewer people experiencing homelessness living outdoors and exposed to higher health and safety risks,” says the news release by City of Toronto. “Supportive housing offers a warm, safe place to call home; the necessities of life such as food, washrooms, and laundry facilities; and the opportunity for strengthened community connections.”

All occupants of encampments and residents in shelters, including the hotel program, are offered a housing worker to help them move from a shelter into secure permanent housing.

The City’s response to encampments takes into consideration the health and well-being of those living outside and the broader community needs, including access to green space for safe outdoor recreation during the pandemic, and upcoming summer parks programming and permitting requirements including for summer camps.

The City has an interdivisional response to encampments and will enforce bylaws at encampments after exhausting all options to help people move from encampments to safer, indoor spaces. Space remains available for all those living in encampments in the City’s shelters and its hotel program.

Additional information about homelessness in Toronto: