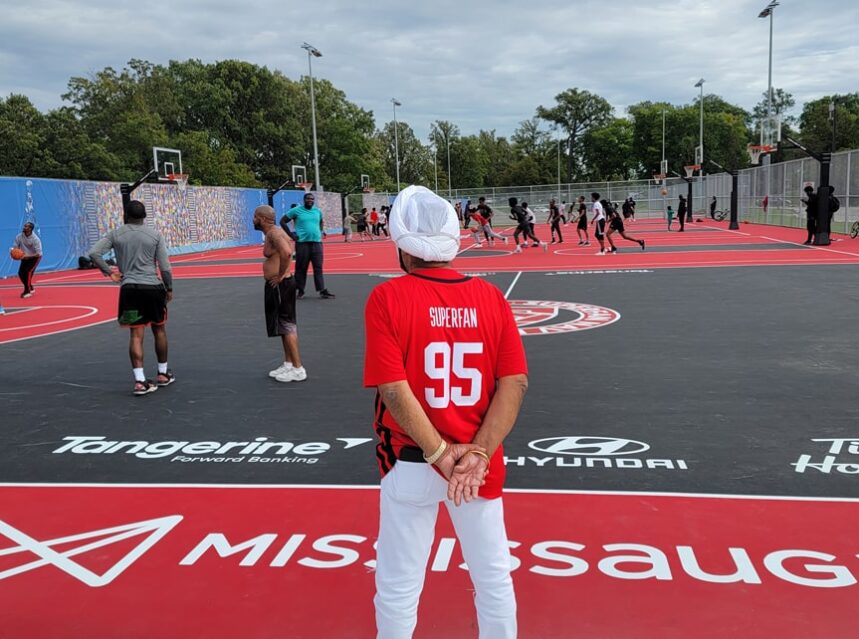 “The addition of these courts brings something extra special to the Malton community and to Mississauga as a whole. Basketball lovers from across the city will come here to play, connect and bond over the game,” said Mayor Bonnie Crombie. “Thank you to Nav and the Superfan Foundation for their partnership and support in helping make Mississauga a thriving place where the sports stars of tomorrow come to play.”

In addition to three full-sized courts, perfect for 3-on-3 games, there is also one International Basketball Federation (FIBA) regulation size court, which is ideal for hosting tournaments and housing fans.

“I am very thankful to Nav and his foundation for their contributions and commitment to the Malton community,” said Ward 5 Councillor, Carolyn Parrish. “They have really made an impact on Mississauga, and this is just the beginning. These are the kinds of projects that puts Malton on the map and helps our community shine.”

In February 2020, Raptors Superfan, Nav Bhatia, donated $150,000 towards the renovation of the basketball courts at Paul Coffey. After months of construction and rebuilding, the courts are now ready for leisure and competitive play.

When asked about the contribution, Nav Bhatia said, “Malton is very special to me. It is where my family began our life in Canada. It was here we were embraced by the rich diversity of the community; families much like ours, excited to begin their lives in Canada or to help those newly arrived. The people of Malton/Mississauga gave us the strength to build the life we have today. There is no better place I can imagine constructing the first Superfan Nav Bhatia courts for the youth than in Malton. We are proud to give back with these courts. Basketball changed my life and I hope these courts will bring people together for generations to come.”

The redevelopment of Paul Coffey Park was part of the City’s 2019 Parks and Forestry Master Plan, which focused on growing, connecting and developing parkland.

The Park development provided an opportunity for the Superfan Nav Bhatia Foundation to promote its goal of uniting “people of all ages and backgrounds through the game of basketball.” These courts will also be hosting the first of many Superfan Nav Bhatia Celebrity Basketball Camps, with the first camp being held in summer of 2022. To reach this goal, the Foundation teamed up with Gold sponsor, Tangerine Bank, as part of their ongoing commitment to empowering communities through Tangerine Project Forward™.

“Community is a part of our DNA at Tangerine, and through Tangerine Project Forward™, we partner with many organizations that help deliver programs that inspire self-confidence, belonging and acceptance to hundreds of youth across the country,” said Eric Nachman, Director of Marketing Partnerships, Tangerine Bank. “We’re excited to see how these new courts will unite communities, and even the country, through sport.”

Tim Hortons and Hyundai Canada have also partnered with the Foundation as Silver Sponsors of the Superfan Nav Bhatia Celebrity Basketball Camps.

Located in Ward 5, Malton’s Paul Coffey Park is a multi-use community park. The Park is 112.4 acres which allows plenty of space for many activities. The Future Directions Parks and Forestry Master Plan is responsible for putting the renovations at the park into action including the Paul Coffey Arena and the new Malton Adventure playground.

The Nav Bhatia Superfan Foundation is a non-profit organization that is committed to raising money to build basketball courts and camps for youth across the globe. The Nav Bhatia Foundation was started by past Malton resident and Raptor’s Superfan, Nav Bhatia.