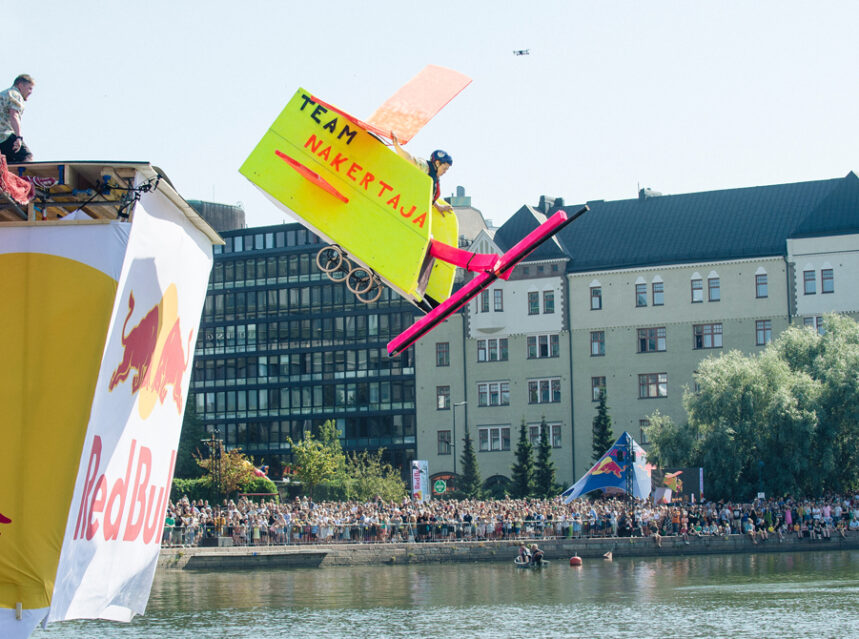 TORONTO, Sept. 15, 2022 – You know that when Red Bull is involved, people will be pushed to their limits, and this high-flying event coming to Toronto’s waterfront on September 24th is as bizarre and exciting as its name, ‘Flugtag.’

Flugtag, pronounced “FLOOG-TOG,” means “flying day” in German and it challenges wacky engineers and fearless pilots to fulfill their dream of flying. First they construct their flying machine. Then they take a leap of faith. Or, as is more often the case, plunge into the waters of Lake Ontario below.

That’s right! Red Bull Flugtag is returning to Toronto’s renowned Ontario Place on September 24th, 2022, and is FREE TO ENTER.

When daredevil moxie, imaginative engineering, and sensational theatrics collide, the pilots of Red Bull Flugtag glide! Red Bull has produced more than 100 Flugtags around the world — from Rome to Toronto. The first Red Bull Flugtag took place in 1991 in Vienna, Austria, as the brainchild of Red Bull founder Dietrich Mateschitz.

Toronto’s waterfront will be the setting for a rowdy roster of over thirty gravity denying teams set to catapult into the Great Lake as they battle for the Flugtag crown. To give you a sense of what’s to come, Red Bull has rounded up five teams from all over the globe — each with their own miraculous combination of brains, wit, creativity, and camaraderie—whose flights (or lack thereof) we just can’t get out of our heads.

During the Event, all Participants will be judged by the official Event Judging panel (the “Event Judges”), as selected by Red Bull in its sole discretion. The Event Judges will base their decisions on the following criteria (the “Event Criteria”): (i) Creativity of Craft design (maximum of 50 points) (“Creativity”); (ii) Showmanship of the Craft and Crew, including a stage performance of up to thirty (30) seconds (maximum of 50 points) (“Showmanship”); and (iii) Distance (electronically recorded in feet; the “Flight Distance”).

Red Bull says “Absurdity can get you pretty far in this competition. Teams are judged on creativity and showmanship equally to distance travelled, so it’s not uncommon for those who didn’t technically fly the farthest to still achieve substantial glory.”

Some of this year’s high flyers or in this case plummetters include: the Chicken Whisperers from California, Blank Space from Hong Kong and team iii of Baar, Switzerland.

Gates open at 10am, and all the entertaining action follows at 11am, followed by closing ceremonies at 2:10 pm. Up to 14 food vendors are expected to be on-site, as well as a Beer Garden.

Don’t miss out! Here’s what you can bring:

What you cannot bring: weapons of any kind, framed or large backpacks, alcohol, glass containers, food, pets, tents, no illegal vending is permitted.