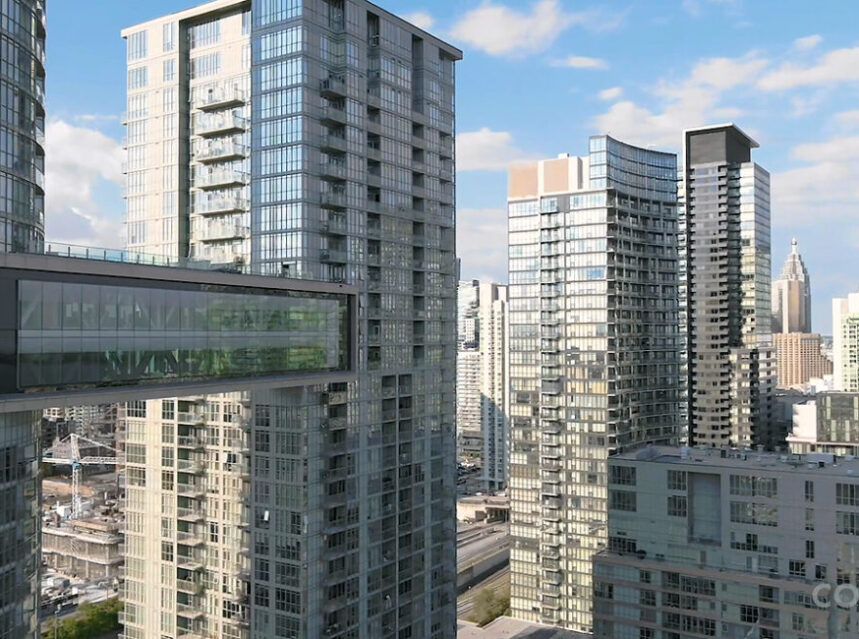 TORONTO, Jan. 13, 2021 — It’s a lair fit for Mr. James Bond himself. The long-awaited Bridge Suites, Concord’s iconic addition to the Toronto skyline, is finally unveiled. Globally recognized as an architectural feat, the Bridge Suites were built into Parade’s SkyBridge at the foot of Canoe Landing Park and have been a source of curiosity throughout the city – and the world – since inception.

As the country’s highest (and largest) suspended residence, the jaw-dropping Bridge Suites are an engineering and architectural marvel. The 450 tonne, 40 metre structure that took over 14 hours to lift into place is no longer a mystery. Its unique outlook suspended in the sky allows for unobstructed vistas to Lake Ontario in one direction and miles of city views to the other.

“Rarely in a city can you point in the sky and say definitively, ‘I live there,” however, the uniqueness of this residence makes it very hard to miss,” said Isaac Chan, Vice President, Sales and Marketing at Concord Adex. “The Bridge Suites have long sparked intrigue from Torontonians and we’re excited to pull back the curtain and finally give everyone the grand tour of this incredible space.”

The Grand Bridge Suite, listed at $4,550,000, is the larger of the two suites and the only one to be publicly offered. It is 4,168 square feet of living space spanning 3 floors including double height living, dining and study. Featuring timeless design, finishes and furnishings from LIV Design Studio, the SkyBridge also boasts an 823 square foot outdoor retreat serviced by an indoor bar and sunroom. The master bedroom comes with Toronto’s ultimate bathing area, boasting breathtaking views of the lake. Additionally, the suite is equipped with private three car garage and premium storage space.

“This project was unlike any other due to the true uniqueness of the space,” said Olivia Lam, Principal, LIV Design Studio. “The architecture is so unique that creating the right balance of program and timelessness was a welcome challenge.”

Concord has been building Canada’s largest lifestyle-forward urban communities for over 30 years. Concord Pacific Place in Vancouver and Concord CityPlace in Toronto are the country’s two largest urban master-plans. Concord also expanded to Seattle’s tech hub in the United States and London, UK including the completion of Principal Tower in the Principal Place neighbourhood, home to Amazon UK. These communities are renowned for their vibrant urban planning and have been emulated globally. The award-winning developer is Canada’s most substantial contributor of city parks and privately funded public art. In addition to their design sustained neighbourhoods, the company’s green energy arm generates twice the amount of energy needed to power them.