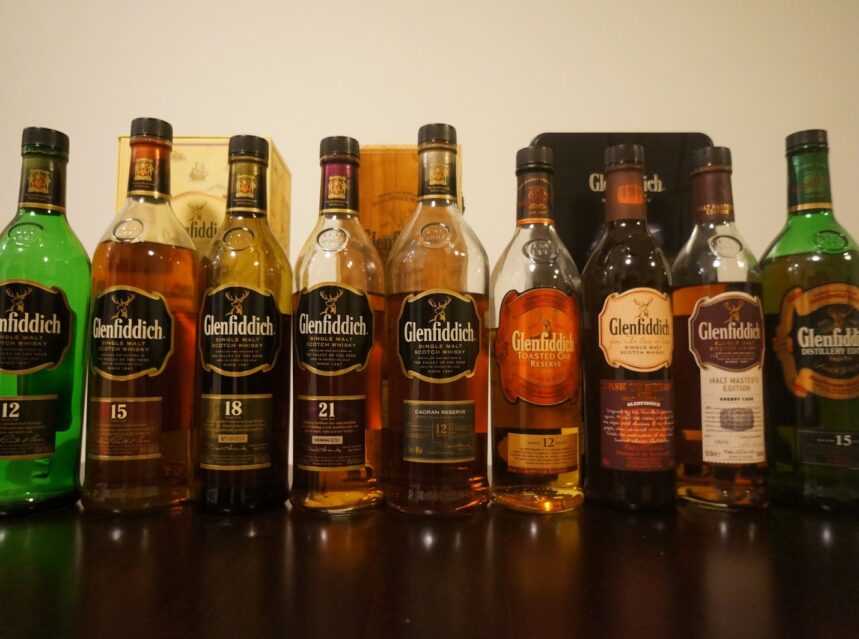 Glenfiddich is a scotch whisky that hardly needs an introduction.Unless you are from planet mars, you have seen their iconic bottle in a billboard, duty free shop or at the SAQ and LCBO. This Scottish distillery was  founded in 1887 by William Grant. Glenfiddich, is Gaelic for ‘’Valley of the Deer’’.The company pioneered the single malt scotch category in the early 1960’s. Nowadays, they have 30% market share worldwide in the single malt segment. Glenfiddich is one of the most recognized brands in the Canadian market as well. In fact, they have 25% of the   Canadian market share.

I recently had a chance to chat with Elizabeth Havers, the Canadian Brand Ambassador for Balvenie & Glenfiddich. Elizabeth is viewed as a pioneer in the spirit industry and is well respected among her peers. She has helped to raise awareness of Whisky to women by founding the first Whisky appreciation club in Toronto, Ontario. Also,  Elizabeth Havers, was presented  with the Icon of Whisky Rest of World 2016 Scotch Whisky Brand Ambassador of the year Award in Whisky Magazine.

Miss Havers was in Montreal for the late edition of  La Grande Degustation in which one of the themes was whiskies of the world.Although not her first time in Montreal, this was the first time that she assisted at this prestigious tasting event. She was impressed with the attendees knowledge of  Scotch whiskies. Not surprising, Quebec is the second  important market for Glenfiddich after Ontario.

Glenfiddich has over 10 bottlings of scotch which include 12, 15, 18, 21 and 40 years.Recently, they also have launched  the avant garde  Project 20 in which Miss Havers was involved.

One of the first pair of entries in Glenfiddich Experimental Series, Project 20 started as a whisky created by the distillery’s 20 brand ambassadors – each selected a cask and master blender Brian Kinsman combined them to create the template for this 47%, non-chill-filtered whisky. It’s a mix of sherry casks, bourbon casks and more, with a rich and spicy character

I had a chance to talk about the basics of whisky tasting and women interest for scotch in general. Also, I learned a few interesting trivia about Glenfiddich. Similar to wine, there are four key elements when you approach a whisky: type of glass, nose, palate and the finish. Another important factor is the choice to add water or ice.

A common but important  question: water or ice. It is all down to personal taste. Always taste whisky in its natural state first and then add water as this can release further flavours and complexity, especially in higher alcohol level or cask strength whiskies. It is far more pleasant with water in some cases and how much water you add is up to you, dependent on your taste. Havers advises that a bit of water helps to activate the nuances of the whisky. On the other hand, ice is different  as it drops the temperature of the whisky and inhibits some of the characteristics from emerging.

Until just a few years ago, close to a decade or so, finding  a platoon of women in a whiskey  events was about as rare as finding an orchid in the desert. And so all of a sudden, there is feverish interest in whisky by women. Miss Havers attributes this phenomena simply to the fact that ladies just want to try something different. Other tangible  reasons include women increased exposure to gastronomy and the finer things of life.

Not only woman but also an increasing number of young people are getting into scotch.To quote Miss Havers “ These are interesting times for scoth whisky “. Gone are days when drinking scotch was exclusively an affair of  older snuffy  gentleman. At some point, it is still. Responding to their parent’s affinity for beer and wine, Generation Y or the Millennials, are continuing the path  where their grandparents left off, and enjoying the pleasures of three fingers of whiskey while socializing. It has a romantic image that appeals to its drinkers.

Another reason for the increased interest of scotch is about life stage. As 20-somethings have their first taste of disposable income, single, club and barmen and women crowd want to use that income to show off their maturation and social standing—and might see scotch as a sophisticated drink. Glenfiddich keeps up with the trend and they actively promote their brand in Facebook, Twitter and Instagram.

I also was surprised to learn from Miss Havers Glenfiddich versatility with food pairings. Certain whiskies and certain foods are a veritable match made in heaven. But you only find these beautiful pairings if you’re prepared to look for them. All you need is an open mind and a nose for a good adventure. Havers suggest pairing the 15 years old with chocolate while Glenfiddich 18’s can be enjoyed with roast beef.

Glenfiddich is also one of the few distilleries involved in social causes including the Wounded Warriors cause. Since 2012, the company has pledge to donate $2 from the sale of each bottle of Glenfiddich 15 Year Old in Canada to this charity. The funds raised through the program will allow Wounded Warriors to continue to provide social that aid in the healing of Canada’s Armed Forces members, veterans, and their surviving families. According to Miss Havers, Glenfiddich has raised $550,000 for the cause since the inception of the program.

After 12 years aging,  this signature single malt by Glenfiddich is the pioneer of the elite single malt category. It offers a unique fresh and fruity nose with a nuance  of pear followed in the  palate by notes of butterscotch, cream, malt and a subtle oak thanks to its long rest in Oloroso sherry and bourbon oak casks.

Stewed apple and a slightly tart, smoky scent dominate at the beginning of the nose.. Very dark caramelized wood and with a lovely perfume follow. As the whisky opens up, chewy toffee becomes apparent, transforming into the smell of a french brioche.

On the palate, flavors bring to mind toasted wheat with caramel and cloves. Dense and rich in the mouth feel, it particularly uplifts your palate. Flavors bring to mind butter and honey with a finale that brings to mind roasted figs. Lingering and satisfying, with an echo of grassiness in the aftertaste.