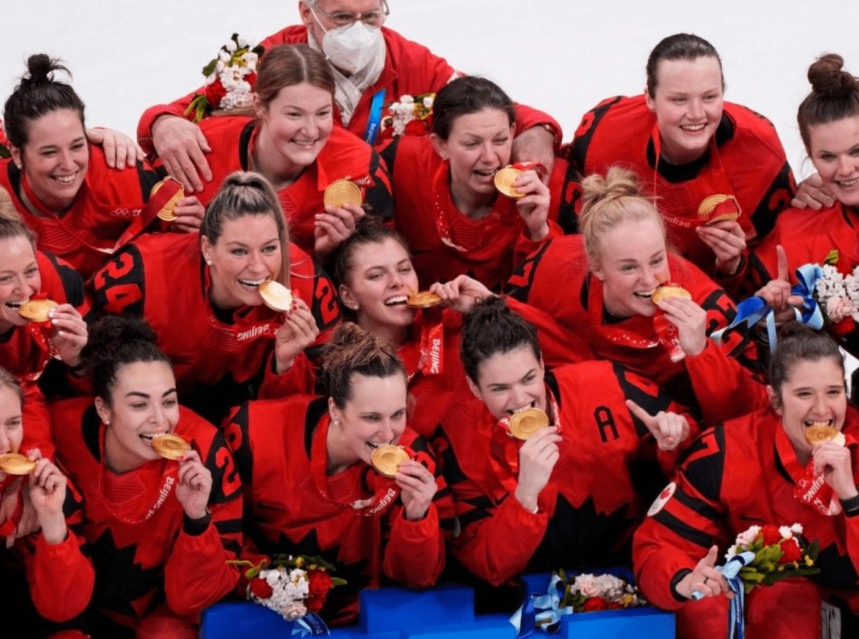 TORONTO, ON, Feb. 17, 2022 – The Canadian women’s Olympic hockey team have won gold in Beijing 2022 with and exciting narrow 3-2 victory over their perennial rivals, the United States of America.

Many pundits are calling them the strongest Canadian women’s team ever assembled and they were led by players like Sarah Nurse who opened the scoring early in the first period and finished the Olympic tournament with five goals and 13 assists, setting a tournament points record previously held by Canada’s Hayley Wickenheiser in 2010.

Canada’s team captain Marie-Philip Poulin, who had a solid tournament added a pair of goals before Hilary Knight scored early in the second period for the U.S.

The game was a battle royale and came down to the wire as The USA’s Amanda Kessel scored with their goalie pulled and a two player advantage with 12.5 seconds left in the third period. But time ran out on the USA and Canada captured Olympic Gold.

At the buzzer, Canada’s goalie Ann-Renee Desbiens who stopped 38 shots launched her goalie gloves in the air and the team began an emotional hard earned celebration.

After losing in the 2018 final, “everybody was so dialed in, in order to bring back that gold medal. It was so special,” Canada’s team captain Marie-Philip Poulin told reporters at the post-game presser.

MVP for the tournament was Canada’s Brianne Jenner who tied a tournament high iteam-leading scoring record with nine goals.

In the 2018 Winter Games Gold Medal game in South Korea, Canada took Silver, after losing 3-2 to the USA. This is Canada’s fifth women’s hockey Olympic gold medal. Canada’s national women’s team have reached every final since women’s hockey made its Olympic debut in 1998 in Nagano, Japan.

Canada’s medal total at Beijing 2022 now stands at 19 medals with four of those medals being gold.