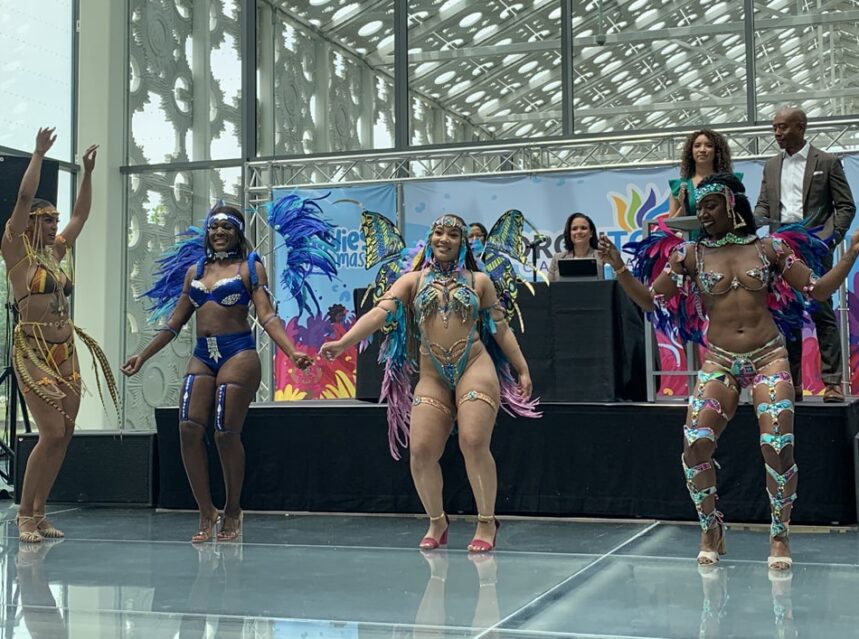 TORONTO, June 8, 2022 – The Toronto Caribbean Carnival hosted a Media event at Hotel X, the site of the all-new Grand Parade Central, on June 6 to share all the exciting details on this year’s 55th anniversary of the hugely popular Toronto festival. Hosted by CTV’s News Anchors – Nathan Downer and Jessica Smith, the televised event provided media, partners, and sponsors the first look at what festival-goers can expect this year, including spectacular costumes, groovy Caribbean music, dance and delicious spicy Caribbean cuisine.

To kick-off off the festival season, the Toronto Caribbean Carnival’s Official launch will take place on July 7 at Nathan Phillips Square from 11 am to 8 pm. Thousands of people regularly attend this annual event, including live entertainment, costumes, and special guest appearances. This year, the festival announced a full day of programming, with special performances, Caribbean food vendors, and a lineup of DJs.

“Kiddies for Mas” was introduced as a separate event in Scarborough – Junior King & Queen Showcase and Junior Carnival Parade.

The Junior King and Queen Showcase will celebrate its 3rd year staged at a new venue, Scarborough Town Centre (Parking lot at Triton Rd and Borough Dr), on July 10, 2022, from 2:00 pm to 8:00 pm. The event will include children’s activities, entertainment, music, food vendors, and arts & craft vendors. An estimated 30 Junior Kings, Queens, and individuals will participate.

The Junior Carnival comprises approximately 2,000 masqueraders ranging in age from toddlers to sixteen years, with an official opening at 10:30 am at Malvern Park (Malvern Community Centere and ends at 8:00 pm at Neilson Park on July 16, 2022.

During the media event, Celena Seusahai and Cleon Wong were announced as the 2022 “Faces of the Festival,” presented by Carib Beer. The duo will serve as brand ambassadors for the festival, working with the organizers to engage the community and promote the festival.

The Toronto Caribbean Carnival has curated an exciting program of events leading up to the Grand Parade:

For more information on the 2022 calendar of events or how to participate with a Mas Band, please visit https://torontocarnival.ca/.