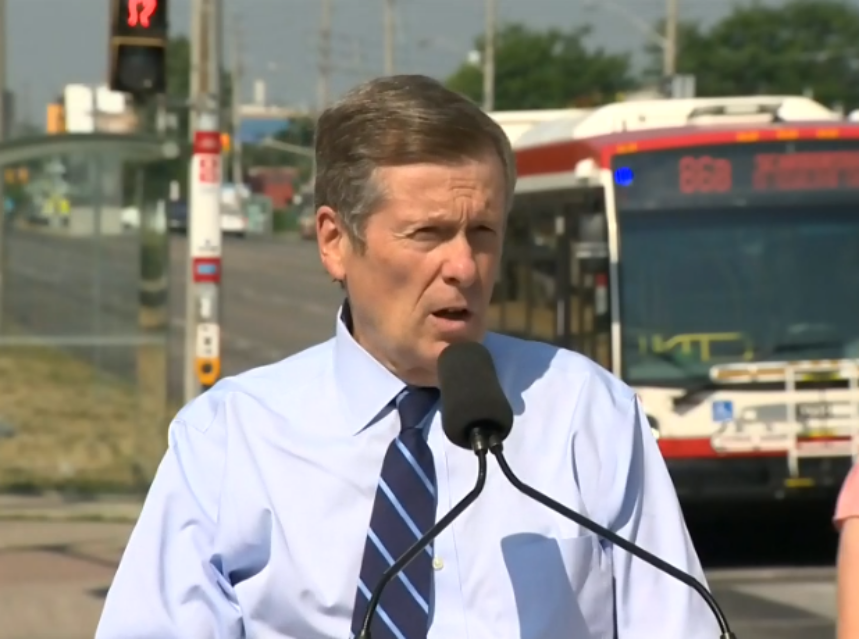 TORONTO, ON., July 8, 2020 — Today, Mayor John Tory, announced that a new priority bus-only lane from Kennedy Station to the University of Toronto’s Scarborough campus should be in place by this fall. The mayor joined by TTC CEO Rick Leary, Councillor Paul Ainslie, Councillor Gary Crawford and Councillor and TTC Commissioner Jennifer McKelvie, announced the proposed plan to expedite the implementation of priority bus-only lanes across the city.

“We picked Eglinton East as the first project because it is one of the busiest bus corridors in the city, even during the pandemic,” Tory told the media at a press conference on Eglinton. “Those that rely on the bus system in this area need it to be faster more reliable and safer so that they can get to work around the city,” said Tory.

“As Toronto re-opens and recovery begins, the TTC’s surface transit network will play a critical role in getting people around the City,” said Mayor John Tory. “Expediting the priority bus-only lanes along the Eglinton corridor will help move people across Scarborough quickly, safely and reliably so that they can spend less time commuting. Enhancing service will also ensure the TTC continues to be an attractive mobility option for residents, helping us reduce congestion and the environmental impacts associated with dependence on the car,” said Tory.

The proposed plan anticipates that the improved speed, reliability and increased capacity of the new priority bus-only lanes will result in a faster and more reliable commute, which will improve access to employment, healthcare and community services, as well as transit equity and inclusion of Neighborhood Improvement Areas for residents.

“The TTC is the primary means of travel for many people in Toronto,” said Rick Leary, CEO, TTC. “The transit system has a critical role to play in the economic restart and recovery of the city. Bus trips represent the largest total vehicle mode both before COVID-19 and throughout the pandemic. Bus priority lanes are an important step in keeping the TTC ahead of the ridership curve and are an immediate benefit to our customers. Accelerating the implementation of bus priority lanes is one way to ensure that our riders can reach their destinations in a safer and more timely manner. ”

The TTC’s 5-Year Service Plan & 10-Year Outlook  released in December 2019, outlined a proposal to explore priority bus-only lanes and other service-enhancing measures on five of its busiest corridors.

The six corridors, which had a combined, pre-COVID-19 ridership of approximately 220,000 passengers per weekday, include:

The recommendation is to prioritize the acceleration of the following busy bus corridors:

The Eglinton East bus corridor is among TTC’s most heavily used and, even during COVID-19, continues to play a significant role in moving people around the city. It emerged as the top candidate for the accelerated installation of priority bus lanes based on an assessment of a number of factors including improvement to transit reliability, available right-of-way and considerations for transportation equity and inclusion of Neighbourhood Improvement Areas.

The 8.5-kilometre Eglinton East corridor runs along Eglinton Avenue East, Kingston Road and Morningside Avenue from Brimley Road, through to the University of Toronto Scarborough Campus. The existing High Occupancy Vehicle (HOV) lanes on Eglinton Avenue East would be converted to priority bus-only lanes, while curbside general-purpose lanes on Kingston Road and Morningside Avenue would be converted to priority bus-only lanes. The priority bus lanes would be reserved for bus-only use 24 hours a day, seven days a week, would be identified using red surface treatment and signage and would have a one-time installation cost of approximately $7.8 million.

The proposed priority bus-only lane on the Eglinton East corridor is anticipated to increase transit reliability and reduce transit travel time on average between two to five minutes per trip. The time savings achieved equate to annual savings of $2.5 million in operating costs and a one-time capital cost savings of approximately $6.3 million, as a result of fewer buses required to provide the same level of service on the corridor. These cost savings could allow the TTC to reinvest in other transit opportunities in this corridor, as demand increases or in other areas of the city where there is crowding.

The COVID-19 crisis has shown that the TTC is vital to hundreds of thousands of customers who use the services to travel to essential destinations including grocery stores, pharmacies, healthcare facilities and employment. Ridership data has demonstrated that through the pandemic the TTC’s bus customers have relied more heavily on transit services, with 36 per cent of bus customers continuing to use the TTC system, compared to 19 per cent of subway customers.

More information including, ridership data, graphics and maps can be found in the TTC report .