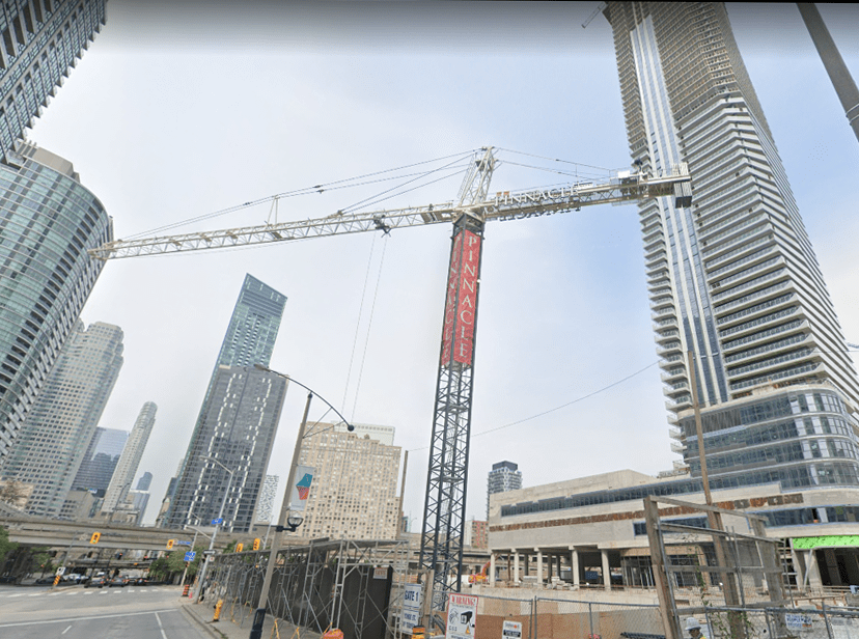 TORONTO ON, January 21, 2022 — Yes, you heard that right Toronto is getting Canada’s first elementary school built within a condo. Announced today by the Ontario government, the province is investing $44 million to build the new Lower Yonge Precinct Elementary School on the third floor of a condo near Toronto’s waterfront.

This historic investment aimed at supporting families in urban communities in the City of Toronto through the Toronto District School Board, announced by Stephen Lecce, Minister of Education, and Kinga Surma, Minister of Infrastructure, will create 455 student spaces on the third floor of the building at Yonge and Harbour with a projected completion date set for the 2024-25 school year.

In addition to the new school, the City of Toronto says a child care centre will be located directly below the new elementary school on the second floor.

The new school is an innovative project undertaken in collaboration with the school board and Menkes Developments. A podium school, the project is unique in Ontario and will create a school within a new mixed-use condominium project, providing more student accommodation for the lower Yonge and waterfront neighbourhoods.

Once complete, the province aims to replicate the new “high-density” school concept as an “innovative solution to meeting the education needs of working families in urban and high-density environments.”

“With many families living in condos and high-density urban communities, we believe their children deserve access to modern and safe schools in the hearts of their communities,” said Minister Lecce. “I am proud to deliver this progressive urban school within a high-density condominium project. This innovative partnership will provide access for young families to a state-of-the-art school in the heart of Toronto.”

“The new Lower Yonge Precinct Elementary School will be a great new addition to our city and will provide much-needed space for students. We know that in a growing city like Toronto, we need unique and creative approaches to creating important public spaces like schools,” said Toronto Mayor John Tory.

“This new project between the provincial government and Menkes Development will bring the school right into the community at a new mixed-use condominium. If we want to build up this city and our neighbourhoods, we need to ensure that residents have access to all the services they need, including schools – this is one example of how we will achieve this,” said Mayor John Tory.

The Ontario government has committed to provide $14 billion to support school construction over the next 10 years. There are currently more than 300 child care and education building-related projects in development across Ontario with more than 100 actively under construction.

“Innovative infrastructure like the new Lower Yonge Precinct Elementary School not only ensures the best learning environment for our children, it also helps us build more vibrant and resourceful communities. This is part of our government’s plan to invest more than $148 billion over the next 10 years to build schools, hospitals, long-term care facilities, public transit, highways and other facilities families depend on,” said Kinga Surma, Minister of Infrastructure.

Ontario’s investment in new and updated schools will create the foundation for a modern learning environment for hundreds of students across the province.

“We are thrilled to build Canada’s first elementary school that is completely integrated within a high-density mixed-use development right in downtown Toronto,” said Stephanie Donaldson, Trustee, Ward 9, Davenport and Spadina – Fort York. “This is great news for students in the area and an exciting opportunity for the Toronto District School Board to shape an innovative urban school model that can be used across Ontario and Canada.”

The school project has been a concept in the works since 2017 and is finally going to come to fruition. About 13,000 people will eventually be moving into the area as part of the entire lower Yonge precinct project.

Near what will become one of the most unique schools in Toronto there will be access to parks and playground.

The TDSB and Menkes would co-own the third floor of the condo building according to Ryan Bird, Toronto District School Board spokesperson. The school will be like any other, with a music room, gym, classrooms and a library, but of course it will be unique in that it will be Canada’s first school located within a condo.

school within a condo toronto, toronto school inside a condo, where is the condo school going toronto