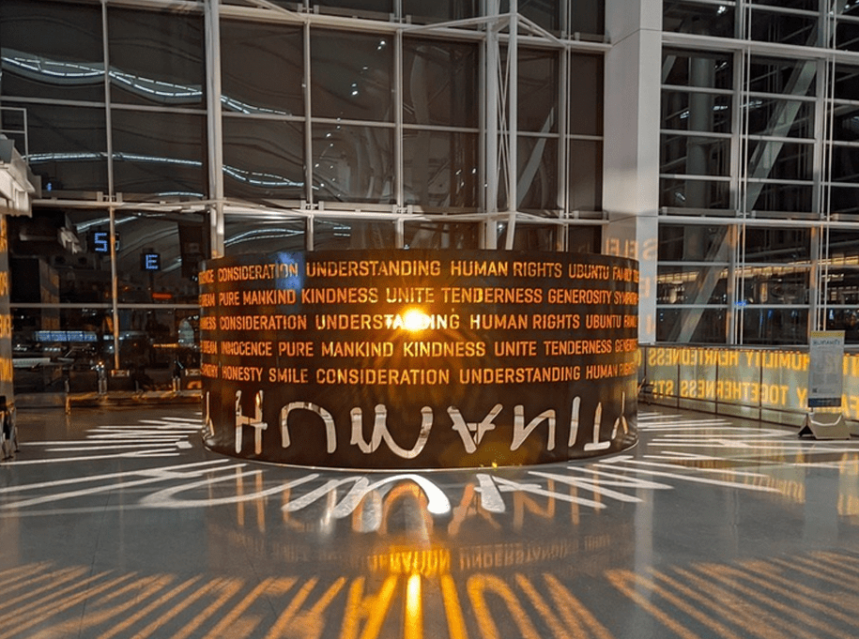 TORONTO, ON, Feb. 23, 2022 – Today, the Greater Toronto Airports Authority’s (GTAA) President and CEO, Deborah Flint, along with Vice-Chairman and President of the Toronto Raptors and Giants of Africa Founder, Masai Ujiri, unveiled the Humanity art installation at Toronto Pearson.

The piece represents a welcome addition to the airport and its focus on human connection and diversity is fitting for its new home given that Pearson connects diverse people and cultures from all over the world. During her speech, Ms. Flint underscored how important this piece—and what it represents—is for Pearson:

“I see a lot of commonalities between the good work that Masai has done with the Humanity Movement and the work that we do here at Pearson every day to help connect the world,” she said. “Chief among those commonalities is a focus on people. Pearson may be one of Canada’s biggest and most vital pieces of infrastructure, but we’re far more than glass and metal—we’re a distinctly human space. This piece reminds us of what’s important, and that is, of course, people—and how we can and should work together to help each other along the way, whatever journey we may be on.”

Launched in 2020, the inspiration behind the Humanity Movement came to Mr. Ujiri from Nelson Mandela’s legacy of fighting for equality and its continued importance in society today. Representing peace, togetherness, youth and diversity, the art installation uses light to create a ripple effect with its words, symbolizing the need to spread more humanity. The 8-foot-high steel structure, lit up from the inside, is made up of 35 words that reflect what humanity means to Ujiri. “I wanted to put a symbol up to remind people that we should see each other as equals, always lead with respect and treat each other with kindness—no bias, prejudice and injustice,” said Mr. Ujiri of the one-of-a-kind piece.

The Humanity piece is on display in Terminal 1, Departures Level, Aisle 1 until May 31, 2022. The piece has previously been displayed in two locations in downtown Toronto at Maple Leaf Square and in front of Union Station.