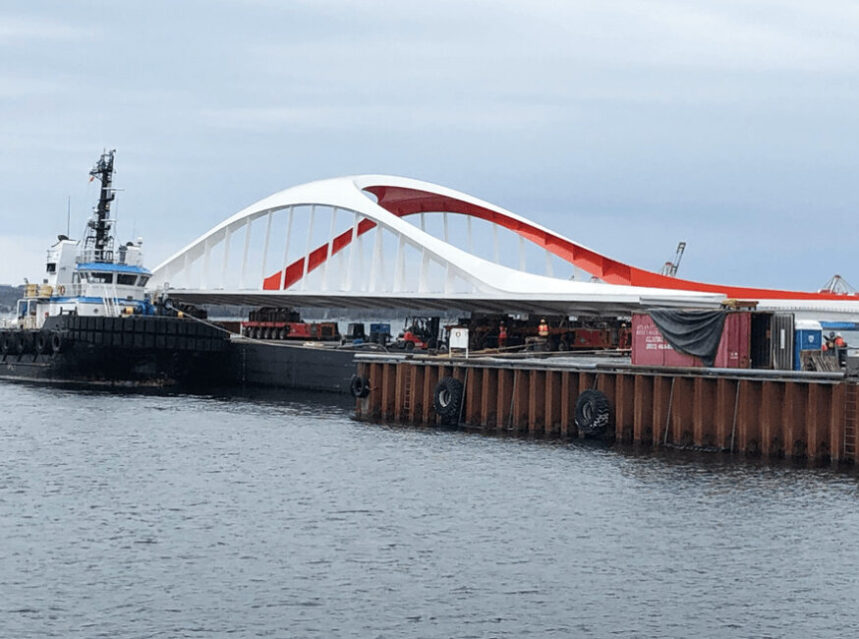 Rocky the Rock Ripper, Toronto Port Lands’ official rock ripping bucket is asking Torontonians to participate in a good ol’ fashioned baby pool… so to speak. You may know Rocky from twitter, where he posts updates about construction in the Port Lands under the handle @theRockRipper.

The Villiers Island Cherry Street North bridge has already arrived and now the Commissioners Bridge is on its way overland from Nova Scotia, so Rocky has come up with a guessing game to predict the date of the arrival of the..new bridge.

“Everyone knows I was pretty jealous of the Cherry Street North Bridge stealing my thunder when it came last fall. But not this time. I’m embracing the next bridge’s arrival as if it was my own baby,” says Rocky on Twitter.

“To celebrate I’m holding a good ol’ fashioned baby pool. Want to play?” Use this form to guess what day and time it’ll arrive in Toronto!

In the Port Lands, when all is said and done, four new bridges will soon connect downtown Toronto to the future Villiers Island, the new island that is being created by extending the Don River through the Port Lands. The first of these bridges arrived in Toronto in November 2020.

The Commissioners Street bridge is being shipped to Toronto in two sections with the western half weighing in at a staggering 340 tonnes and measuring 57 metres long, is already on its way from Dartmouth, Nova Scotia. The eastern half is scheduled to arrive in Summer 2021.

At 152 metres long when complete, the Commissioners Street Bridge is the longest bridge installation on Villiers Island.

As part of Rocky’s contest the winner gets “Your photo digitally added to a photo of the new bridge and shared on Twitter by me, Rocky @TheRockRipper along with “Lots of fake internet points and bragging rights,” quips Rocky. The winner also receives a virtual tour of the bridge once it’s installed (this will be open to anyone who plays, but the winner will be the VIP for the tour).

Rocky says the contest will close when the bridge reaches Montreal. The arrival date in Habs land will be tweeted out and at that point the contest form will be removed.