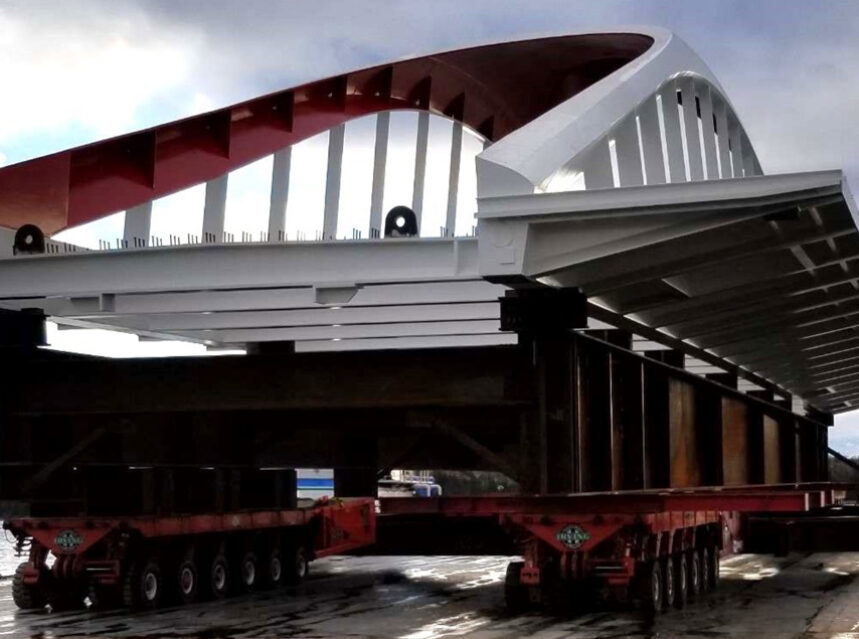 In the coming weeks, a barge carrying the bridge from Nova Scotia will make its way down the St. Lawrence Seaway, before arriving in Toronto’s Harbour

Waterfront Toronto will host a live “bon voyage” party on its Facebook page later today to mark this important moment as the Cherry Street North bridge embarks on its maritime journey.

“The Port Lands Flood Protection project is about to reach an important milestone as the first of the Cherry Street Bridges makes its way from the East coast to Toronto,” said The Honourable Catherine McKenna, Minister of Infrastructure and Communities. This transformative project will forever change Toronto’s waterfront and landscape. The Government of Canada is proud to work with its partners by investing in infrastructure that creates good jobs and builds vibrant, sustainable communities across our country.”

In the coming weeks, a barge carrying the bridge will make its way down the St. Lawrence Seaway, before arriving in Toronto’s Harbour to be installed in the Port Lands. The-57 metre, 350-tonne bridge, is the first of four new bridges that will connect the new Villiers Island to Toronto, and the revitalized Port Lands.

“These bridges will be a connection for the public to access the new island we are building, and bridges that will connect us to Toronto’s future. The bridges are another piece Waterfront Toronto is adding to make our city’s waterfront world class, just as bridges have helped define the image of cities like Chicago and Sydney,” said Waterfront Toronto CEO George Zegarac.

“Work has been continuing all year on the Port Lands project, excavating the new path for the Don River, and creating Villiers Island. Beyond providing critical flood protection, this project is going to deliver a stunning new destination steps from downtown for people to live, work, and enjoy nature, as well as helping to drive Toronto’s economic recovery,” Zegarac concluded.

Waterfront Toronto will provide social media updates as the bridge makes its way to Toronto.

“I look forward to the arrival of the first of the new Cherry Street bridges to Toronto’s inner harbour coming all the way from Nova Scotia,” said Toronto Mayor John Tory. “I know these new bridges will become an iconic part of our waterfront and a signature landmark in our already unique skyline. The Port Lands Flood Protection project is one of the largest waterfront revitalization projects in the world and one of the most ambitious and significant infrastructure projects in Toronto’s history. By working with other levels of government we are ensuring that this project moves forward and building up Toronto’s waterfront for generations to come,” said Tory.