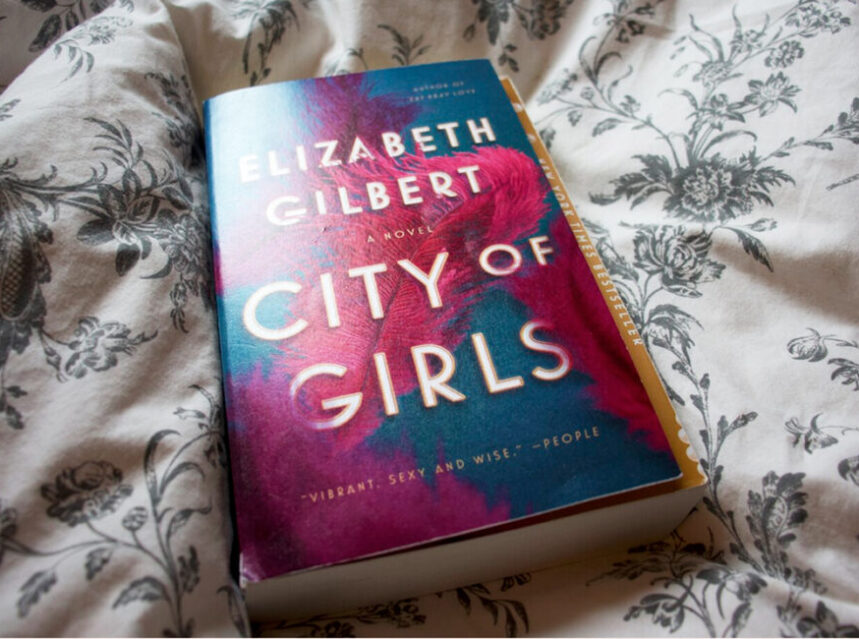 Never in a lifetime would I have expected to be envious of the 1940s and yet…here I am. Now, I’m not saying I’d want to be a woman living during that time and during a war, but there’s something so special about that way of life, and Elizabeth Gilbert’s way of writing about it. Showgirls and theatre and fashion, oh my! 2021 is a great time to be alive (not being sarcastsic, it is a great time) but if I had a chance to visit that time period for a day, I would take it with enthusiasm.

First, let’s talk about the title of this book – “City of Girls.” I actually didn’t read the synopsis for this one because I wanted to be surprised. And I was, that’s undeniable. City of Girls? That could mean anything, and it does mean a lot of things within the context of this book. It takes place in New York City, and there are a lot of girls, yes. But it also takes place during the war, and there really were a lot of girls in comparison to guys at that time. Furthermore, there is an obvious theme of feminism and sexism, as is accurate for our story’s time period. Although, while I say ‘obvious theme’, it is not the subject of the entire story, as it is very layered. Finally, ‘City of Girls’ as a title is actually used by the characters in the novel for their own play, which is absolute genius. My point here is, this book is magic even in just the title!

But I digress, we’re here to discuss ‘City of Girls’, the story, and there is much to discuss. This was a recommendation and a borrow from a close friend and I cannot tell her enough how grateful I am. This sizeable novel (470 pages! That’s a lot for me) had me hooked from the very first page. I was nervous to start it because I feared I may never finish it but I needn’t have worried. It’s difficult to read such a long book without getting bored or having it feel slow at times, but author, Elizabeth Gilbert challenges all of those previous assumptions. In “City of Girls”, we are introduced to Vivian Morris in 2010, who is writing her story to a mysterious unexplained character, Angela. Don’t worry, we find out who Angela is in the end, but I’ll be honest, I really felt as though I was Angela the whole time. That’s how captivating this narrative is.

What I love the most about this book is that it isn’t your typical flash-back-and-forth kind of story that we often read when a character is explaining their past. No, here we get a quick reference to Angela in 2010, and then we jump right into the bustling 1940’s New York City From there the story simply takes off.

Much of the novel occurs in and around the theatre, which of course means we are introduced to a very exotic cast of characters. My favourite one by far is Mr. Herbert, the script writer. Mr. Herbert is a melancholy old man and is incredibly funny. Here’s a little passage that I find particularly amusing, when Vivian is describing his varied responses to ‘Good morning’:

Now I won’t keep you. I’ve disclosed all my thoughts. I must say, I’m not sure whether I’d be thrilled or not to be in Angela’s shoes, receiving a 400-odd page letter from an old lady. But if that old lady had a story as interesting as Vivian Morris, it would be worth the read!