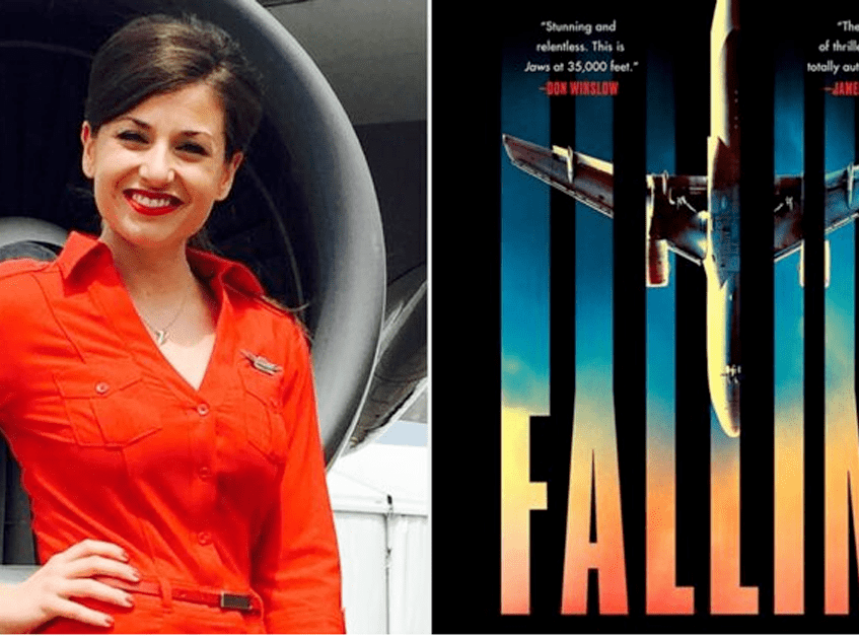 Look at Arthur Hailey’s “Flight into Danger” or “Airport,” Ernest K. Gann’s “The High and the Mighty,” “Passenger 57” with Wesley Snipes or “Snakes on a Plane.” The more outlandishly dangerous the situation, the more people want to see or read it.

And there is always that one hero, whether it be the pilot or a passenger who has that hidden talent of flying any kind of aircraft, who through bravery, wits and talent, pulls that plane and its innocent passengers from the jaws of certain death.

T.J. Newman, a former bookseller and airline flight attendant, captures that danger-in-the-air-spirit of Arthur Hailey and Ernest K. Gann with her debut novel “Falling.” And this book is flying to new heights for a literary debut. It nabbed a seven-figure deal with Avid Reader Press, which in turn sold the film rights to Universal Pictures for another seven figures, and now Ms. Newman is in the midst of penning her second novel, which means she has permanently switched jobs from delivering safety feature demonstrations and serving drinks and snacks to passengers, to writing thrillers for a much larger audience.

And the advance buzz on this book certainly delivers. Falling is like reading Airport and watching Speed at the same time, in which this race against time in the face of imminent danger relentlessly keeps you at the edge of your seat.

The story focuses on Bill Hoffman, a veteran airline pilot who at the last minute is asked by the carrier he works for – Coastal Airways – to captain a cross-country flight from Los Angeles to New York. And as he preps for the coast-to-coast journey at its point of departure – LAX – with his dedicated crew and 143 passengers on board, something unexpected happens.

About half an hour prior to the flight’s departure, Bill’s wife, son and daughter are taken hostage in their own home by a terrorist disguised as a computer repairman named Sam. And it’s not until the plane is airborne that he gets the first of many communiques about the desperate situation at home. Bill is told by the terrorist that as the plane approaches New York, he has to gas the passengers with a canister of poison gas that is mysteriously provided to him, and when that’s done, he will be instructed to crash the plane at a soon-to-be disclosed location in New York City. If Bill refuses, then his family will be killed. Although he is put into what could be a definite no-win situation, Bill is firmly resolved into how he believes it will end up: “I’m not going to crash this plane and you’re not going to kill my family.”

And to paint him further into his corner, Bill is confronted with two more no-win dilemmas; first, he cannot communicate with any national, state or local authorities to inform them of this potentially deadly situation and second, he discovers a further bit of peril within the confines of the cockpit dealing with a member of his flight crew.

However, it’s up to Jo, one the senior members of the flight attendant team and a longtime friend of Bill’s, to bypass the terrorist holding his family hostage and inform the FBI. In particular, her nephew Theo Baldwin, an FBI agent who is on the outs with his firebrand of a supervisor over a number of mistakes on his part, and is about to be on the threshold of being fired from the bureau. It will take a series of clandestine communications and great deal of investigating to find out the real identity of the captor, his motivations, and where they are located, so that Bill’s family can be rescued, without putting the lives of the passengers and crew of Coastal Airways flight 416 at any further risk.

Falling is a thriller filled with plenty of double-barrelled twists, turns, psychological battle of wits, action and suspense, with most of the action done at a perilous 35,000 feet in the air … with one man juggling with the fate of about 150 innocent people both on land and in the air, with one careful decision that he has to make that has everything hanging in the balance.

T.J. Newman has delivered an entertaining literary debut. And if things work out with Falling as it should, then she will become a major new voice in the thriller fiction genre. So fasten your seat belts and get ready for this exciting ride.