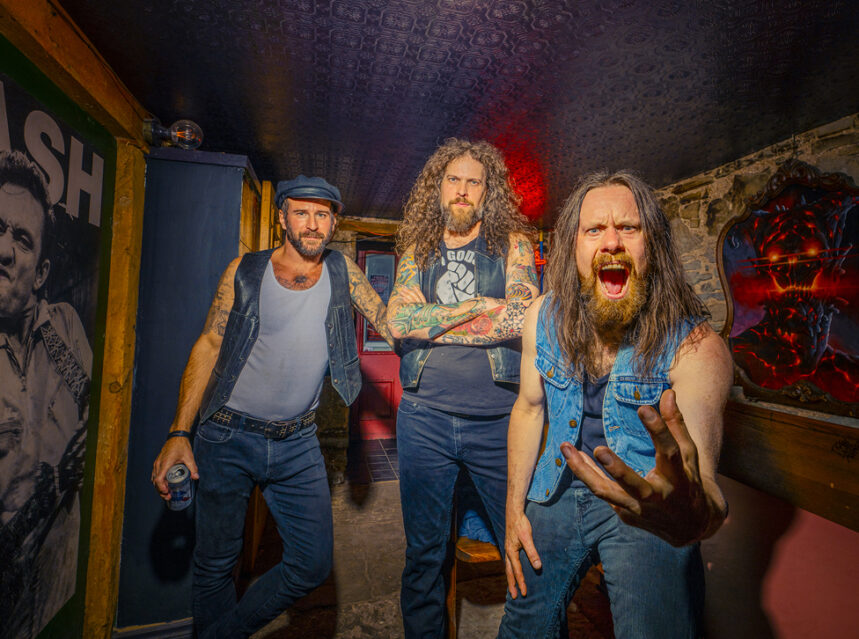 TORONTO, Sept. 30, 2022 – After holding it back for over a year, Hamilton’s thunderous Monster Truck drop their fourth full-length album “Warriors” today, on BMG Canada.

According to lead singer/bassist Jon Harvey, they’d seen some of their peers issue records to minimal response during the pandemic, and were willing to bide their time. He, guitarist Jeremy Widerman, and keyboardist Brandon Bliss did appear at the vast Download Festival in Leicestershire, England in June, and headline Hamilton’s Festival Of Friends in July (their first hometown gig in four years!).

“We’re lucky. After a lot of years of working on the road, now we’ve taken a step back,” the amiable singer says. “We were so burnt-out junk.”

He feels “Warriors” is the Truck’s most fully realized record to date, in keeping with the band credo of have a good time, being respectful, and getting out there and partying. Once again, they worked with producer Eric Ratz (Arkells, Big Wreck),

Their trademark heavy riffery is on full display on tracks like “Golden Woman”, “Live Free”, and the feedback-laden, Black Sabbath-inspired “Fuzz Mountain.”

But the high points here are the Southern-fried cuts, “Get My Things & Go”, and “Country Living.” The former is sitting at No. 6 on Canada’s Active Rock chart and No. 8 on the Mainstream Rock chart, buoyed by a sizzling solo from guitarist Chris Robertson of the Kentucky group Black Stone Cherry.

“He’s fantastic,” Harvey enthuses. “He has been a friend for a while. Those guys have always been like kindred spirits. We’re really lucky to have friends like that. He oozes value.”

Through the course of the records “Furiosity”, “Sittin’ Heavy”, and “True Rockers,” Monster Truck has: won a 2016 Juno for Breakthrough Album Of The Year (for “Furiosity”); earned consistent play on Canadian airwaves; placed songs in video games like EA Sports’ “NHL 2017”, and in the TV show Orphan Black; seen their tune “The Enforcer” became the “goal song” of the Toronto Maple Leafs; and backed star U.S. rap/rocker Kid Rock in his controversial 2021 video “Don’t Tell Me How To Live”.

But they’ve really made their bones from touring relentlessly across Canada, the U.K., and the U.S., getting the chance to share bills with “big guys” like Metallica, Deep Purple, Alice In Chains, Slash, Nickelback, and Billy Talent. What started out as a slacker side project in 2008 has evolved into a touring machine with serious chops.

“That’s the whole thing,” he says. “It makes you such a great band. You practice before shows. We worked so hard when we were (on the road).”

After previously recording on indie imprints with major label distribution, this marks Monster Truck’s true major label debut (while the album is also available on all of the usual streaming platforms). But how much does a record deal matter in this day and age of digital downloading?

“I think it’s great,” he comments. “It’s nice to have people working for you. It’s a good team.”

“It’s nice to be able to have projects, and just work (on them).”

Monster Truck just kicked off a U.K. tour, with drummer Theo McKibbon sitting in for founding member Steve Kiely (who left earlier this year to work on his folky project Golden Feather).