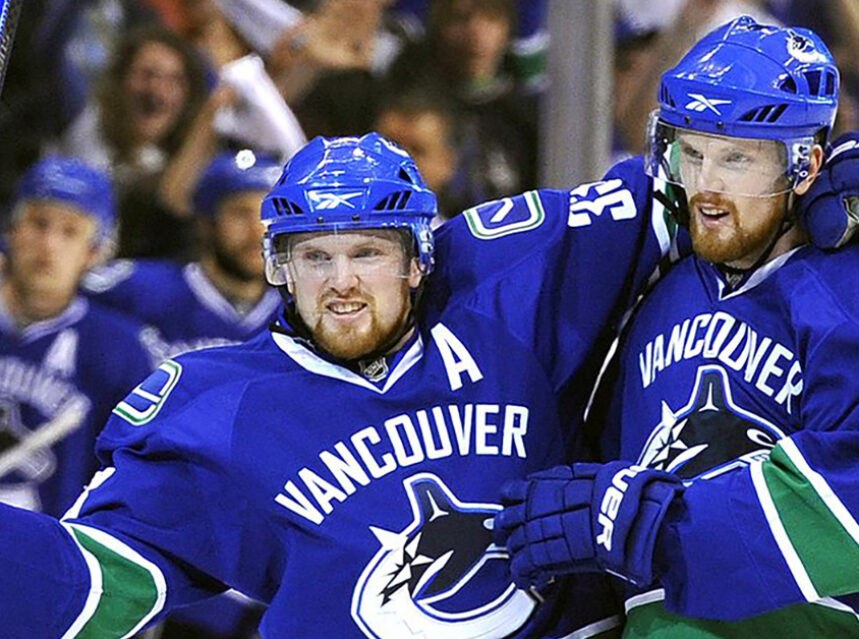 The Vancouver Canucks are flying the Canadian flag high and proud after pulling off one of the biggest upsets of the Stanley Cup playoffs, ousting the defending champions St. Louis Blues in the first-round series 4-2. Next up: second-round series with the Las Vegas Golden Knights.

And yet: here they are, Canada’s last hope for the 2020 Stanley Cup, taking on the Las Vegas Golden Knights in the Western Conference semis, which begins on Sunday.

Hmm…is this going to be a #wethenorth moment?

This was only ever supposed to be a learning experience for an inexperienced side; well, so said the punditocracy. Clearly, they must have not received the memo. And they’re playing as if they intend to stay a while.

“We have a lot of heart and a lot of will in the locker room,” said veteran Jay Beagle, who opened the scoring in Friday’s statement victory with an unassisted goal at 3:45 of the first period. Beagle later helped out on a Tyler Motte goal in the third. Adding “that will to win, that hunger to win, I saw it from Day 1 when we came in. We’re kind of seeing what we all in the room knew already. But we’re seeing it now in the playoffs.”

The Canucks arrived to the Western Conference bubble in Edmonton with a core of young players brimming with youthful exuberance and enthusiasm, but decidedly short on playoff experience. The quintessential underdogs of the playoffs.

The Canucks took it to the defending champions St. Louis Blues right from the start. Reeling off back-to-back wins in the first two games, the Canucks took the 2-0 series lead against the odds.

Although the St. Louis Blues did perk up in games 3 and 4 to draw the series at a level and make a fist of it, Vancouver remained undeterred. In fact, they bounced back in spectacular fashion in game 5, coming back from a 1-3 deficit to win 4-3. Then carrying that confidence and momentum into game 6, the Canucks put the final nail in St. Louis’ coffin with a commanding 6-2 victory on Friday.

Separately, the Canucks emerged as the last Canadian team still alive in the playoffs, albeit as the longshots to win the Stanley Cup in the broad spectrum of the field. Earlier on Friday, the Montreal Canadiens bowed out of the first-round of the playoffs behind a 3-2 loss to the Philadelphia Flyers (4-2 on the series). The Dallas Stars, meanwhile, dumped the Calgary Flames out of the playoffs on Thursday, following a blowout 7-3 win (4-2 on the series).

The second round of the NHL playoffs is set to get underway on Saturday, with a Western Conference matchup kicking off the first of four final eight matchups: Colorado Avalanche versus Dallas Stars. The Colorado Avalanche are one of the hot favourites in Pinnacle [Full review here]to win the Stanley Cup this season, so it comes as no surprise that the second-round series against the Stars is tipped wholeheartedly in their camp.

Sunday’s slate of games features the plucky Canucks taking on the Golden Knights with the series cornered firmly in the latter’s camp. Not unlike the Avalanche, the Golden Knights rank amongst the top betting favourites to emerge triumphantly. Consequently, they’re the massive favourites over the Canucks.

Interestingly, both Western Conference matchups are rather lopsided betting affairs, where the gap between the favourite and underdog is huge.

On the flip side of the coin, the Eastern Conference semis is a total tossup in the betting, in which the lines are blurred between the favourites and underdogs. Sunday’s marquee clash between the Tampa Bay Lightning and the Boston Bruins is tipped with the Lightning at early doors, but the Bruins are very much in it with a real shot of advancing.

The same can be said of Monday’s clash between the New York Islanders and Philadelphia Flyers. While the series is tipped in favour of the Flyers, the Islanders aren’t being dismissed out of hand.

All in all, it’s an intriguing line-up that heads into the second round of the NHL playoffs and advancement is anybody’s for the taking. May the best teams win.