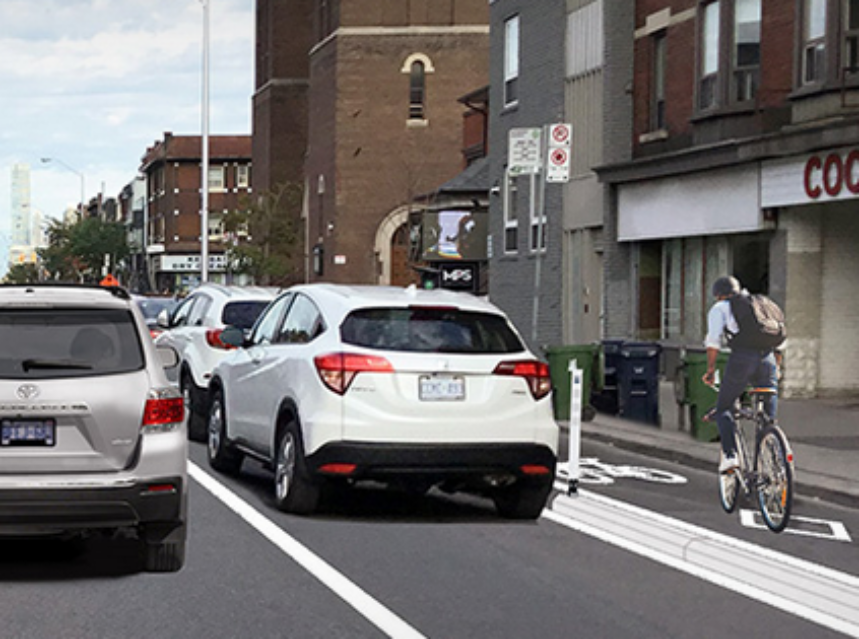 TORONTO, ON., May 25, 2020 — Today, Mayor John Tory announced that the City of Toronto is planning to install 40 additional kilometres of cycling lanes in order to increase active transportation as part of anticipated changes in traffic patterns as a result of COVID-19.

A Toronto staff report is scheduled for consideration by City Council later this week proposing an expanded cycling network to allow people on bikes to move around Toronto safely, to better connect those on bikes to the places they need to go, and to mirror major transit routes.

The proposed plan includes flexibility so that bikeway installations can be adjusted based on considerations such as changing traffic volumes, and the evolving needs of residents and businesses in the wake of the pandemic.

Where the proposed additional bike lanes will be located

If approved, the cycling network would be expanded quickly through temporary installations by repurposing curb lanes along several key corridors. The first proposed bike lanes will be located along:

“From London to New York to Mexico City, cities are taking action to make it easier and safer to cycle, in order to provide for safe physical distancing,” said Councillor Joe Cressy (Ward 10 Spadina-Fort York). Building a bike lane along University Avenue means that the front-line workers in hospitals, medical clinics, and doctor’s offices can get to work each day safely. It also means that people who live in our community will have a real alternative to driving or the TTC – freeing up space so that those who need it can safely physical distance on our subways, streetcars, and buses.”

The report also addresses other gaps in the network including locations in North York and Scarborough and includes acceleration of the Bloor West Bikeway Extension (from Shaw to Runnymede).

“The Bloor Street West bikeway extension has been underway for some time,” said Councillor Gord Perks (Ward 4 Parkdale-High Park). The timing to move it along couldn’t be better as we all begin to head towards the next stages of recovery and beating COVID-19. Finishing the bikeway sooner means safer bike lanes and more choice for people who are travelling outside.”
–

As part of the City’s focus on main street revitalization in the wake of COVID-19, the City is also proposing to create more public space and patios, make a more beautiful street, and pilot active transportation infrastructure on the Danforth from Broadview Avenue to Dawes Road.

How the bike lanes will be created

Most of the ActiveTO proposed initiatives aimed at expanding the cycling network are quick-start installations using temporary barricades and include minimal change to the existing street design.

Meanwhile, A more transformational ‘Complete Streets’ redesign approach is proposed for Danforth Avenue in order to support the main street character and local economy, and in keeping with the objectives of the Danforth Study that’s currently underway. Everything from roadway width to a complete street design with the potential for on-street protected bike lanes is being considered.

While vehicle traffic volumes are currently very low, City traffic data shows that a significant number of people have continued to rely on cycling as an important transportation choice over the past several weeks. The data also suggests that many people are choosing cycling instead of riding transit, and typically cycling volumes in Toronto increase as temperatures warm up.

The ActiveTO program was developed by Toronto Public Health and Transportation Services to provide more space for people to be physically active and improve physical distancing as part of the City’s restart and recovery in the wake of COVID-19.

Other programs as part of ActiveTO include major weekend road closures along City trails to make space for people, alleviate weekend and holiday crowding, and ensure there is room to be physically active and respect physical distancing. ActiveTO also includes a plan for more than 50 kilometres of Quiet Streets currently being planned or installed around the city. Quiet Streets are neighbourhood streets that are shared space for people, bikes and slow moving, local vehicle traffic.

More information and details about ActiveTO are available at toronto.ca/activeTO.

There are now 79 CurbTO Zones

The CurbTO program continues to immediately address locations where there is sidewalk crowding and temporary parking concerns around businesses. More businesses are opening and offering pick-up, take-out and delivery services and have created store access line-ups to maintain physical distancing requirements, as recommended by Toronto Public Health.

So far, the City has installed 79 CurbTO pedestrian zones and temporary pickup zones, and widened three sidewalks for space. There have been more than 260 requests city-wide for zones by Councillors, BIAs, Community Agencies and businesses. Details about CurbTO, including a map, as well as links to the business application are at toronto.ca/curbTO.