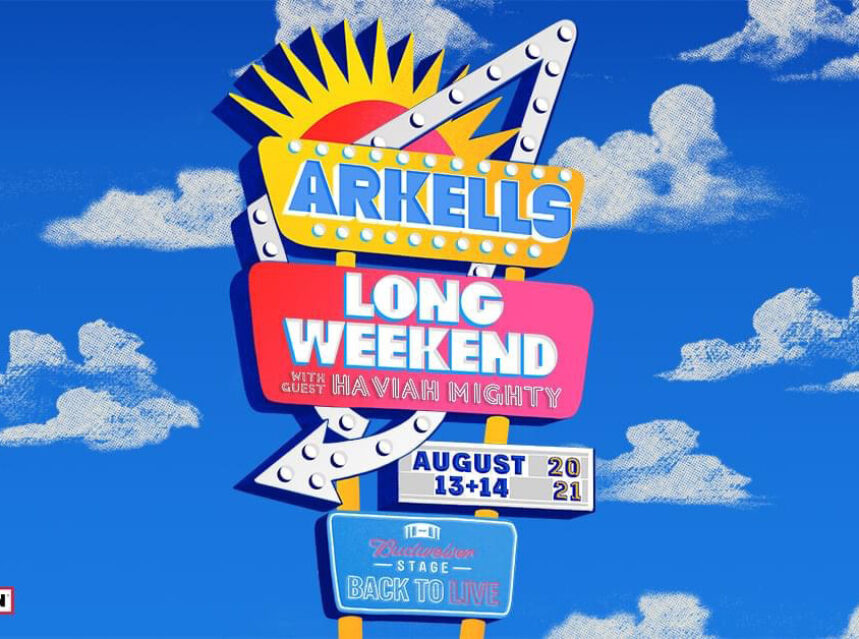 A good sign that Toronto is beginning to return back to normalcy after being in virtual pandemic slumber since spring 2020, is concert announcements are beginning to crop up. On Tuesday, the Arkells, one of Canada’s biggest bands just announced that they will be playing two shows at Toronto’s Budweiser Stage August 13 and 14.

Hamilton’s beloved prolific hitmakers made the announcement on all their social media outlets Tuesday afternoon. The announcement reads: “Our first concerts in 16 months. Outdoors. Together Again. Let’s do it right. #ArkellsLongWKND Aug 13 & 14 at @BudweiserStage
With the formidable @haviahmighty. Tickets on sale Friday at 10 AM. Pre-sales start tmrw at 10 AM. Tag a friend who needs to know. Tix: arkellsmusic.com/live. Poster by @mjdeangelis

“These shows are billed as ARKELLS LONG WEEKEND because it’ll feel like a celebration that we’ve yearned to have together. There’s no better place for it.”

That’s right, with Step Three of Ontario’s Roadmap to Reopen, outdoor concert venues are allowed with up to 75% capacity to a maximum of 15,000 attendees.

The Arkells have been super productive throughout the pandemic, releasing several new hit songs including most recently All Roads, featured in a TV commercial promoting the importance of getting vaccinated as part of Canada’s Together Again campaign. They also released “You Can Get It,” “Quitting You,” “Pub Crawl,” and of course their hit track, “Years In The Making.” The latest song to be released is “One Thing I Know.”

Arkells say, “It wouldn’t feel right to announce Blink Once without a song that’s sure to put you in the mood for a proper Arkells live show. This is why “One Thing I Know” is here to get the party started. This song is about not being ashamed of who you are and where you come from. The best version of yourself lets your colours show – to feel free, weird and unburdened by all the things out of our control.”

Oh and let’s not forget that Arkells also released new stripped down takes of previous hits with their Campfire Chords album last August.

Just how many tickets are allowed to be sold for these shows remains to be seen, but in theory the entire venue is open to the outdoors. Budweiser Stage holds 16,000 according to their seating chart, so it is possible that 12,000 tickets can be sold. It depends on how the Ontario government classifies the 5,500 seats that are located under the roof in the first three sections of seating. The last section of seating at the back is in the open air and seats 3,500. Then the lawn can hold an additional 7,000 people comfortably.

The Arkells show will be the first time fans get to hear live, all the songs from the upcoming Blink Once album.

Why the new Arkells album is titled Blink Once

“Now more than ever, it seems our lives can change in the blink of an eye. We began working on this album before the world changed and this title felt right given where we’ve collectively landed. Everyday you wake up and you think you know a lot of stuff, then it turns out – you don’t,” the band says.

“Blink Once was started in LA and completed in Toronto. Who knew that when we started rolling it out with “Years In The Making” in 2020, we were literally kicking off a global multi-year come back to reality. These songs have LEGS. It’s truly exciting to officially launch the Blink Once era. The gang’s all here: “You Can Get It” is STILL your fave pump up jam of the summer (#ForzaBroughtMeHere), and we are so proud to lend “All Roads” to the #TogetherAgain campaign.

These shows of course as mentioned are operating as reduced capacity shows in accordance with provincial regulations – so hop to it!

Tickets for the Arkells shows go on sale Friday at 10 am with pre-sales starting Wednesday, July 14 at 10 am.