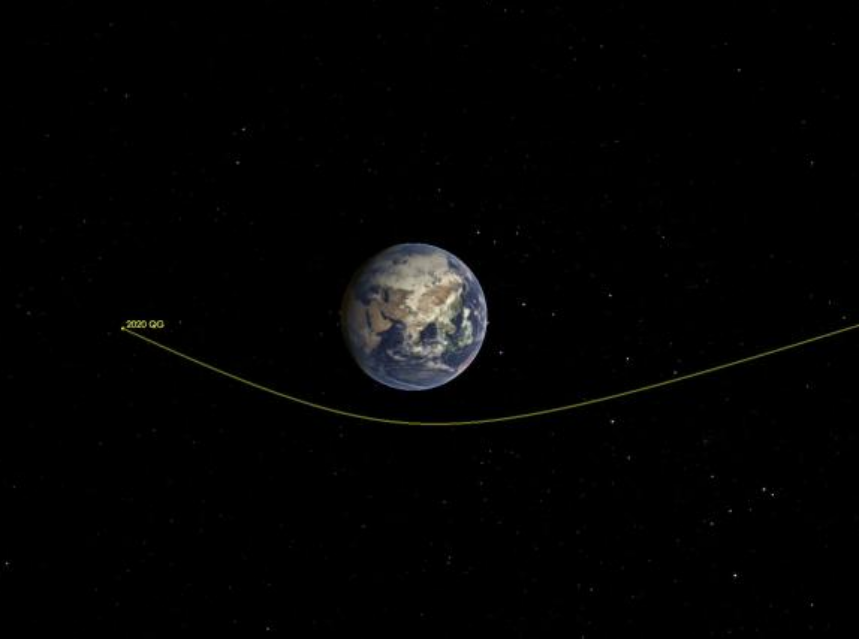 August, 25, 2020 — On August 16 around 10 am an asteroid the size of an SUV had the closest near miss with Earth ever recorded. According to NASA, the pick-up-truck-sized asteroid known as 2020 QG was first detected at the Palomar Observatory in California six hours after it passed by our planet Earth.

“The asteroid approached undetected from the direction of the sun,” Paul Chodas, the director of Nasa’s Center for Near Earth Object Studies at NASA’s Jet Propulsion Laboratory in Pasadena, California, explained. “We didn’t see it coming,” said Chodas.

Travelling at almost 12.3 kilometres per second – a little slower than average, Chodas noted – 2020 QG was first recorded as just a long streak in a wide-field camera image taken by the Zwicky Transient Facility. The image was taken six hours after the closest point of approach as the asteroid was heading away from Earth. A sky-scanning survey telescope funded by the National Science Foundation and NASA, the Zwicky Transient Facility is based at Caltech’s Palomar Observatory in San Diego County. NASA’s Near-Earth Object Observations Program funds data processing for NEO detections.

Asteroid 2020 QG came within 2,945 kilometres of the Earth’s surface but experts say due to its relatively small size (Telescope observations suggest the object is between 2 and 5.5 metres wide), had it entered Earth’s atmosphere it would most likely have burned up so significantly that it wouldn’t cause as much damage as some of the much larger ones that have passed by almost as close.

However, NASA says if this asteroid had reached Earth it would have the explosion high in the atmosphere would have a force similar to that of the atomic bombs the US dropped on Japan in 1945.

“Yesterday’s close approach is closest on record, if you discount a few known asteroids that have actually impacted our planet,” said Chodas.

So why was the asteroid undetected until afterwards? “Asteroids are detected using optical telescopes only (like ZTF), and we can only search for them in the night sky,” said Chodas. “The idea is that we discover them on one of their prior passages by our planet, and then make predictions years and decades in advance to see whether they have any possibility of impacting.”

NASA has been moving forward with a plan to address these gaps in its asteroid-hunting program. The agency has been allotted nearly $38 million U.S. to develop a space telescope that could detect asteroids and comets coming from the sun’s direction.

What is an asteroid?

According to NASA, asteroids, sometimes referred to as minor planets, are rocky remnants left over from the early formation of our solar system about 4.6 billion years ago. They range in size from Vesta—the largest at about 329 miles (530 kilometers) in diameter – to bodies that are less than 33 feet (10 meters) across. The total mass of all the asteroids combined is less than that of Earth’s Moon.

NASA says “Asteroid 2020 QG goes down on record as the closest known non-impacting asteroid; many very small asteroids impact our planet every year, but only a few have actually been detected in space a few hours before impacting Earth. On average, an asteroid the size of 2020 QG passes this closely only a few times a year.”

NASA ‘s goal is finding 90% of the near-Earth asteroids that are about 140 metres or larger in size. They say that these “larger asteroids pose a much greater threat if they were to impact, and they can be detected much farther away from Earth, because they say their rate of motion across the sky is typically much smaller at that distance.”

“It’s quite an accomplishment to find these tiny close-in asteroids in the first place, because they pass by so fast,” Chodas said. “There’s typically only a short window of a couple of days before or after close approach when this small of an asteroid is close enough to Earth to be bright enough but not so close that it moves too fast in the sky to be detected by a telescope.”