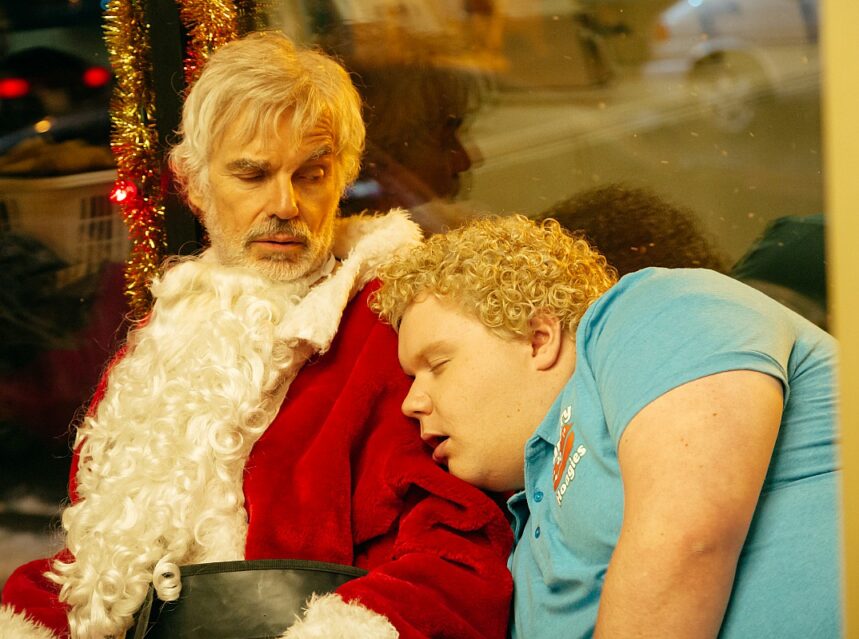 If you are one of those who hates the saccharine ambience that some people create around Christmas to the point that you have grown an extremely cynical attitude toward the whole festivity, this is a movie for you. In fact, it is the sequel to a previous equally outrageous story.

This time Marcus has come with a new scheme which also involves Willie’s disgraceful mother, Sunny (Kathy Bates): the trio would infiltrate a charity organization with the whole purpose of stealing the money it has collected. To achieve their goal, Willie takes a job as a Santa at the charity, while Marcus is given an elf costume. Sunny is also in action, including an occasion in which the trio goes to a social charity function at a wealthy home, and she steals anything of value that she can get her hands on.

Things get complicated on another front for Willie when Thurman Merman (Brett Kelly) who thinks that Willie is his father, arrives in Chicago and ends up in the choir of the charity. But don’t expect much father-son bonding here, though.

Montrealers will be able to recognize a few familiar sites since this city was used as a stand-up for Chicago. Here we have a real winter after all! A fight involving Willie and another Santa takes place around the John A. MacDonald monument at Place du Canada, and you can also see parts of Peel St. while the University Club stands for the charity organization.

“Bad Santa 2” is not better than the previous installment; it has some few offensive lines, and some funny moments especially in the scenes with Willie and the sexually-obsessed charity director Diane (Christina Hendricks) but nothing too shocking either. Expect a lot of swearing and lots of politically incorrect exchanges.